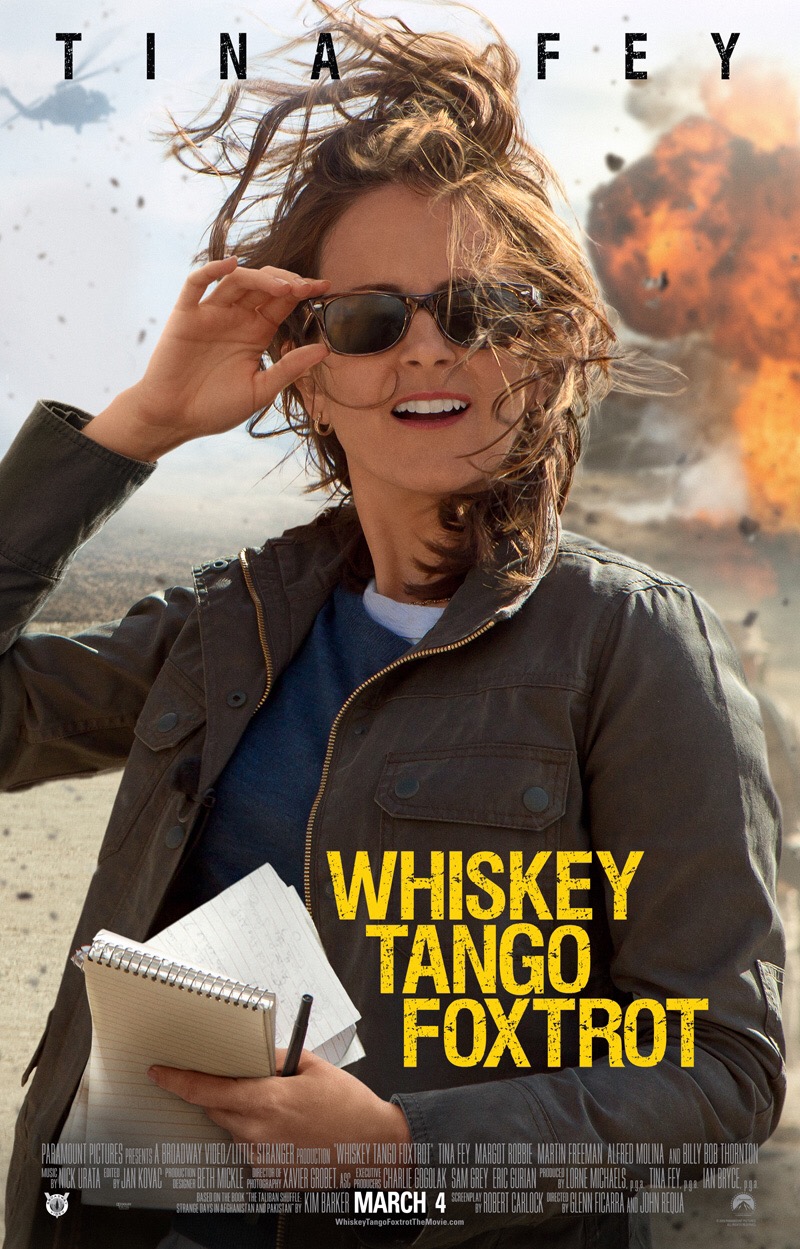 Based on the memoirs of foreign war correspondent Kim Baker, Whiskey Tango Foxtrot covers the years that Baker spent in Afghanistan, trying to find her niche in life while also trying to forge her way in a setting that doesn’t typically support women carving niches.

The film is anchored by an incredibly strong and game cast (Mike alpha romeo romeo yankee mike echo, mike alpha romeo golf oscar tango romeo oscar bravo bravo india echo!) who deliver at every turn.  A lot is asked of each of them and they always come through – whether it be in a comedic moment, a dramatic one, or a terrifying war born juncture – and elevate the film to be a much greater experience than it would be without them.  Tina Fey, Margot Robbie, and Martin Freeman in particular bring their A games and are to thank for any success this film manages to achieve.

And the film is lucky to have them because, otherwise, it’s a bit of an uneven affair.  The biggest problem is that the directing and writing often get in the way of the film, itself, and seemingly work to undermine its own identity.  There are plenty of instances where the cast is playing comedy but the music, camerawork, and framing is playing drama.  It’s bizarre and while a film never has to fit into a single genre, directors Glenn Ficarra and John Requa try to force it to be too much at once.  Maybe with two directors there also came two different visions.  Whatever the cause, as a viewer, I frequently felt disoriented.

It’s not as though the individual parts of the film are subpar.  The comedy is great (again, entirely thanks to the cast) and the drama is weighty and powerful.  The comedy does, however, stop altogether about halfway through the film.  From there, for any who come in hoping for wall-to-wall laughs, the story begins to plod and eventually drags itself across the finish line.  It doesn’t quite know when or how to end and would have been well-served by trimming five or ten minutes or by finding a way to reinvigorate the picture by bringing the wit and charm that had been abandoned back, though I admit that the subject matter makes that difficult.

When it comes down to it, Whiskey Tango Foxtrot isn’t a bad film.  It’s a poorly balanced film that is completely saved by its overachieving cast.  This is an unfortunate case of the filmmakers simply not knowing their audience.  They aren’t getting what they’re expecting: the zany movie that the lead star and title imply. It’s a war story that has some solid comedy sprinkled throughout the first two acts, or so, and a cast that saves it and makes it worth a look.