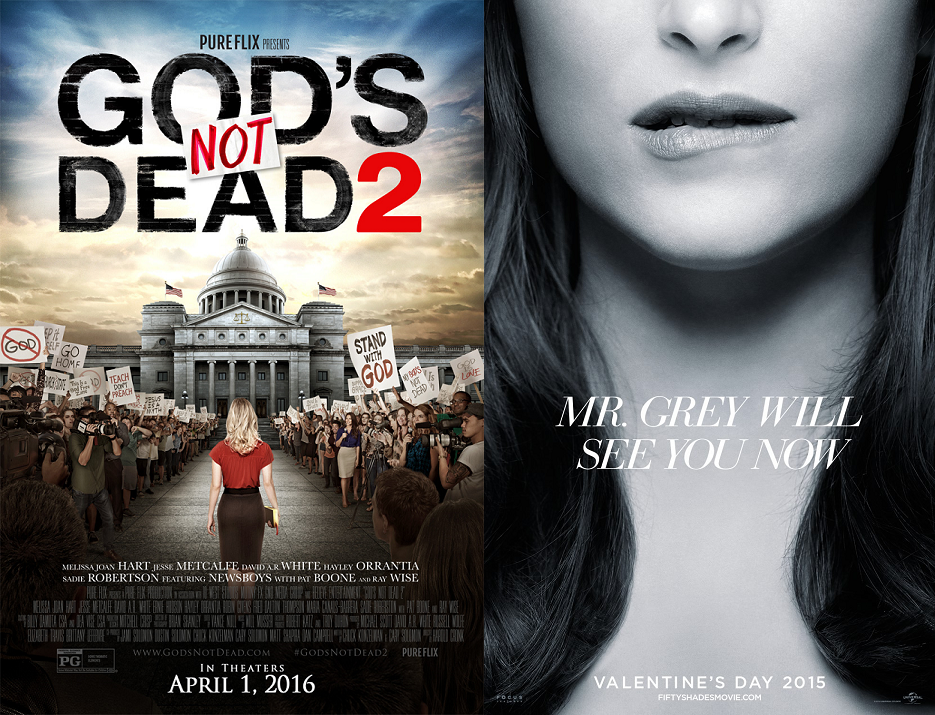 While sitting in the theater waiting for Eddie the Eagle to begin, I was hit with a deluge of mostly-awful trailers (before finally seeing the torture end with the X-Men: Apocalypse trailer).  One of these was the trailer for God’s Not Dead 2, starring Melissa Joan Hart.  This is the sequel to 2014’s Kevin Sorbo vehicle, God’s Not Dead, which managed to gross $60 million domestically and is now responsible for this sequel.

Before I get into this, I want to make two things clear.  Firstly, I will only be discussing the trailer(s).  I have not seen the first film.  Nor will I.  I will also not see the second film.  So, there will be no discussion of the full films, themselves.  I can assume that the ideas and stories presented in the trailers are echoed in the films (otherwise, what’s the point?) and that’s all I need to make my point.  Secondly, I’m only writing about the ideas as used by the film(s) and the responsibility the filmmakers have to their craft and to the art of filmmaking.  I’m not speaking out against any particular belief system, although I would wager that the filmmakers involved, here, would try to convince you otherwise.  I’m not particularly religious, myself, but I know a lot of great people who are.

Another film that I need to address in order to draw my comparison is last year’s Fifty Shades of Grey.  I’ve said many times in my life that any story has a right to be told and any film has a right to exist.  That’s true of the God’s Not Dead series and that’s true of Fifty Shades of Grey.  Even if they’re among the worst films ever made, they have a right to exist and to be seen.  But I’m not here to discuss the quality of these films.  I’m here to discuss their lack of ethical and moral responsibility.

There are many characters in many films, TV shows, books and all other forms of entertainment who are not good people.  They do horrible things.  But, these things are presented as such; they are presented as being bad.  They aren’t portrayed as virtues.  They aren’t endorsed by the filmmakers.  They aren’t glorified.  They’re just part of the story.  Including them is a necessary part of responsible filmmaking.  It always has been.

Then, Fifty Shades of Grey came along.  Whereas Christian Grey should have been fully and unquestionably presented as an abuser and a manipulative victimizer, I started to notice some disturbing things surrounding the audience reception to this movie.  Some women were talking about how “hot” and “attractive” he was.  They were gushing over him.  And some were even seeing the movie multiple times to get more of him.  Forget the fact that people like Christian Grey have used, hurt, and even permanently scarred so many others.  People who will never fully recover.  And I’m not even necessarily talking about the sex; I’m talking about the emotional abuse.  This isn’t a column on that movie, though, so if you need more detail on that, go here.  My point is that the filmmakers preyed on weak-minded and insecure audience members to take their money by exposing them to a harmful world view that they didn’t have the perspective or maturity to take into a proper context.

That leads us to God’s Not Dead 2.  First, I need you to watch the trailer.  I know, I know.  I’m sorry for inflicting this on you, but you need to see it in order to be a part of the conversation.  So, here you go.

Is your head exploding?  If not, it should be.  And here’s why.

Let’s start with the inciting incident in the trailer.  A student asks Hart’s teacher character a Christianity-related question and she gives him a Bible-related answer.  This, in and of itself, should not be a problem.  As presented here, there was nothing wrong with her behavior.  And the trailer stresses that.  No problems, so far.  Then, the student texts . . . something . . . and we’re informed that Hart (which I will refer to her as, since I don’t know her character’s name) is in huge trouble for quoting scripture in the classroom.  From there, the whole world is against her and everyone is just so EEEEEEEEVIL!  Did you see how that judge broke his gavel?  EEEEEEEEVIL!

There are so many problems here that it’s tough to decide where to begin.  I’ll start with the student.  If, as portrayed in the trailer, the student started a smear campaign against the teacher, lying about the context of her quote and the intentions behind it, in order to get her in serious trouble and/or get attention on himself, then that’s the story.  The story is the student.  Because, I can tell you that this is a real-world problem.  Many modern students are often entitled and incapable of feeling empathy and that’s a severely dangerous combination.  When they don’t get what they feel they are deserved (or maybe just in an effort to make themselves look cool to their friends), they will outright lie about a teacher in order to either get their way or attain revenge.  This happens.  A lot.  So, that’s the story.  If that had been the film . . . if it had been about an unfairly accused teacher who leaned on her faith to get through a tough time and came out in the end with a victory against a malicious student, then that would be not only fine, but a responsible and relevant tale in this day and age.  But the story according to the trailer doesn’t stop there.

From there, the entirety of non-Christian society unites against Hart (and her lawyer, portrayed by Jesse Metcalfe) and becomes one giant antagonist, much like the Flood in Halo.  This is where the trailer portrays a film that ceases to be art and becomes propaganda that – much like Fifty Shades of Grey – targets the gullible and weak-minded in order to strip them of their money.  How Christian of them.

The true issue at hand, rather than the alleged issue of Christian persecution, is dual in nature: freedom of religion and separation of church and state.  And these issues actually dovetail quite nicely.

The freedom of religion issue is actively working against the film’s message, as the film is ironically justifying persecution of other religions in favor of Christianity.  It complains about Christianity being removed from schools and other public arenas.  What it fails to acknowledge is that it’s only removed in an official capacity in order to keep any one religion from being endorsed by the government.  It’s not an anti-Christianity movement.  It’s a pro-melting-pot movement.  If Christianity is indoctrinated into all public arenas, with formally organized and performed Christian rituals, then other religions are being persecuted and marginalized, thereby diminishing their freedom of religion.  Hence, separation of church and state is necessary in order to follow through on the freedoms and open-arm-promises that the United States has always proudly proclaimed.

In justifying close-minded persecution of any non-Christian-based religions, the film must reinforce harmful falsehoods in order to manipulate its audience into feeling anger and passion about their own perceived persecution.  In reality, this kind of thing would likely never go to trial.  That’s a silly notion.  The teacher may have been told to be careful about her wording, even if the school fully believed her side of the story, just to placate an unreasonable family.  But, even if, by some miracle of stupidity, a trial took place, people would be fair-minded about it.  If she was actively teaching Creationism over evolution then, yes, that’s a problem.  Otherwise, for something trivial like this, it’s not a big deal.  The public wouldn’t be that invested.  It would barely get any media coverage (if it got any at all), unless it got some based on it being an absurd circus and a waste of taxpayer money.  And a judge certainly wouldn’t be shouting and breaking his gavel.  Furthermore, nobody cares if an individual Christian takes it upon themselves to pray in school or a restaurant or a sporting event or wherever.  That’s their right and nobody wishes to take it away.  That’s never even been in the discussion.  This is where it appears that non-Christians have a problem with Christianity that they don’t with other religions.  But the problem isn’t with the religion or its followers – not as a rule.  The problem is with things like God’s Not Dead 2, which expresses a heightened entitlement and double-standard that many practitioners of Christianity possess.  It’s not about what others choose to believe; it’s about how it affects their behavior with those who don’t share the belief.  But that’s not the message that this trailer is delivering.

This is more Fox-News-style fear mongering designed to trick people out of their money.  Yes, it’s insulting that so many people who persecute others look for justification to label themselves as the victims but I’m frankly far more offended as a film lover.

Film is a medium that can and should be used to (other than entertain, which should always be the primary goal) open minds and expand people’s horizons.  Film can highlight new perspectives on ourselves and the world around us.  Film can be beautiful.  But when it’s used to actively encourage thinking that is harmful – to ourselves or the world around us – film stops being art.  Both 50 Shades Of Grey and God’s Not Dead 2 are guilty of this.  But when it’s used to further strengthen a sociopolitical divide, it’s flat-out propaganda.  This is the most damning sin of God’s Not Dead 2 and makes it a far worse offender than Fifty Shades.

If you’re determined to help Make America Hate Again, God’s Not Dead 2 opens on April 1, which is appropriate for such a joke of a film.  If you’re a Christian who wants your religion to be viewed as something to be respected (which, at its heart, it is), and who claims to love film, then avoid this travesty.

My hope is that nobody falls for this drivel and instead opts to see a film aimed at doing good in the world and bringing us all together, rather than driving a larger wedge between us.  Go see Zootopia, instead.  Be part of the change that this world – and this country – so desperately needs.