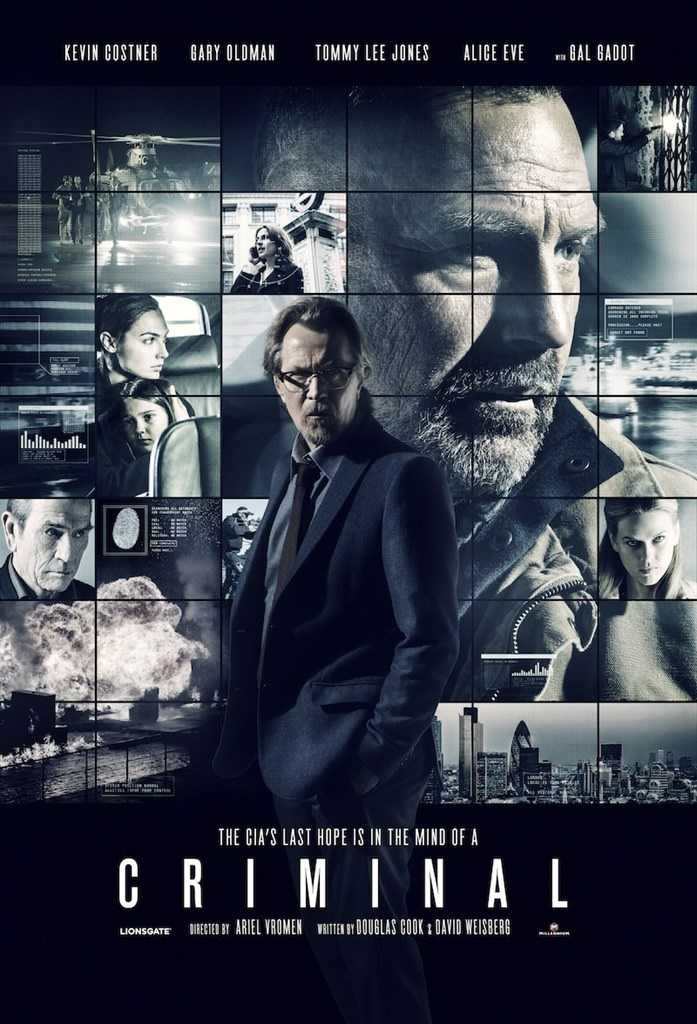 I typically love viewing experiences like this.  I went into Criminal with no idea regarding what I was about to watch, other than the general tone and genre as well as the amazing cast.  In fact, it was the cast that got me into the theater.  It’s hard to argue with Gary Oldman, Kevin Costner, Ryan Reynolds, and Tommy Lee Jones.  And after Batman v Superman: Dawn of Justice, who doesn’t want more Gal Gadot?  So, the promise of seeing all of these talents in one film was enough to get me into the theater on a Friday afternoon and mark the fifth-of-the-way mark on my March to 100.

I really hate being negative, though.  I look for the good in every movie I see.  And while there was a little good, here, there was only a “little” good.

The main issue is unquestionably the script.  I am not against movie characters not always being the most intelligent people.  Real people aren’t always smart, so not all fictional people should be, either.  But fictional people who should, by necessity, be smart should then naturally be written that way.  The police/C.I.A. in Criminal make Chief Wiggum and the Springfield P.D. look like Seal Team 6.  I’ve never seen such an incompetent group of law enforcement – real or fictional – and am proud to say that I would have been incapable of creating such a group, myself.  This includes Gary Oldman’s chief/lieutenant/whatever-he-was.  I don’t quite grasp why Oldman took this part.  (Come on, man, you were Jim Gordon, once!  Have some standards!)  In addition to that, he was just wasted, here, with no real moments or opportunity for him to do what he does so well.

It doesn’t end there.  The film goes for a Silence of the Lambs tone and vibe but that film had a constant energy flowing through it and the viewer always felt captivated by the story.  Criminal is a Lazy Sunday “thriller”.  There is no energy, no sense of excitement, and no urgency in almost any aspect of the movie.

The score by Keith Power and Brian Tyler doesn’t help matters.  Soft and methodical, the duo tries to create a sense of dread but only succeeds in creating a sense of serenity.  The film really needs them to deliver and it felt to me like they misread the intent of the entire package.

The dialogue tries to be funny at times and fails at every attempt.  How the viewer is supposed to feel comfortable laughing at the plight of the Reynolds/Costner duo, I can’t understand.  But the attempts are awkward, disorienting, and outright discomforting.

And Costner’s Jericho character is supposed to be a threatening maniac but – even when in his own right mind (so to speak) – he seems content to behave like a grownup Nelson Muntz (non-Simpsons fans might be lost reading this post.  Sorry about that.)  (Wait, no I’m not.  Why aren’t you a Simpsons fan?!).

As I mentioned, before, there is a little good and that lies within the cast.  Most of them feel bored and non-committal, but there are two standouts.  Firstly, Costner gives his all to his leading role as Jericho.  The character makes little-to-no sense, but that doesn’t stop him from doing his absolute best to make it work.  He sinks his teeth in and has a blast with it.

Secondly, Gal Gadot just shines, even when given little to do.  After her similarly scene-stealing role in the aforementioned Batman v Superman, I’m coming to believe that scene-stealing is just what she does, even when she doesn’t intend to.  She’s a walking ECP – electrocharismatic pulse.  She sadly is stuck in need of a rescue for half of her time in this film, but her character isn’t without fight or spunkiness, so it’s not a total loss.

And that’s it.  Costner and Gadot were the only aspects of this film that I enjoyed.  I really hate that, too.  I know people worked hard on this movie, as is the case with every movie.  I feel like I’m being dismissive of those efforts and their talents, which is not my intent.  But this particular project simply didn’t work.  Somebody should have learned from Itchy and Scratchy and Poochy and figured it out before it was too late (and there’s the hat trick!).