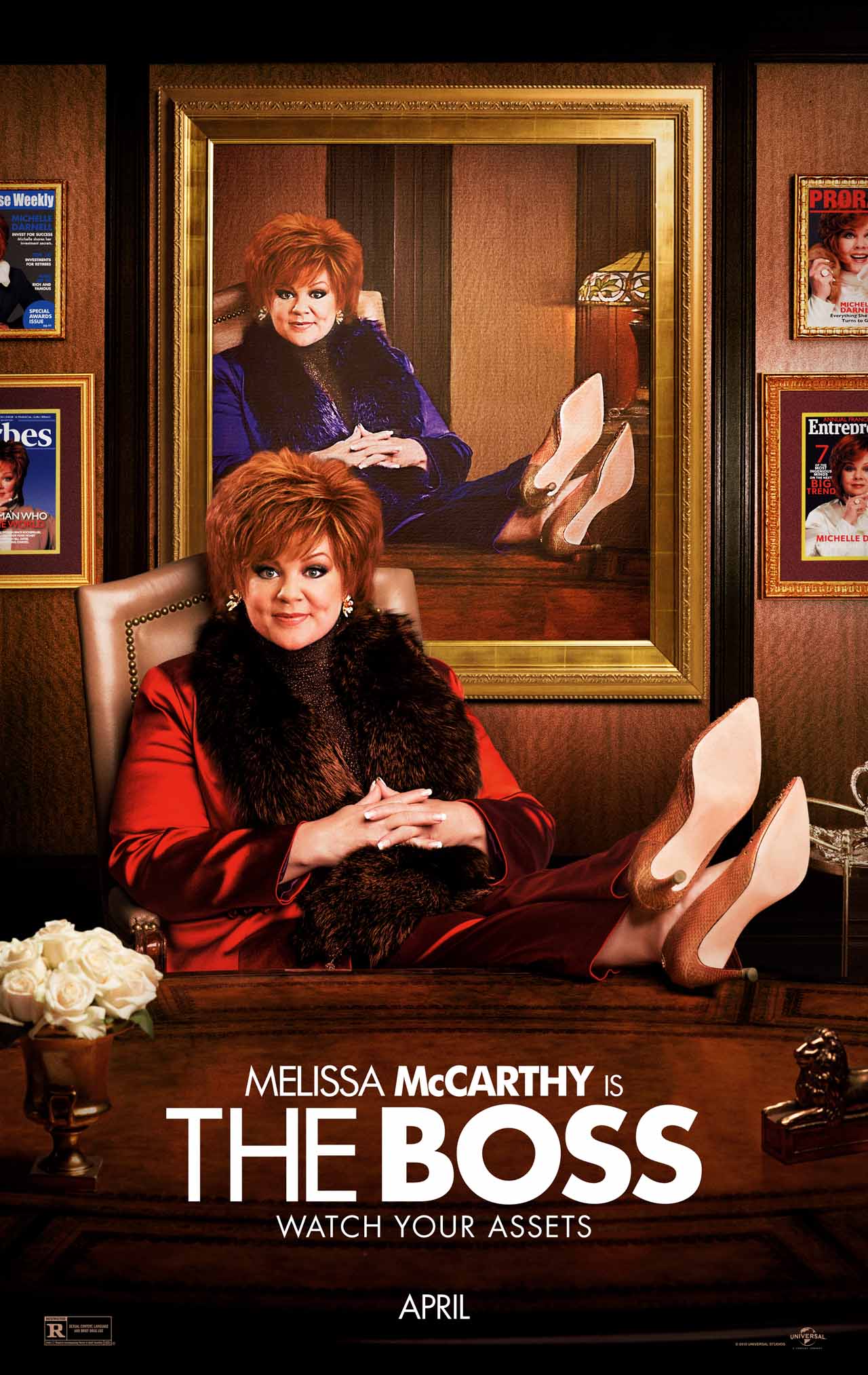 Real life alert!  This was supposed to be my twentieth movie of the year.  I had planned on seeing this last Monday after work but then I heard a clunking sound coming from the undercarriage of my car and I had to go to the service station, instead.  Then, Friday’s show times didn’t work as well with my schedule so my twentieth film ended up being Criminal.  I had to travel to see The Jungle Book in IMAX, so I needed Saturday for that one.  As a result, this one got pushed back again until I finally got around to seeing it, today.

Other than loving 2015’s Spy, I went into The Boss with no particular preconceived notions of what to expect.  Comedies are very hit-or-miss and I’ve liked Melissa McCarthy’s performances in other films but I wouldn’t say I’m a diehard fan who rushes out to see anything she’s in.  Kristen Bell is much the same way for me.  I like her, but not all of her movies.  But, as I mentioned, McCarthy’s Spy was a fun, clever, and all-around fantastic action/comedy and Bell has my all-time favorite comedy Forgetting Sarah Marshall on her resume (I also thought You Again was very underrated), so I went in feeling more optimism than pessimism.  And this is despite the generally wretched reviews.  I’ve learned to mostly ignore reviews for both comedies and horror films as critics (and general audiences, to be honest) often go into those two types of films not wanting to hurt their own self-perceived credibility by admitting that they liked what they saw.  And many people are way too sensitive when it comes to comedies, failing to grasp the core idea that comedies aren’t typically trying to make political or social statements.  They’re trying to take you by surprise with something witty or shocking and are usually trying to get you to laugh at the characters and not with them.  This was the case earlier this year with Dirty Grandpa, which I liked pretty well, but others found too “offensive” or “crude”.  Well, yes, if you take it seriously.  But by definition, most comedies aren’t meant to be taken seriously and you enter into them without understanding that, you’re failing as an audience member.

I also went in knowing that Forbes’s Scott Mendelson, one professional movie critic whose opinion I respect (even if I don’t always agree), loved it, so that made me feel a little better.

I didn’t love it or hate it.  With a lighthearted movie, I basically just want to be amused for the duration of the runtime.  The more I laugh, the better, of course, but I don’t need to be guffawing for two hours straight.  And I was amused.  I enjoyed both McCarthy and Bell.  McCarthy has brilliant timing and delivery and she can make practically anything work.  I do, however, feel like she’s better used as a sympathetic figure.  Audiences love her and want to love her in every role she takes on.  When she plays a character who is largely unlikable (as she does here), there’s a strong chance that audiences will reject it and spend their money elsewhere.  So, I’m not too surprised that, after a strong opening weekend, The Boss took a steep fall in its second weekend.

McCarthy also co-wrote the script so, depending on your perspective, she either shares in the credit or the blame for that.  I have no major problems with the script, myself.  It isn’t as consistently solid or witty as Spy, by any means.  But I laughed at times and had a smile on my face during most of what I saw.  It does fall into a common comedy cliché of pausing for a few moments to attempt and inject some gravitas into the proceedings, often by forcing complexities into the characterizations.  I’ve seen that done well but, more often than not, I would prefer to just keep rolling with the funny business.  I don’t need depth in a film like The Boss.  It feels shoehorned and everyone would have just been better off without it.

Kristen Bell has fallen into being typecast as the straight . . . man? . . . woman?  Okay, she’s usually the person that others bounce the jokes off of.  She does that well, but she can also do comedy, herself.  I hope to see her get to do more of that in the future.  She’s very endearing on-screen and I always like to see her name on the cast list.

So, The Boss was a middle-of-the-road comedy for me.  Better than some (like Bell’s awful When in Rome) but nothing approaching a classic.  If you like McCarthy and/or Bell, go in with tempered expectations and you’ll probably be okay.