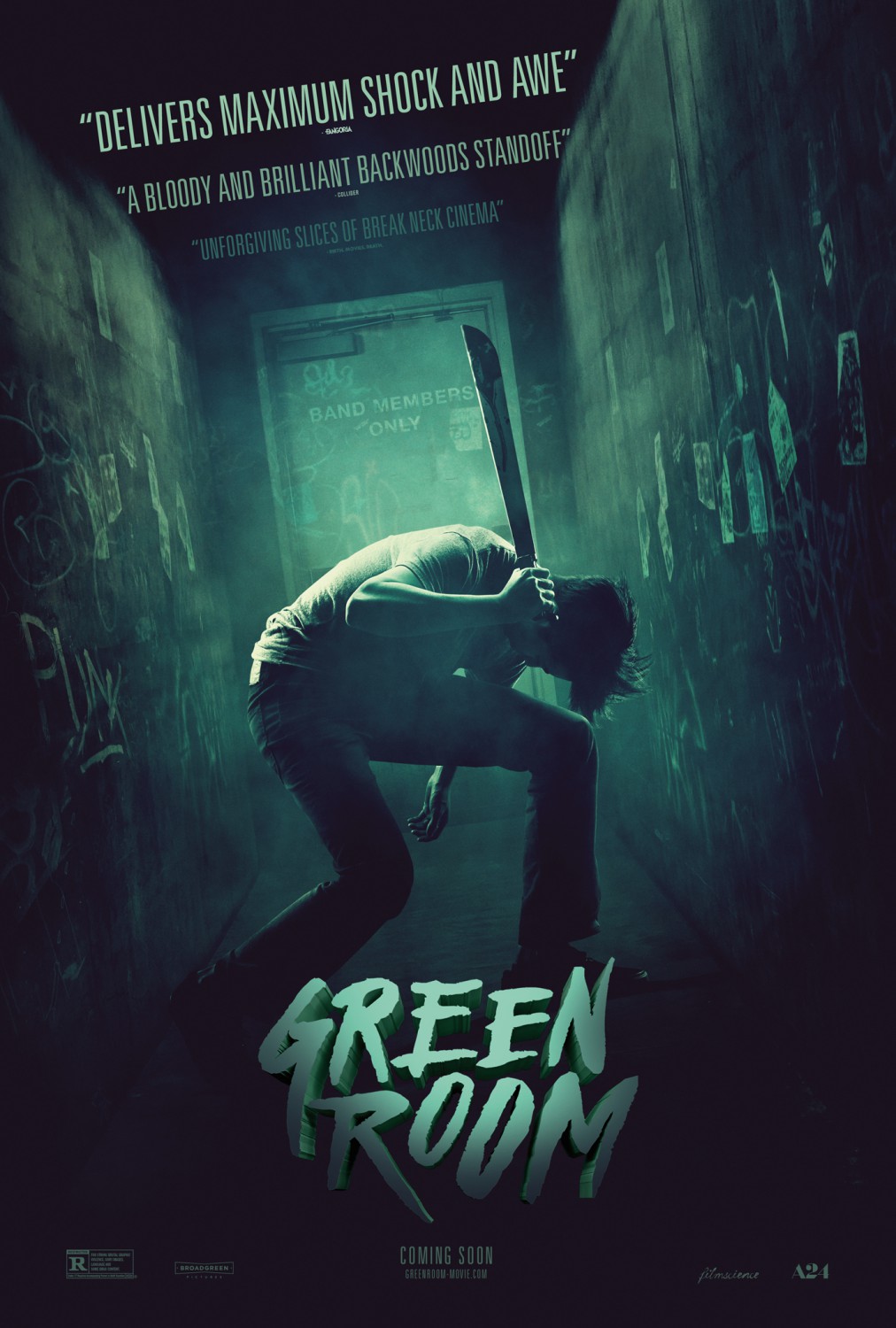 I wasn’t sure I was going to get to see Green Room in the theater, but I managed to get a chance, today.  My schedule has been tight, lately (my chance to see Hardcore Henry has already passed me by), but this one has been on my radar for a while, so I wanted to catch it while I could (this, as is often the case, required an hour-long drive).

It doesn’t start well.  Virtually none of the characters are likable in any sense of the word.  Our protagonists are an amateur punk metal band who, like the vast majority of amateur bands from nearly every genre, think very highly of themselves as “artists” while peddling “music” that is in reality entirely about the image they wish to inhabit/project and not about the art, itself.  At least the film is true to life in that regard.  These people don’t believe they need to actually contribute to society in any way or do anything to earn their spot on the planet as they go from dive to dive assaulting the ears of anyone who is unfortunate enough to be within hearing distance.

On the other side of the ring are their opponents.  Here we have the trashy, racist, redneck backwoods bumpkins who spend every waking moment of their lives tearing others down to build themselves up.  This might be verbally, but they generally prefer physically.  What’s theirs is theirs and what’s yours is theirs, too.  As bad as the emo-millennial demographic can be, these thick-skulled fear-mongers are the worst of America.

And that’s most of our cast, folks.  Nobody to get behind.  Nobody to cheer for.  And if you relate to any of these people, please either 1) reevaluate your life or 2) wait until you’re old enough to see R-rated films.  There is one saving grace in Imogen Poots’s Amber, who never gives us a reason to dislike her.  But she doesn’t really have a presence until about halfway through the film.

In addition, a couple of the characters are really stupid.  Not movie-stupid.  Real-world stupid.  And that can be okay.  I’ve stated before that film should reflect life and I mean that.  But one instance of outright stupidity involves 911 operators and emergency response teams.  These people aren’t stupid in real life and shouldn’t be stupid in film.  The majority of the events in this movie would in reality have been prevented by a clever 911 dispatcher who would have been trained not to fall for Team Redneck’s manipulations.  That is honestly the biggest flaw in the film, and it’s a big one.

So, the film almost completely lost me – especially for the entire first act.  I hung in there, however, and it got better.  Once it kicks into gear, it actually becomes rather compelling.  If you can get past the awful personalities and short-sighted writing near the beginning, the conflict attains a true sense of urgency, suspense, and tension as it builds through the rest of the story.  The way it escalates and the violence that results all feels very real and believable.  And, despite the way the characters were introduced, when push comes to shove, it becomes easy to get behind anybody if they’re against racist Nazi rednecks who are threatening to take over our country in November.  So I actually found myself firmly pulling for the punk band once things got rolling.  Of course, it’s intended that the viewer be rooting for them, but to have it happen by default is probably not the intention.

(Very mild spoiler regarding a conversation that takes place in the film that doesn’t relate to the overarching plot as a whole: early in the movie, the band members all ask each other who their “desert island band” would be and, desperately clinging to their self-styled reputations, they all name obnoxious punk bands who waste any musical ability they have on trying to win over the approval of the socially outcast.  Later in the film, when they feel their lives are in jeopardy, they revisit the question and, hilariously and brilliantly, feeling as if they want to die with a little honesty and truth, they start naming mainstream artists who actually focus(ed) on putting out music that was true to themselves.  The film almost fully won me back at this moment because, truly, as Keanu made a point about, we all really love the George Michaels of the world.  Only the truly strong are brave enough to own it.)

So, by the end of Green Room, I was enjoying myself.  It’s not good that it started out so rough but it’s a major compliment to say that a film is able to win me over in the middle.  That is much more difficult to do than to start out enjoyable and hold on to that good will for the duration.  Due to the chore of a first act, I didn’t enjoy it as much as I hoped I would, but I can’t truly hate on it, either.  Not as a complete film, I can’t.  I’m curious to see what director/writer Jeremy Saulnier brings us in the future when he focuses on more palatable characters.  So, if you like horror-thrillers, check it out.  But don’t expect to be too sad when any given character bites it.