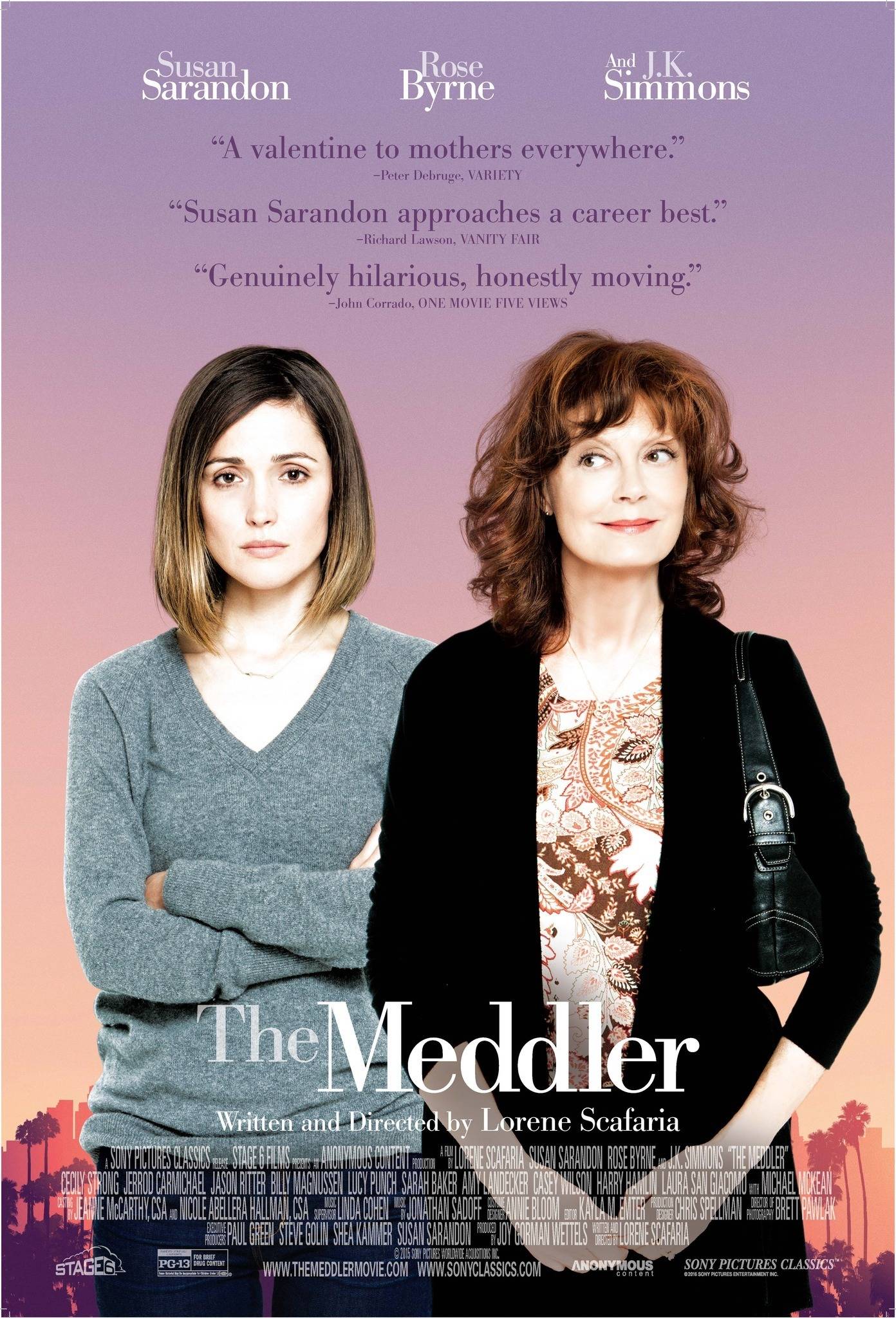 I had very little of an idea of what to expect out of The Meddler.  I chose to see it as part of my 2016 March to 100 because of the solid reviews, Rose Byrne, and J.K. Simmons (have you seen Whiplash?  If not, see Whiplash right now and get owned by J.K. Simmons.).

That’s not a knock on Susan Sarandon.  I’ve always appreciated and respected her work and contributions to entertainment.  Her heyday was just a little before my time, though, so I didn’t experience her career as it unfolded.

That being said, a lot is asked of her in The Meddler and she knocks it out of the park.  The entire film (expertly directed and written by Lorene Scafaria in her sophomore outing as a film director) is similar to a home cooked feast full of comfort food where everything is excellent but it just wouldn’t work without the perfect main course that works well with every other dish.  Susan Sarandon is that main course.

I’m not going to pretend that I’ve seen every Susan Sarandon project.  There are more that I haven’t seen than I have.  Not by design; it’s just hard to watch all of the old stuff when you’re also trying to watch all of the new.  But she delivers on a level that I didn’t expect and nails a performance that demands comedic chops, heart-wrenching drama, and everything in between.

Sarandon plays Marnie, a recently widowed mother to Rose Byrne’s Lori.  In addition to recently having lost her father, Lori is also just out of a long-term relationship.  The two of them must figure out how to go on with their lives and how to do it together, even though they each remind the other of the giant hole that has recently surfaced in their respective lives.  In those situations, some people run to family and others run away.  What happens when only two people are left and they’re one of each type?

Well, lots of things.  This is the type of movie that I put into a self-invented “Life” genre.  It has comedy, it has drama, it has ups and downs . . . just like a normal day in most anyone’s life.  I love that as I have always felt that those types of films feel the most genuine and, as a result, play better to audiences.

Along the way, even though this film is largely marketed as a comedy, we get a more serious Rose Byrne than we’ve seen lately in films like Neighbors and Spy.  On one hand, that’s a shame because she’s so great at comedy.  But, truth be told, Lori whipping out zingers would have felt inappropriate and insincere and I applaud Byrne for not allowing herself to fall into a rut.  She has three films in theaters, right now (this along with X-Men: Apocalypse and Neighbors 2: Sorority Rising), and all three films are different from the others as are all three of her characters.  She’s a very versatile actress and I’m glad to see her so successful.  In this particular film, look for the “You have a friend!” scene.  It’s a rare moment of lightness for her character and is both perfectly timed and executed by Byrne and Sarandon.  It was my favorite scene in the film.

The bottom line is that The Meddler is a charming, sincere, and heartfelt reminder that nothing is more important than family.  I know some people who need to see this movie badly.  I know they won’t.  But maybe someone else who needs to will and they’ll be inspired to pick up a phone, patch up some differences, and get their priorities straight.  Life is short.  Love your family.  And set aside 100 minutes of it for The Meddler, too.