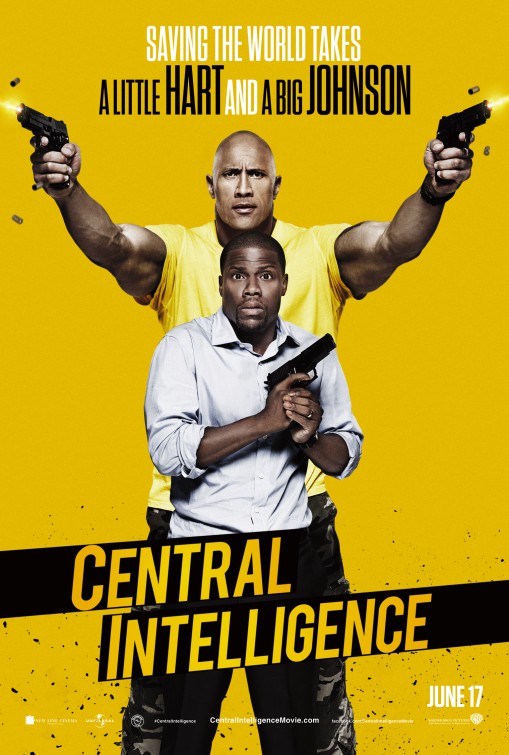 Here’s something about me: I’ve been a huge wrestling fan for the majority of my life.  Along the way, I watched the development of a man who was then (and sometimes is still) known as The Rock.  It wasn’t immediately evident that he was bound for stardom – not in the wrestling industry, much less mainstream Hollywood.  But over time, his natural charisma, delivery, and timing couldn’t be suppressed.  He conquered the world of wrestling and moved on to conquer another.

He’s absolutely become an unqualified success.  Looking at his box office returns, I’m not ready to say he’s “conquered” Hollywood, yet, but he’s definitely making his mark and expanding his profile.  Vehicles like Central Intelligence with true mainstream stars like Kevin Hart are a great way to continue that upward trajectory.  The trailers for this one delivered the laughs and the marketing department did their job well to get me into the theater.  As for the rest, I can say that, in some ways, I didn’t get exactly what I expected, but I wasn’t wholly disappointed, either.

Okay, here’s what most of you want to know: yes, the movie is funny.  It probably isn’t quite as funny as I was hoping – and some of the funniest moments are given away in the trailers and TV spots – but it’s funny, nonetheless.  I found myself constantly amused and entertained and sporadically laughing out loud.  I liked that the film isn’t about jokes but about situational humor and how the characters react to it.  This style seems to work well (for me, at least) and I enjoyed what I saw.

The story wasn’t what I thought it was going to be, but that’s a good thing, too.  I like being surprised and not knowing what’s coming and that was definitely the case, here.  The narrative unfolds organically and believably (enough) and never feels rushed.  In many films, the storytellers seem more concerned about getting to the point than about getting there naturally.  There needs to be a compromise between the two and that compromise is found here.

Where Central Intelligence far surpasses expectations is in its character work.  High school bullying is a central theme and director Rawson Marshall Thurber works well with Dwayne Johnson to highlight the long-lasting aftereffects of that unfortunate trend.  High school (and to a lesser degree college) are our formative years and we all carry those experiences with us into adulthood.  They inform us as people and how we cope with the world around us as we progress through life.  If someone is bullied in school or just treated poorly by the other students, that never really goes away, no matter what the victim might look like on the outside as they age.  Marshall understands this and Johnson gives an unexpectedly layered performance that never loses sight of that reality.

Along those same lines, the film has a surprising level of heart and a great message amidst all of the kookiness and zaniness.  I found myself touched by the time the end credits rolled and that’s a welcome addition to any movie.  The goal of art should be to make the recipient of the art feel something.  And the more feelings the art can elicit, the better.  I laughed.  And I didn’t cry, but I smiled.  I smiled because of jokes and I smiled because the film made me care about the characters and empathize with them.

In that way, the movie actually over-delivers.  And that’s a compliment.  It wasn’t the absolutely hilarious romp that I was looking for, but it was funny enough and made up for the lack of belly laughs in other, arguably more important, areas.  And I think the less-subtle comedy style might actually resonate more with others than with me.  So, this might be the People’s Comedy.  Regardless, Hart and Johnson do what they do and I truly believe that even more people in the industry will be smellin’ what the Rock is cookin’ after this one.

One thought on “45. Central Intelligence”