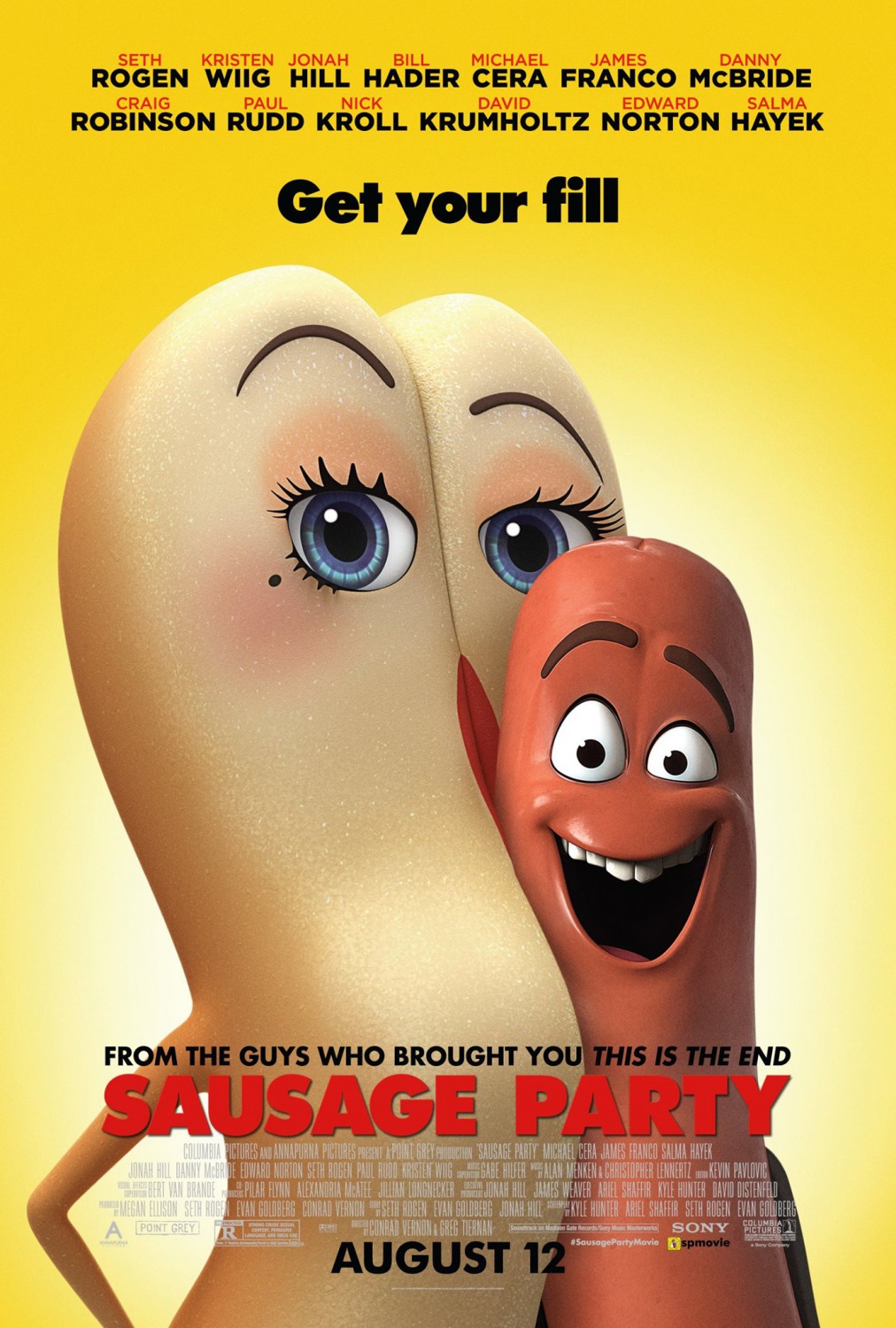 Sausage Party is another great example of the power of intelligent marketing.  Highlighting the unique premise from the minds of Seth Rogen, Jonah Hill, and Evan Goldberg, the trailers and TV spots successfully shined a spotlight on the movie’s assets and shrouded its downsides, playing to audiences’ desire to see something light but also twisted enough to make any typical viewer feel better about the things that go through our own heads.  Mission: accomplished.  Sausage Party doubled its budget after one weekend of domestic release and is easily going to be a financial success for Sony.

Artistically, I would categorize it as mostly a success.  I was really hoping that I would really love Sausage Party and maybe even consider it one of my favorites of the year.  Though my feelings towards it don’t approach that level of enthusiasm and I didn’t “love” it, I certainly loved parts of it and liked it quite a bit, all told.

Sausage Party is, of course, a comedy and I found the source of the comedy to be an interesting thing.  When the dialogue aims to be funny, it does so by dropping its IQ by about 75 points and just going full-on lowbrow.  Lowbrow doesn’t offend me, but there also needs to be some wit and brain behind it in order to actually be humorous.  Rather, in this area, the movie just relies on heavy cursing, knowing that there’s a large contingent of the audience that will guffaw simply because they hear the f-word.  Cursing isn’t intrinsically funny just as in horror movies, blood isn’t intrinsically scary.  Use all the blue language you desire.  Just give me something clever mixed in with it.

That’s where the film fails.  Where the film succeeds is in its story and its situational humor.  Near the beginning, I thought that the narrative was going to strongly echo the same unnamed animated classic from which The Secret Life of Pets blatantly lifts.  And while there are hints of that, Sausage Party quickly finds its own identity.  Maybe I shouldn’t have been, but I was genuinely surprised when the film eventually evolves into some pretty astute social commentary, revealing itself to have a point, even if the metaphor between the fictional world of the movie and our real world eventually loses its obvious parallels.  Still, for a few minutes there, Sausage Party speaks to all of us and makes some good sense.  From the beginning, the movie goes to unexpected places and I was pleased that I could never really predict where it was heading.

As I mentioned, the situational humor and sight gags are where the film makes up for its lack of wittiness in the dialogue.  Much of it is given away in the marketing in order to get us all to the theater but there is thankfully plenty left to discover upon watching the movie, as well.  There’s a lot of satire and a lot of visual references to other movies and it all lands pretty solidly.  Still, I’ll admit that I didn’t laugh out loud very much, but I was amused and entertained all the way up to the absurd, yet fantastic climax where all double entendres fall away and succumb to one giant single entendre.  It’s what the film has built to and it really delivers on its promises, which is as important as almost anything.

So, while Sausage Party won’t land near my Top Ten of 2016 (and maybe not even my Top Ten Comedies of 2016), it was a fun diversion with a great payoff at the end.  The cursing is there just to appeal to those who won’t (or can’t?) look deep enough to see the underlying themes and humor and while I found its casual use (it’s not even character-specific, so it doesn’t even help to define character) distracting, it will help the movie appeal to a wider audience.  Don’t expect a lot of great one-liners that you’ll be telling all of your over-18 friends about, but do expect some wacky visuals and a relatively thoughtful story.  And an ending you won’t be able to scrub from your brain.  Ever.