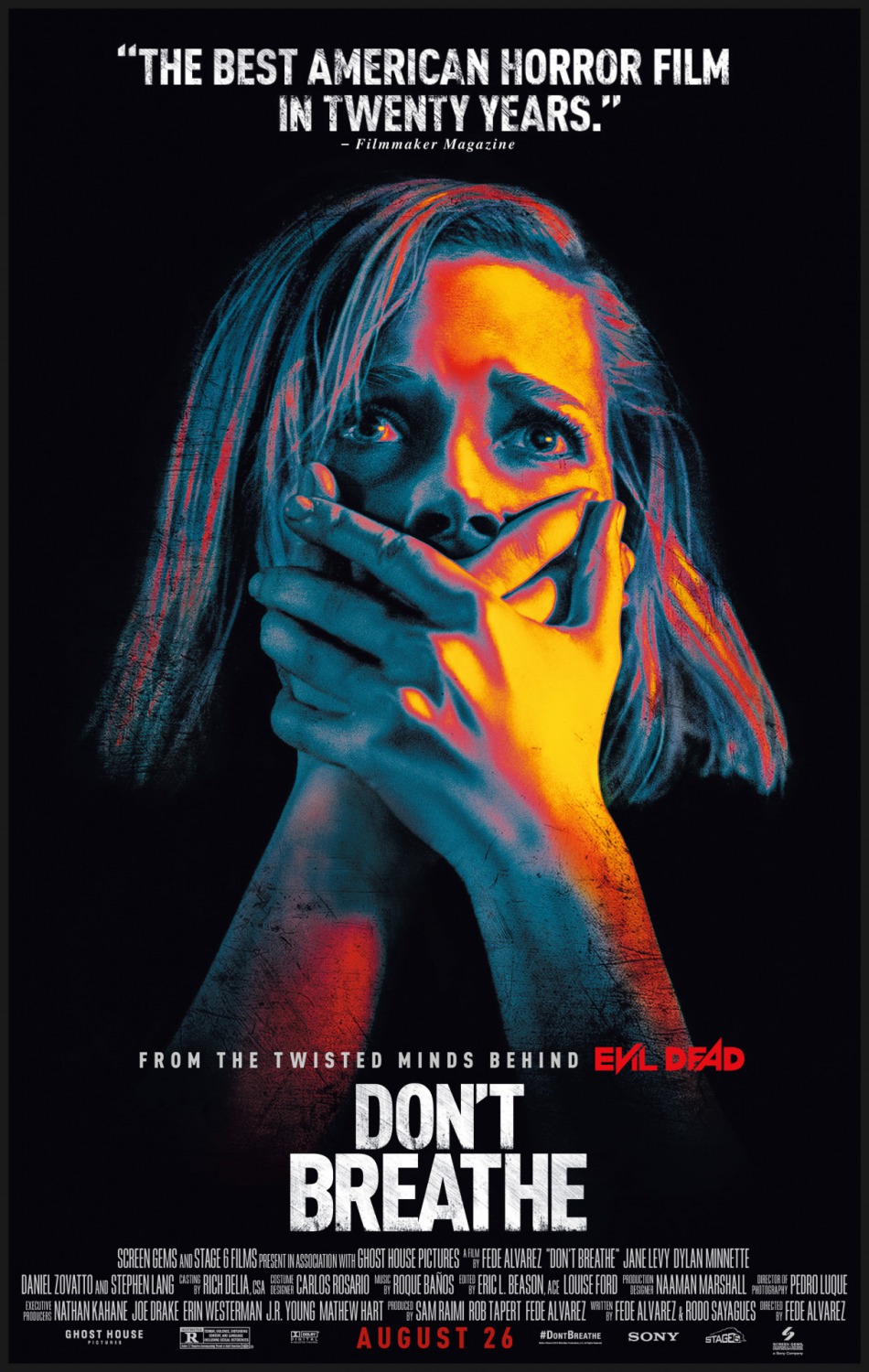 Whew!  I almost got through this block of ten movies without seeing any horror films!  I’m glad I kept the streak up and I was pretty excited to see Don’t Breathe.  Rolling into theaters following an excellent marketing campaign and a lot of hype, Don’t Breathe features a truly original concept (have you read my thoughts on original films?) for the horror genre, which is pretty tough to achieve.  It seems like everything has been done but of course, something fresh eventually comes along and turns the genre on its head.

Don’t Breathe follows the efforts of a group of friends who have come to the point in their lives where they have justified becoming burglars.  Rocky, Alex, and Money (Jane Levy, Dylan Minnette, and Daniel Zovatto, respectively) reason that they can make better lives for themselves by committing burglaries and a blind, elderly war veteran seems like the perfect target.  Ironically, looks can be deceiving.

I admittedly had a bit of a rough time getting into Don’t Breathe.  Now, that could have been because of the four people in front of me.  They somehow managed to be unrelentingly distracting without being overtly obnoxious, which is a new one for me.  One of them acted like every single choice the characters made was a stupid choice, even when they had no other options.  Seriously, if someone had just had both of their legs hacked off in this movie, she would have been all, “Stupid!  Run!  Why don’t you run?!”

But beyond that and directly related to the film, the supposed protagonists are, themselves, criminals, as well.  And my house was broken into and burgled, a couple of years ago, so it’s difficult for me to identify or sympathize with this group of people.  When that sort of thing happens to you, it never really goes away.  To this very day, that event is still costing me both money and peace of mind.

Director and co-writer Fede Alvarez realizes this will be an issue, however, and puts effort into making Rocky and Alex at least somewhat complex and redeemable.  Money, however, is designed to be hated.  For one, he calls himself “Money”.  Also (in reference to Rocky while speaking to Alex), his idea of a romantic line is, “That’s my b**** in there; of course I give a f***!”  Ladies, I’ll wait right here while you swoon, swoon away.

In full disclosure, there were some moments in the first act when I joined my fellow moviegoer in front of me in questioning why our leads weren’t making some obvious decisions that would likely get themselves out of their predicament.  However, when I took a moment and followed my own advice regarding putting myself in their situation, I could accept that decisions in high pressure situations aren’t always made with the brain.  And then, later in the film, they do the things I was waiting for them to do, earlier, so I felt a little better about that as the film progressed.  I can also see how the concept could be a little tough to introduce but has such great ideas for after it gets rolling that Alvarez and his co-writer Rodo Sayagues might have been willing to ask the audience for a little suspension of disbelief early on in exchange for huge rewards, later.

And happily, as it progressed, I absolutely found myself becoming engaged.  By thirty or forty minutes in, I was fully engrossed in what was playing out on-screen and found myself just sitting back and enjoying the ride.  The premise is taken to some clever places.  It’s also taken to some surprisingly dark and twisted places.  Yet, while it’s rated R, the line is never crossed into overkill territory.  There’s enough violence and blood to get the point across and to have an impact but we aren’t talking Hostel, here.  The effectiveness of Don’t Breathe is far more rooted in suspense, tension, and surprise than gore and disturbing visuals.

Stephen Lang deserves a mention for his portrayal of the nameless blind man.  I was convinced enough by his performance that, if I saw him coming towards me on the sidewalk in broad daylight, I might just cross the street.  But in addition to the obvious fear-inducing menace, he also infuses the part with heartbreak and pathos.  The blind man is a truly reprehensible person.  But he feels entirely justified in his actions.

When it comes down to it, Don’t Breathe centers on some pretty awful people, but the ones that matter the most are complex enough to be believable.  And the fact that I was victimized by people much like them not too long ago and still found myself invested in their plight is a true testament to the writing and performances in Don’t Breathe.  Once the inciting incident occurs, the film blasts off and becomes one pulse-pounding event after another, with some fun surprises along the way.  Throughout the action, the principles continue to be developed by their choices and how they respond to each twist and turn so that, by the end, it’s really clear who these people are.  But the film is so intense and exciting, everything else almost goes by unnoticed until the credits roll and one has time to reflect.  After a bit of a slow start, Don’t Breathe rapidly evolves into a blazing, thrilling, guttural, and original experience that will, appropriately enough, leave you breathless.