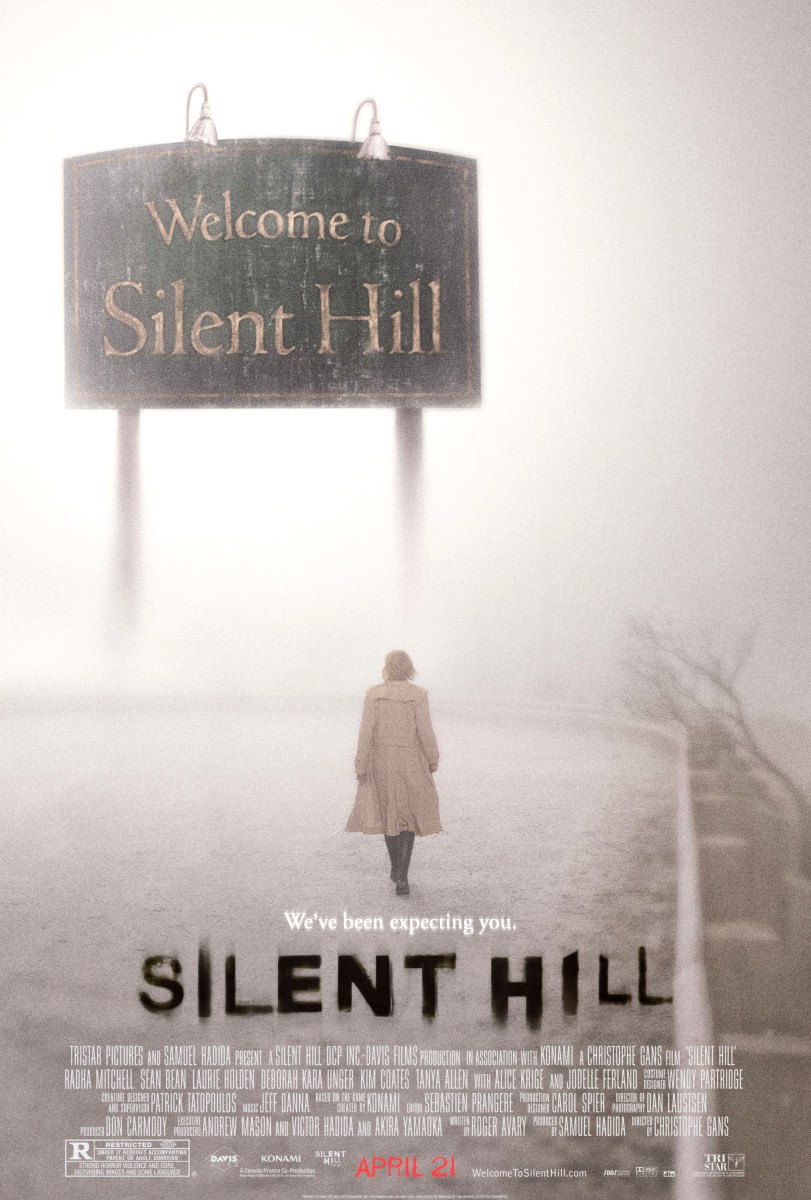 Silent Hill holds a special place in my heart.  For one, the early installments in the video game series really captured my imagination and I remember them fondly.  “Silent Hill 2” is still one of my five favorite video games of all-time (I played through it five or six times) and I always thought the series excelled in both gameplay and storytelling.  And frights!  I rushed to GameStop to pick the game up on release day, but I wasn’t able to get it until early evening.  I settled in to play and was so creeped out and unsettled within twenty minutes that I had to turn the game off and wait until the next day to play.  And I was in the . . . what?. . . seventh? . . . eighth grade?  Okay.  Okay, no, I was in grad school.  “Silent Hill 2” scored an early victory.

I, along with many others, always thought that “Silent Hill 2” would have made the best movie adaptation out of the entire game series.  It was an easy-to-follow, standalone story with a personal, relatable bent as well as a gut-wrenching twist near the end.  It was perfect for a mass audience.  So, I was surprised when it became clear that the movie was actually going to be based strongly on the original game.

That wasn’t necessarily a bad thing.  The original game had a strong story, too.  It was just supremely complex and . . . video-gamey? . . . when compared to its sequel.  Nonetheless, the more I saw from the marketing, the more excited I got.  It all really looked and felt like the Silent Hill that I knew and loved and my hopes were (probably unfairly) high when I sat down on opening night over ten years ago.

Those hopes were not dashed, as unfairly high as they were.  Silent Hill is unfortunately overlooked in discussions regarding both great horror films and great video game adaptations but, I have to say, after a fresh viewing, it holds up as one of my favorites in the former category and probably my very favorite in the latter.

The narrative, as I mentioned, is fairly intricate for what many would dismiss as “a video game movie”.  It’s not as deep as the game (which had more time to tell its story) but there are a lot of moving parts and each serve a purpose.  Not everything is spelled out for the audience, either, as often the puzzle pieces are provided but the viewer is asked to assemble them on their own.  I love when a film doesn’t talk down to its audience and director Christophe Gans and writer Roger Avery take every step they can to respect the people that paid money to see their film.

That goes for both fanatics of the game series as well as the uninitiated moviegoers who are just looking for some fun horror.  Silent Hill is a perfect example of how to stay true enough to original source material that longtime fans are satisfied while also providing a complete experience for those with no previous knowledge.  The Silent Hill series always had such great storytelling, though, that very few changes were necessary to allow viewers new to the property to feel included.  In fact, I could make a case that the changes weren’t even for the benefit of the new people and were instead for the purposes of relatability and efficient storytelling.

The sole major alteration in the adaptation process occurred when the protagonist was changed from Harry Mason in the game to Radha Mitchell’s Rose Da Silva for the film.  Not only did the name change but also, obviously, the gender.  In fact, nearly the entire cast – and certainly all of the principles – of the film are women.  The hero, the authority figure, the expository side character, the emotional core, the empathetic character, the villainous cult leader, and the primary villain are all female.  And not once did any of them have a romantically-focused conversation about a guy.  The only men of note are Rose’s husband Christopher (Sean Bean), who is arguably unnecessary, and the primary physical force of evil in the film, Pyramid Head.  Even the most memorable creatures (along with Pyramid Head), the nurses, are women.  And this was long before society was demanding this sort of thing from Hollywood.  Women were chosen to carry this film because Gans and company decided it was best and that the film would be just as successful and marketable, if not more so, with them in tow.  Nobody involved with making the movie said, “This was a video game aimed at guys.  Guys don’t want to watch a movie that stars only women.”  Again, the filmmakers respected their audience and trusted their cast to deliver the goods.  In this way, Silent Hill was a leader in the industry for open-minded, non-traditional, progressive gender equality in casting male-targeting genre films.

In addition to that, Silent Hill is just freakin’ cool.  The soundtrack is ported over from the game series and that’s one of my favorite aspects of the movie.  That soundtrack is my favorite video game soundtrack in history and it works perfectly for the film, as well.  It’s moody, atmospheric, and unsettling.  The score really helps to draw the viewer into the world and turn the viewing into a full-blown experience.

The creature designs are also largely lifted straight from the games and I couldn’t have been happier about it.  Pyramid Head is a terror from your worst nightmares.  The nurses are simultaneously alluring and frightening; their scene is my favorite and probably the standout for most viewers.  The other monsters are top-notch, as well, with perhaps only the Coal Babies falling a little short of their intended scare-factor.  That’s a little disappointing, because they’re the first creatures we see, but it’s the only instance in the film where the monsters don’t fully have the desired effect.  Altogether, if you watch this alone at night with the lights off and then try to go to sleep, you’re going to have problems, I assure you.

Going back to the nearly-all-female cast, they carry the load well.  Radha Mitchell really steps up as the brave mother Rose who’s willing to go through and against anything to find her daughter.  Deborah Kara Unger is haunting as Dahlia and young Jodelle Ferland does well in her dual role, serving as the emotional and narrative core of the film.  Only Laurie Holden (who later rose to greater fame as Andrea on “The Walking Dead”), as police officer Cybil Bennett, sticks out as being unsure of herself.  The film in many ways feels like the game in its structure (including Rose solving puzzles, finding mysterious items, making her way across town to various locations, and a crazy boss fight) but Holden is the only one who actually acts like a video game character.  In both her vocal delivery and her posture/mannerisms, she comes across as unnatural and stilted, making it hard to connect with her.  She’s a talented actress so this could have been at the request of Gans in the one ill-fated attempt to replicate the game.  But, regardless of whose fault it is, she unfortunately sticks out in an unfavorable way when compared to the others, especially as a protagonist who should function as an audience surrogate.

The bottom line, though, is that Silent Hill is the video game come to life.  That can often be a bad thing, but these particular Silent Hill video games are historically cinematic in nature and lend themselves to film more naturally than perhaps any other video game series in existence.  Fans of the series should be more than pleased with the movie and so should general horror fans.  The film is pretty handily the best video game adaptation to date and also easily falls within my Top Ten Favorite Horror Films and might even crack the Top Five.  My personal preferences tend to sway me more towards the modern, supernatural horror versus the slasher-based movies of the seventies and eighties, and many are quick to jump on the bandwagon of ridiculing any horror film that isn’t instantly and widely regarded as a classic (said slasher flicks, The Ring, The Conjuring series, Psycho), but any objective horror fanatic would be hard-pressed to qualify Silent Hill as anything but unrelenting, effective, and quality horror.

So go ahead.  Turn out the lights, turn off the phone, and watch this one alone and then go to bed.  Let me know how it goes.  I’ll know if you’re lying.