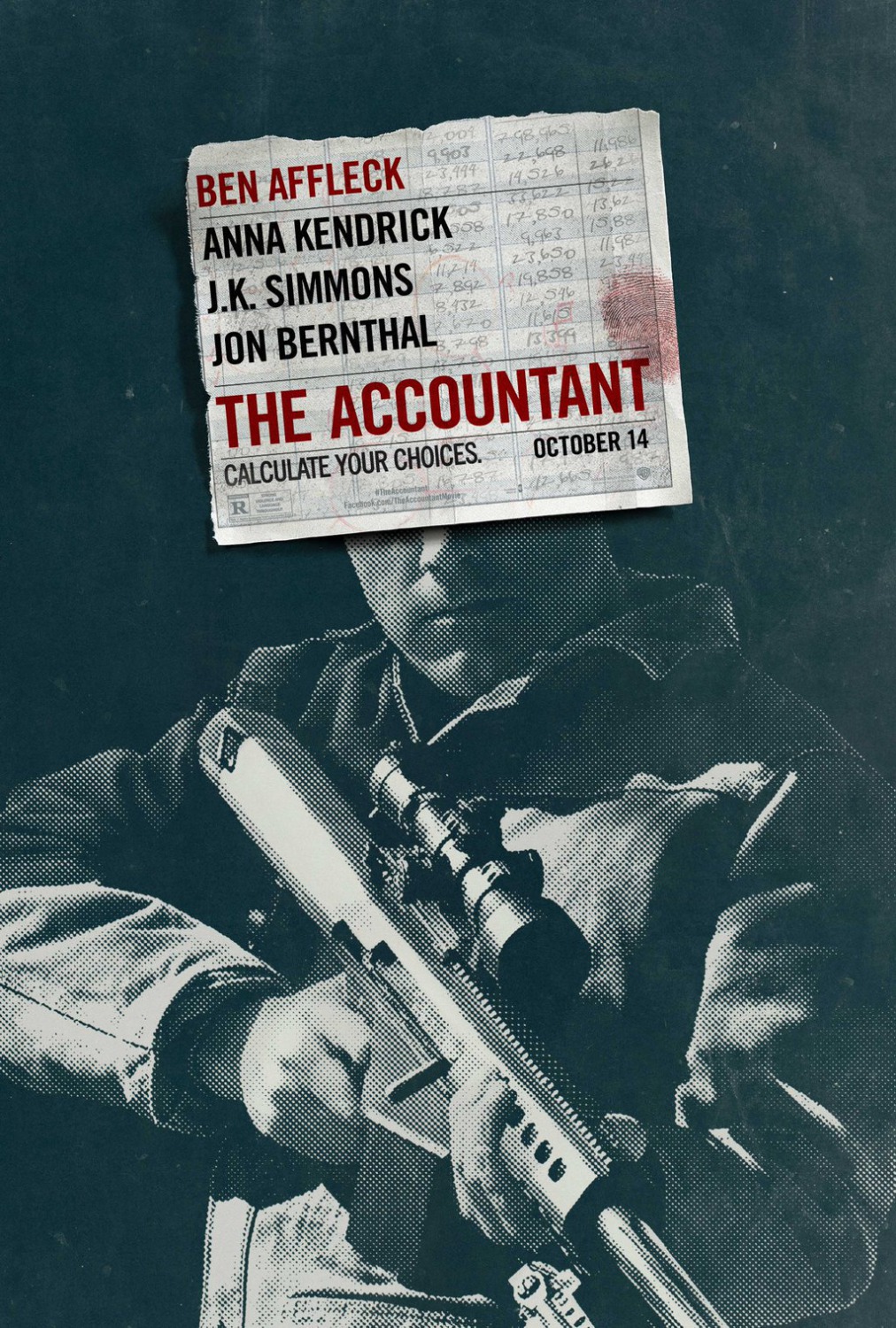 The Accountant is the latest film from director Gavin O’Connor, about an autistic mathematician who gets wrapped up in the shady business of his equally shady clientele.  While O’Connor has been hit (Warrior) and miss (Jane Got A Gun) for me, I can’t say the same for the outstanding cast – maybe the strongest in any film, this year.  Taking the lead is Ben Affleck and he finds himself surrounded by the likes of J.K. Simmons, Anna Kendrick, Jon Bernthal, Jeffrey Tambor, John Lithgow, and Jean Smart.  That’s pedigree right there, folks.

I knew, if nothing else, I’d enjoy that cast.  Affleck is a tremendous talent both on- and off-screen, Simmons gave one of the greatest performances of all-time in Whiplash, Kendrick was rightfully nominated for an Academy Award for Up in the Air, Bernthal is one of the three best performers in the history of “The Walking Dead” (along with Andrew Lincoln and Melissa McBride), Tambor is an ever-reliable character actor, Lithgow has reached legendary status over the years, and Smart has compiled an impressive filmography over the course of the last three-plus decades.  Also, I’m a mathematician, so the film had that in its favor, too.

Beyond that, I wasn’t sure what to expect.  What I got was a solid action thriller that didn’t quite live up to its potential, mostly due an eye-rolling “twist” in the third act.  Leading up to that, The Accountant mostly has a strong sense of identity, narrowing its focus towards telling a compelling and exciting story with believable, sophisticated characters.

Affleck’s Christian Wolff is a well-meaning man who keeps company with people who aren’t quite as well-meaning.  Being as intelligent as he is, he knows what he’s capable of and what his talents can be best used for, and those things aren’t legal.  He needs the money, though, and has complete confidence that he can handle himself.  In his downtime, he relaxes with his Jackson Pollock original painting and his copy of ACTION COMICS #1.  When he finds that other, much more innocent people have gotten mixed up in his dirty business, he sets out to fix the problem.

Nearly the entire film works, and works well.  The narrative is complex and mature.  The characters are strong and intelligent (unless one considers how long it takes Cynthia Addai-Robinson’s Investigator Medina to find the obvious connection between Wolff’s aliases).  The pacing is brisk but even.  Not all of the remarkable cast gets as much screen time as I was hoping, but they’re there to serve the story and they each get at least a moment or two to shine.  For the most part, all is well.  Until it happens.

I’m not going to spoil exactly what it is, but as I mentioned above, there’s an attempted twist that completely fails and nearly derails the film.  It’s a twist that isn’t a twist.  And I say that because this “twist” is frustratingly clichéd and entirely predictable.  Up until that moment, the film is an intelligent, seasoned thriller that asks its viewership to rise up to its level.  And then it feels like O’Connor suddenly wants to pander to a less-discerning general audience that needs a “surprise” in order to spread positive word of mouth about a film.  It’s unnecessary and disappointing.  Making the entire situation even more frustrating is that the film as a whole would have been better served and of an even higher quality than it was shaping up to be had the twist been revealed to the audience near the beginning and then used to help build the tension for a more captivating climax.  I just know that had the twist been confirmed earlier in the picture, the denouement would have had a much stronger sense of urgency and the suspense would have been through the roof as the audience waited for the truth to dawn on the characters.

The good news is that, once the reveal takes place, the way the film handles it is fresh and unexpected.  But by that point, I was so deflated by being hit with such a common Hollywood trope that it wasn’t enough to make up for it.

The Accountant is a very good film that is almost (and could have easily been) a great film.  I hate to punish it so much for one crucial mistake, but it’s a creative choice that completely boggles my mind.  Or at least, the handling of it does.  The film is still worth checking out for everything else (the action, which I’ve failed to mention is intense and riveting, as well) but brace yourself for a “twist” that you will have probably deduced on your own long before the film reaches the end.