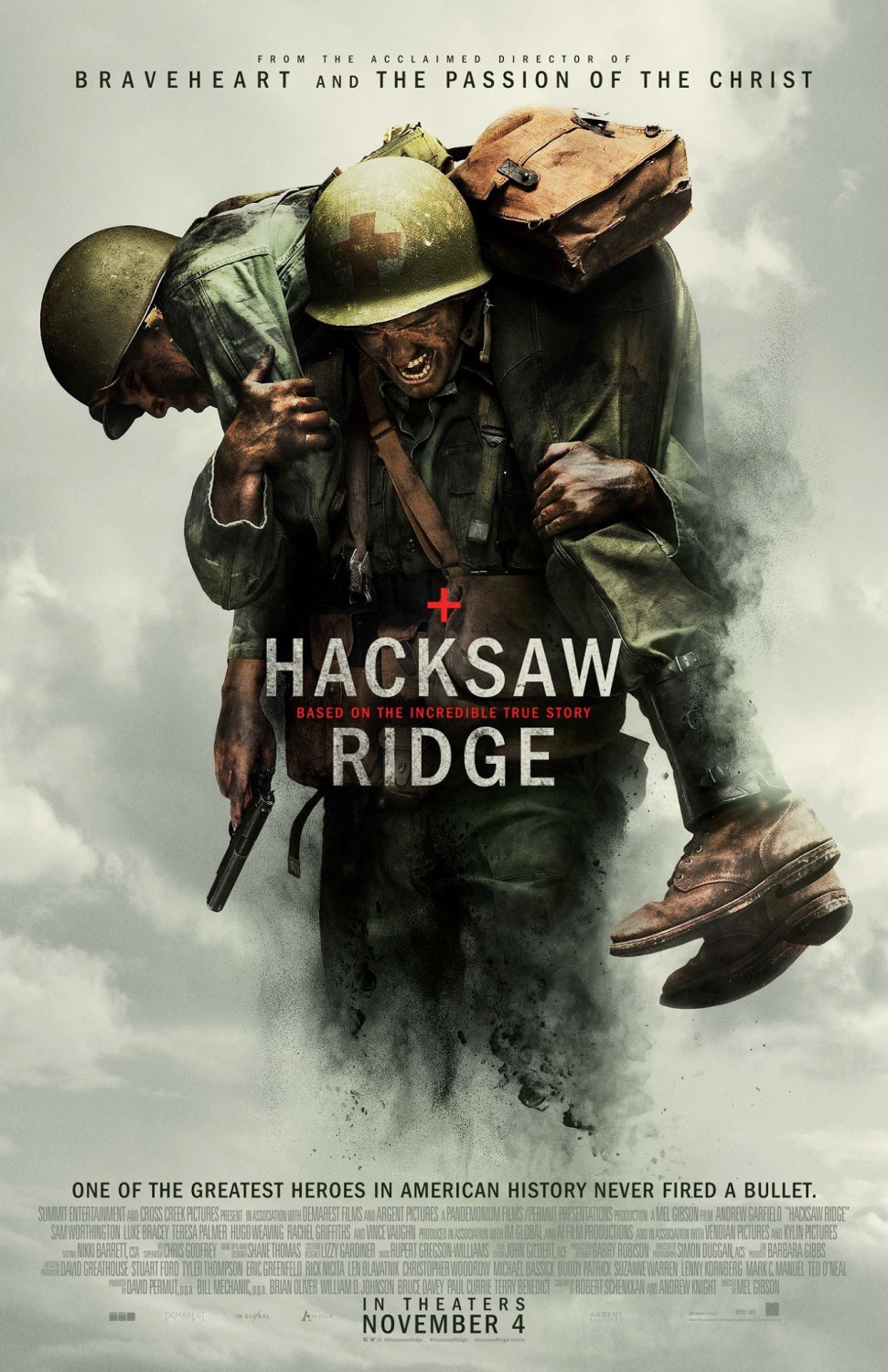 And, just like that, here’s the fourth film on my list of 10 Fourth Quarter 2016 Films to Be Excited About.  This trailer had me at, “Hello,” as its central themes of conflict resolution (especially in war) without violence made it a rare standout in the constant onslaught of war-themed films.  This is also an attempt at a career resurgence by Mel Gibson, who still battles to rehabilitate his image after a very public meltdown that revealed an unbecoming side of himself (to say the least) to the world at large.  I’m not here to talk about that, though.  I’m here for the work.

Hacksaw Ridge is based on the true story of American World War II medic Desmond Doss (played by Andrew Garfield) who, as a pacifist, refuses to pick up a gun and harm other soldiers.  Instead, he contributes to the war effort by healing others and promoting life instead of death.

I often tire of war movies due to repetitive themes and execution, but Hacksaw Ridge is guilty of neither of those trespasses.  Gibson’s film prioritizes character over the glorification of war and death, putting the horror of war on display, rather than the glory.  The best war films – really, the best films, period – put the spotlight on the characters.  Regardless of how well-written, well-structured, or gripping a story is, if the viewer cares nothing about the characters, it’s all wasted.  However, a flat story can survive if it’s supported by engaging, believable characters.  Hacksaw Ridge sits confidently aside the best war films of years past that also focused on the people thrust into the war, rather than the war itself – films like The Deer Hunter and Saving Private Ryan.

Garfield’s Desmond Doss of course takes center stage.  Garfield gives the best performance of his burgeoning career and earnestly conveys the passion Doss feels for his convictions as well as the bewilderment at the idea that any decent person would ask (and often demand) that he betray them.  I can’t speak for anyone else, but I’ve been in that position, many times.  Anyone who has – and has remained true to themselves, despite the external pressure – knows how difficult it can be.  Often there is the great possibility for loss – loss of love, companionship, freedom, or any number of things.  But none of that compares to dignity and self-respect.  One person close to Doss spits at him that he’s fueled by “stubbornness and pride”, showing a complete lack of understanding regarding the fact that true conviction is not a choice; it’s preservation of the soul.  Garfield communicates this with apparent ease, never wavering, never questioning.  I hope he’s remembered come awards season.

The battle scenes themselves are powerful and memorable, feeling uncomfortably real.  And that’s appropriate.  War shouldn’t come across as “cool” or “awesome”.  Was isn’t “cool” or “awesome”.  War is people who don’t know each other and have no personal grudge killing each other because of other people disagreeing.  It’s senseless and needless and scary.  While I find the war scenes “awesome” from a filmmaking perspective, they are horrific from a narrative point of view.  Doss’s reasoning for his pacifism is partially rooted in his Christian faith and the commandment that states “Thou shalt not kill”.  He (correctly) deduces that this isn’t open for interpretation and one can’t live by his God’s rules while also killing in war.  Gibson has also pronounced deep religious beliefs (he directed The Passion of the Christ, after all) and makes a point of getting this idea across.  In today’s political climate, it’s a bold approach that will fly in the face of many who may rush out to see this film.

Speaking of Gibson, I couldn’t help but notice in the film what appears to me to be a parallel to Gibson’s real-life struggles of the last few years.  Desmond’s father Tom (Hugo Weaving, in perhaps the best performance of his career) begins our tale as a drunk who beats his family and then comes to learn from his own son how to be a better man.  It’s an arc of redemption and, while I openly admit that I may be reading too much into it, the subplot gets just enough screen time that I couldn’t help but wonder if Gibson was referencing himself through Weaving’s character, subtly proclaiming that he knows he did bad things, but has learned and is trying to do better.  I don’t know; I’m just speculating.  But it occurred to me and I had to mention it.

The only aspect of the film that felt out of place to me came towards the end, during the final battle.  Without divulging any story elements, at one point, after consistently displaying competency in the field of battle, the Japanese soldiers suddenly become Imperial Stormtroopers, unable to hit anything or anyone at which they aim their weapons.  It’s silly and the complete antithesis of the realism that I was raving about, just a couple of paragraphs ago.  There are always methods that can be employed to achieve filmmaking goals that don’t also involve breaking the rules that have been established for the world of the film.

That aside, Hacksaw Ridge is the best war film to come along in many, many years.  I won’t attempt to suggest to anyone whether or not they should yet forgive Mel Gibson’s personal transgressions, but there’s no question that Gibson is a phenomenal talent behind the camera.  He has an eye for impactful filmmaking, a sense for cultural climate, and a knack for timing.  Hacksaw Ridge tells the right story and provokes the right thoughts at exactly the right time.  The cast is electric, with Garfield and Weaving both reaching new heights of personal performance and the message resonates when the credits roll.  After Clint Eastwood’s American Sniper came along and championed a man who, by his own admission, liked to kill, loved war, spouted hate speech, and was revealed to be an habitual liar – all while glorifying war simultaneously claiming to be an antiwar movie, it’s nice to see Gibson’s film put the story of a true war hero out into the aether, all while demonizing the entire war experience.  It’s my hope that as many people see this honest film as saw the former, misleading one.

Along with Doctor Strange, Hacksaw Ridge is one of two very different – but similarly excellent – films to hit theaters, this weekend.  They both deserve your money.  So, decide what sort of mood you’re in and then just go.