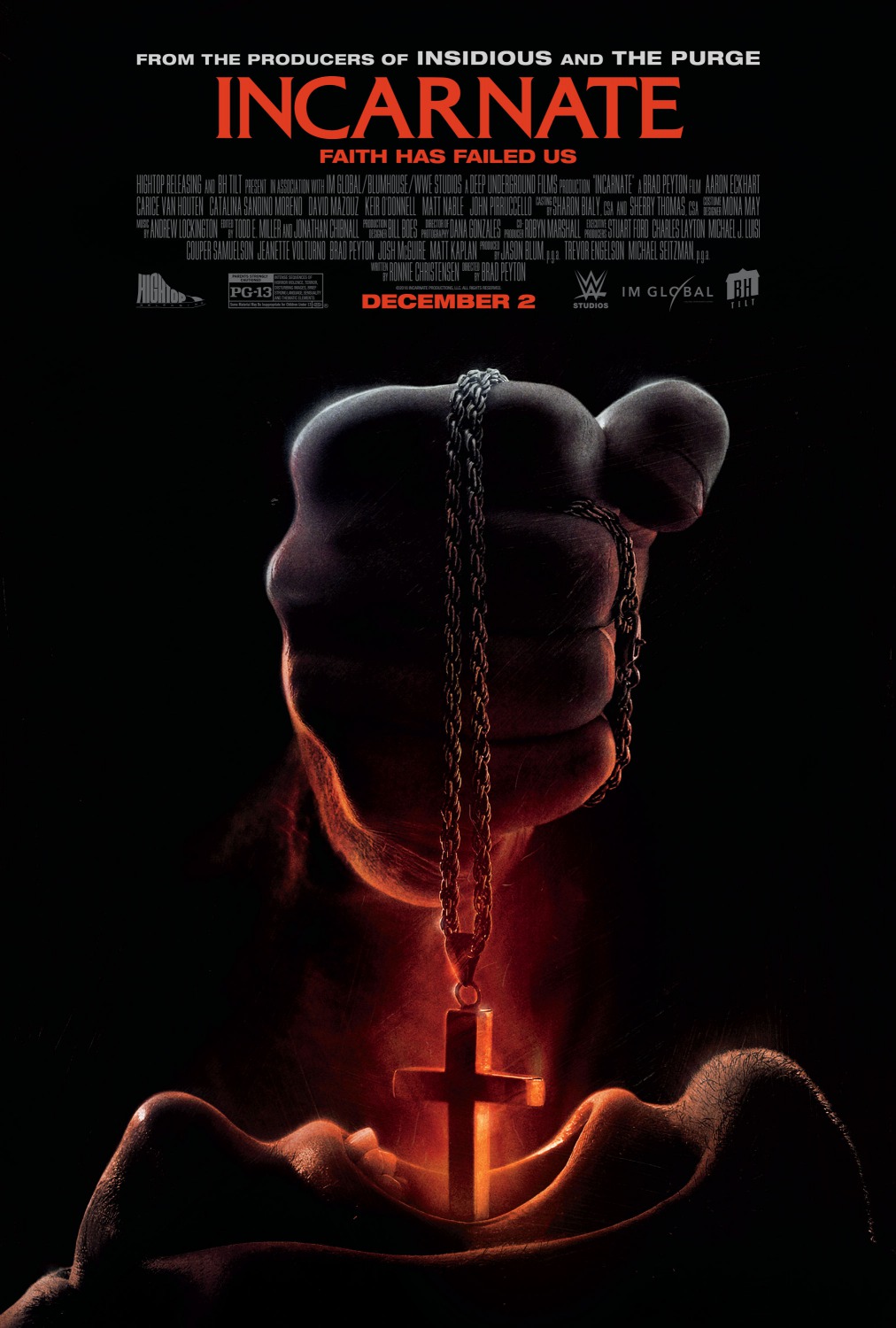 Here we are, with one final horror film in my March to 100.  Incarnate was one that I wasn’t expecting much from.  Director Brad Peyton (San Andreas) is still finding his footing and, though he’s certainly had some hits along the way, star Aaron Eckhart (The Dark Knight, Sully) has lately seemed like one of those actors who will take any offer that comes their way.  That’s purely my own speculation, but I’ll just point to I, Frankenstein and Battle Los Angeles as evidence.  But, Eckhart is still talented, Peyton deserves time to grow, and I love horror.  So, Incarnate it is!

I love being surprised.  And Incarnate surprised me.  Talking much about this one without giving away spoilers will be tough, but I’ll make it work.  The film tells the story of the ironically-surnamed Seth Ember (Eckhart), who travels around the world, helping those possessed by demons.  He doesn’t use traditional methods, however, as he is not a religious man.  Instead, he uses a power that he was born with (that I won’t specify, here) to help them through more scientific methods.

For me, the most surprising aspect of Incarnate is how well-balanced it is.  Peyton and screenwriter Ronnie Christensen put real effort into making the characters accessible and empathetic while keeping the story moving at a brisk pace, always zigging when the audience expects a zag.  The atmosphere of the movie is perfectly executed, as well, making Incarnate a success on every level.

The characters are my favorite component of the film.  They’re complex and imperfect, but relatable and it’s hard not to feel for each of them.  Sometimes, the good people act out of selfishness.  Sometimes, the bad people act out of love.  Everyone who plays a key role is layered, whether they’re a principal that we spend much of the film with or they have only a few minutes of screen time.  Matt Nable gives one of the most powerful performances of the entire movie, and he might spend a total of ten minutes on screen.  Carice van Houten (“Game of Thrones” and I will not make a Milhouse joke) and David Mazouz (“Gotham”) both give strong and moving performances as well.  And, of course, Eckhart delivers, as he always does.  Everyone takes advantage of their time and provides believable, sometimes moving performances in a film where I simply didn’t see it coming.  This depth isn’t quite up to the level of The Ring or the Conjuring series but this is a horror movie; getting anything more than what we see on the surface is icing and when it’s well-executed to any degree, it’s especially delicious icing.

There is no time in Incarnate to become restless.  The pace is crisp and every scene provides new information, new developments, and/or new revelations that propel the story onwards.  Right out of the gate, we are thrown into the middle of Ember’s story.  We know that he has suffered terribly and we know that he has very compelling and personal motivations behind what he does.  His history and the insight into his character is revealed bit by bit as the movie plays out.  What this accomplishes is giving the audience a hook within the first few minutes of the film.  We immediately have unresolved story elements which makes it easy to become, and then remain, invested in the picture, whether or not supernatural events are occurring at any given moment.  It’s a simple, but tried-and-true approach to storytelling that simply works.  No need to reinvent the wheel if it’s still efficiently getting you to your destination.

Along the way, the film keeps the audience guessing, even when it’s not readily apparent that there’s anything to guess.  It’s a lot of fun to suddenly realize that things aren’t as they seem when you didn’t realize to begin with that there was anything that needed to be “figured out”.  There are a couple of instances of foreshadowing that predictably bear themselves out, but even if you pick up on those, there are still other fun surprises along the way.

When it comes down to it, Incarnate is a fresh, fun take on a possession film, of which there have been many before and there will be many more, in the future.  It’s a little bit The Matrix (in concept, not philosophy), a little bit Nightmare on Elm Street, and a healthy dose of the aforementioned Conjuring films.  But it all combines into something that feels new and original, which is harder and harder to do in the horror genre.  Sadly, I had the theater all to myself when I saw this one.  That makes for a pleasant viewing experience but doesn’t bode well for the film’s chances at the box office.  I blame the nearly invisible marketing.  And, what little marketing there was sold it as a generic possession film, quickly glossing over any of the film’s unique offerings to the subgenre.  It’s a shame.  If you’re into horror, at all, I suggest you hurry out and catch this one before it’s gone.