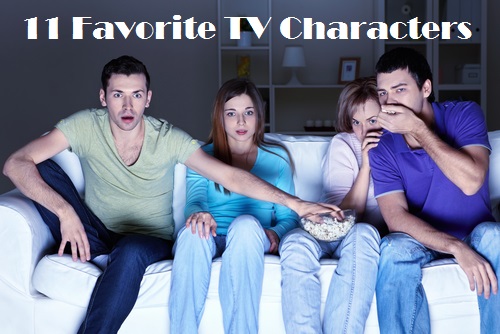 Okay, I know.  This isn’t a post about movies!  Well, you’re right.  But television programming and presentation has advanced so far in the last decade, or so, that much of it is cinematic in nature.  Also, it’s my site and I can do what I want.

So, these are my Eleven Favorite Television Characters of all-time.  As always, there are a couple of rules for this list.

Glenn wasn’t supposed to be a survivor in the zombie apocalypse.  He was a pizza delivery boy.  A geek.  A dateless wonder who never saw the inside of a gym.  Glenn represents the underdog.  But, better than that, he represents the underdog made good.  Glenn finds his true self and unearths the strength necessary to bring it to the surface and then to live it.  He becomes strong – a fighter.  He gets the girl.  He somehow fulfills his dreams in the middle of the worst world imaginable.  Glenn represents hope.  Glenn represents perseverance.  And Glenn reminds us all that we’re capable of achieving our own dreams and being the best version of ourselves, as long as we stop making excuses and don’t allow ourselves to settle for less.  (Other “Walking Dead” favorites: Rick Grimes, Dale Horvath, Shane Walsh, Maggie Greene, Carol Peletier) 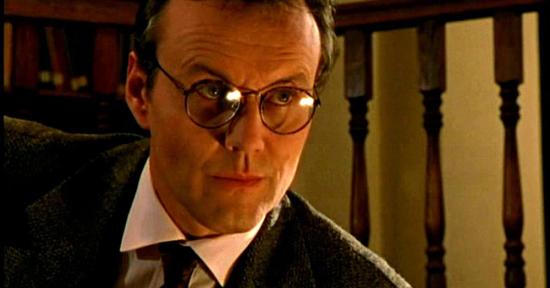 Giles was the librarian at Sunnydale High School, where Buffy Summers got her education.  But he was so much more.  Having been revealed as Buffy’s watcher, Giles took on a protective role over not only Buffy, but her entire gang of “Scoobies” (friends).  Every action he took was in Buffy’s (and humanity’s) best interest and he had a pure, fatherly love for her that served as the backbone for the show.  Entirely selfless, Giles stuck beside Buffy through thick and thin, always knowing what was best for her and never failing to act on it, even when it was difficult.  There are many adults out there that could learn something from Giles, as he served as a different type of role model – especially for a genre show.  Also, dude could sing.  (Other “Buffy the Vampire Slayer” favorites: Buffy Summers, Xander Harris)

Tatiana Maslany is doing the best acting work on the planet – movie, television, or otherwise – on BBC America’s “Orphan Black”.  She recently finally took home an Emmy for her work, in which she plays a group of clones, each with their own distinct look and personality.  Of those, my favorite is science geek Cosima.  Cosima stands out due to the powerful trifecta of her unique look, her superior intellect, and her unrivaled heart.  Cosima doesn’t know how to do anything halfway and she’s often brought to her knees by following her heart over her brain.  But her capacity for love and for giving and her complete lack of hesitancy in doing both is what makes her so endearing and what ultimately lands her on this list.  (Other “Orphan Black” favorites: Helena, Alison Hendrix, Donnie Hendrix)

Could I be any more like Chandler?!  Though I identify with all of them to some degree, of the characters on this list, Chandler is the one most like me in real life.  Always ready to throw out a one-liner, whether anyone in earshot is going to get it, or not, Chandler mostly spends his time watching TV, eating unhealthy food, and getting rejected by women.  Much like Glenn, he ultimately finds a way to put it all together into a respectable life, but he stays true to himself, the whole time.  Humor is his defense mechanism, and perfect timing and delivery are his weapons.  But, he cares about everyone in his life and the important things matter to him.  Chandler is me, but more successful!  (Other “Friends” favorites: Phoebe Buffay)

George is kind of the complement to Chandler.  George is who we all are, a little bit, on the inside.  He’s the part of us that only sees things from our own selfish perspective.  Entirely driven by his own success and satisfaction, George says and does the things we can’t, but so often wish that we could.  He’s a pretty reprehensible person on the surface, but he’s so relatable that it’s impossible for anyone who’s fully self-aware to dislike him.  We all have that side to us and it’s almost cathartic to see it realized on-screen, so we can live vicariously through George and laugh along as he lives out our inner a-hole in the funniest ways imaginable.  (Other “Seinfeld” favorites: Jerry Seinfeld, Cosmo Kramer, Elaine Benes)

Does a Netflix series count as television?  It’s a gray area, but I’m counting it, because “Jessica Jones” is high-end, pure quality programming at its finest.  This particular entry into the Marvel Cinematic Universe is every bit as good as the very best of the mythology’s films and flat-out better than those that don’t sit at the top of the heap.  A huge reason for that is Krysten Ritter’s eponymous character, a smack-talking, hard-living detective that doesn’t take crap from anybody.  With a sharp mind and an equally-sharp tongue, Jessica talks her way through most situations and punches her way out of the few where talking doesn’t work.  She’s been through some unimaginable challenges in her life, but she emerges from each one unbroken and more powerful than she was previously, and ready for the next.  Jessica Jones will beat your @ss and she’ll make you laugh while she does it.  (Other “Jessica Jones” favorites: Patsy Walker, Kilgrave)

Locke was always right.  That’s what it all boiled down to.  For all of the resentment and mistrust and anger that so many other characters had towards him, they all should have shut up and just listened to everything he had to say.  Living a life on the island that was taken away from him before the crash, Locke had no reason to search for rescue or to help the others.  For him, the island was a gift.  But he tried to help the others (lowercase.  Not the Others.), anyway.  Despite it all, he never grew spiteful or bitter towards his fellow castaways and simply did his best, at all times.  Had others paid closer attention to him, who knows how the story of “Lost” would have gone?  (Other “Lost” favorites: Hugo “Hurley” Reyes, Kate Austen)

There has never been a more determined character in all of television than Fox Mulder.  Never stopping, never giving up, Mulder persists in the hunt for the truth regarding the conspiracy between the United States government and alien beings from another planet.  But really, Mulder was motivated by love – love for his sister.  He wanted the truth, yes, but only because he cared about finding – and hopefully rescuing – his sister who had seemingly been abducted from their bedroom when they were children.  Love is powerful and Fox’s love was powerful enough for him to be a never-ending thorn in the sides of those he deemed responsible for his sister’s disappearance.  The whole time, he somehow managed to keep his wit and sense of humor, conducting his investigations with not only an admirable perseverance but also an endearing charm.  (Other “The X-Files” favorites: Dana Scully, Walter Skinner, John Doggett) 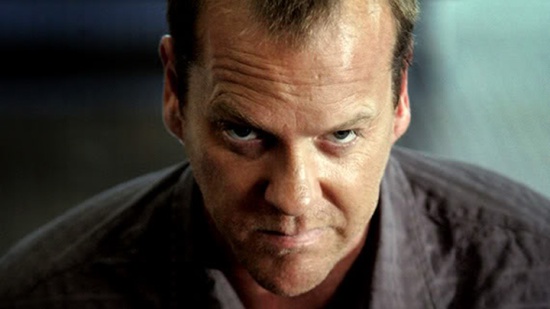 Quite possibly the toughest non-superpowered television character in history, Jack Bauer’s adventures changed television forever, starting with his debut in 2001.  The wild success of the show led to the shift to serialized storytelling on television, which persists so strongly to this day that even “South Park” has jumped on the bandwagon in recent seasons.  But it wouldn’t have worked without Jack.  Jack will do whatever is necessary for the preservation of what’s right.  He knows that his judgement is more informed and backed by more experience than those around him and he cares nothing for protocol.  All that matters to Jack is getting the job done.  And he always gets it done.  (Other “24” favorites: David Palmer, Tony Almeida, Michelle Dessler, Chloe O’Brian, Charles Logan)

I said earlier that I identify with each of the characters on this list to some degree.  Well, that’s not exactly accurate, after all.  I in no way identify with Homer Simpson.  But he has entertained me and made me laugh more often than probably any other character in all of entertainment.  He’s the epitome of the lovable loser, who isn’t actually a loser.  Homer has a wife, three kids, and have you seen the list of jobs he’s had throughout his life?  Yet, through sheer, charming ineptitude, he keeps only the most tenuous of grasps on his whole life.  It always feels like it could all slip away at any moment.  But we know it won’t.  That’s not this show.  So we continue to watch and laugh as Homer satirically mocks the absurdities that permeate our real world and we each shake our head as we say to ourselves, “I’m glad he’s not making fun of me!”  (Other “The Simpsons” favorites: Ralph Wiggum, John Frink, Maggie Simpson) 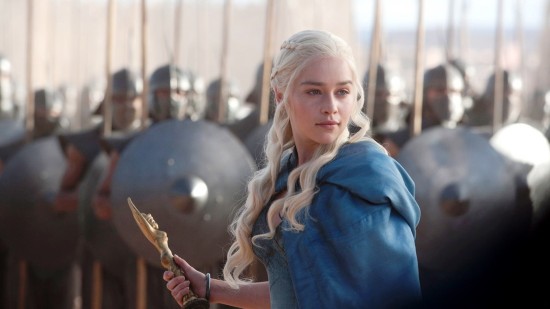 Okay, yes, you probably know by now that Emilia Clarke is my celebrity crush.  And, if I wanted that to be the extent of my justification for Daenerys sitting atop this list (as she will sit atop the Iron Throne), then that’s all I would need.  But I became an Emilia Clarke fan because of Daenerys, not the other way around.  Daenerys is probably single-handedly responsible for three or four of my favorite TV moments in history.  She takes what Glenn accomplished in “The Walking Dead” and exceeds it by leaps and bounds.  Daenerys doesn’t simply live up to her potential.  That’s not good enough for her.  She far surpasses it, becoming the ultimate overachiever.  Everyone in her life tried to suppress her.  They wanted to hold her down and make her subservient.  But she respects herself too much.  And she knows she has more to offer the world than that.  So, she destroyed those people and surrounded herself with new people.  And good luck if she comes across you and you happen to be another suppressor of some form.  Because she’ll destroy you, too, and liberate those you marginalized.  Daenerys fights for what’s right and she fights for herself and others.  She doesn’t do it because she wants to.  It isn’t fun for her.  She does it because she has the ability to and if she doesn’t, nobody else will.  She wants to be the leader that everyone deserves.  She wants to be benevolent and fair, but unforgiving against trespassers.  She’s also wise enough to know (and mature enough to admit) that she lacks leadership and political experience, so her cabinet continues to fill with others who can advise her and fill those gaps.  Daenerys is the leader we all wish we could have in real life.  She’s smart, she’s strong, she’s confident, and she doesn’t just talk; she does.  She’s the Mother of Dragons.  She’s the Breaker of Chains.  The Queen of Meereen.  The Unburnt.  The Khaleesi of the Great Grass Sea.  She is Daenerys Stormborn of the House Targaryen and she’s, hands-down, my favorite television character of all time.  (Other “Game of Thrones” favorites: Tyrion Lannister, Jorah Mormont, Oberyn Martell, Ned Stark, Arya Stark)