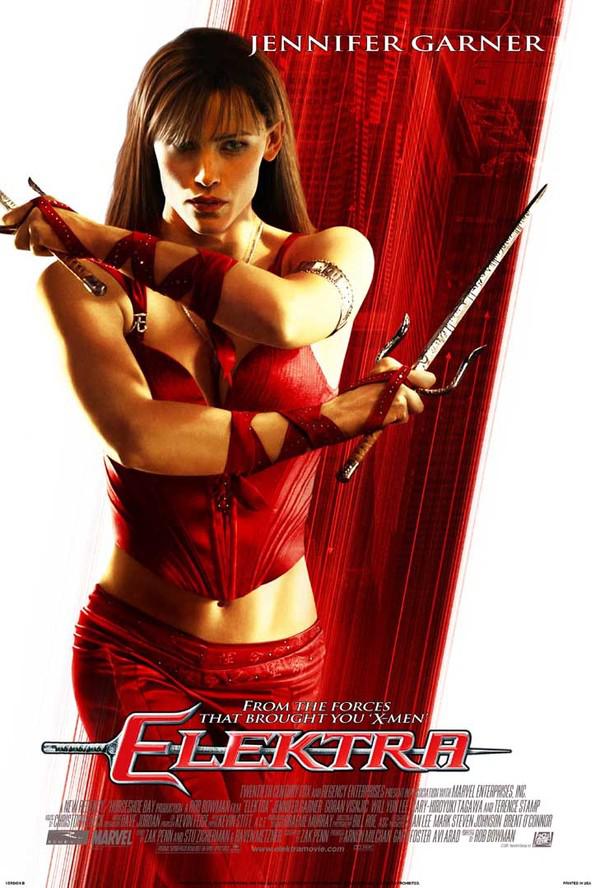 Spinning out of 2003’s Daredevil, Elektra isn’t remembered too fondly.  What often goes unspoken, however, is the fact that it was the first film to feature a female Marvel character as the lead.  But is it really as bad as people say?  I’m a pretty big fan of the character from the comics but – as has been firmly established – comics and movies are two different mediums.  It had been a while since I’d watched this movie, so I was anxious to see it again with some distance and perspective.

The opening sequence is actually a pretty straight adaptation of my favorite single-issue Elektra story.  In this scene, assassin Elektra Natchios (Jennifer Garner) has a bounty, and she’s coming to collect.  It’s simple and pretty effective.  Following these events, the primary narrative gets rolling.  It, too, contains elements of a favorite Elektra story of mine: Elektra & Wolverine: The Redeemer.  Here, Elektra is hired to kill a young girl, Abby (Kirsten Prout) and her father, Mark (Goran Visnjic), but Elektra becomes conflicted after getting to know Abby and discovering the two of them have more than a little in common.

Right from the start, something feels off.  Garner is a talented actor (I, along with many others, loved her in “Alias” as well as many other projects), but she feels miscast as Elektra.  I’ve said many times that changing source material for theatrical adaptations is fine, as long as the original spirit is left intact.  Garner’s performance completely changes the spirit of Elektra.  Elektra is written as an assassin who has left all hope and love behind.  She has seen death and come back from it and has lost all faith in the world.  Elektra is supposedly at ease with her role in the world as a bringer of death and, to her, it’s all just a means to an end.  Yet, after the opening sequence, Elektra betrays feelings of guilt to her right hand man McCabe (played by Colin Cunningham.  You can tell McCabe is a cool cat because he calls Elektra “E”.).  And this was after killing a slew of villainous criminals.

So, that immediately makes it difficult to believe that Elektra is as dark and tortured as we’re supposed to believe.  Add to this that Garner applies a certain softness to her performance, communicating a feeling of depth that Elektra frankly isn’t supposed to have, at this point.  I know it sounds odd to criticize the fact that the titular character in a film has added depth, but that cold, calculated demeanor that is sorely lacking, here, is actually tantamount to the plot.  And Garner’s performance simply doesn’t match what the dialogue is telling the audience.  For example, after befriending Abby and Mark, Elektra is finally sent the names of her next targets, discovering that, naturally, the targets are Abby and Mark.  So, she immediately starts getting ready to do the deed.  She gets dressed, assembles her gun, heads outside, and takes aim.  In this moment, we’re supposed to believe that she’s going to pull that trigger.  But we don’t.  And it’s not only because the preceding story structure tells us that Abby and Mark aren’t dying, anytime soon (though that doesn’t help).  But, more than that, we saw the look in Elektra’s eyes after she killed the criminals, earlier.  She was in pain over it.  Now, we’re supposed to expect her to shoot a little girl?

Even if we don’t buy into the fact that she’s actually going to follow through and shoot Abby and Mark in that specific moment, we need to be able to buy into the idea that she’s capable of it.  And there’s just no reason to believe that.  In fact, there are tangible reasons not to believe it.  I don’t blame Garner for this.  She’s just doing her job to the best of her ability.  She doesn’t give a “bad” performance.  She just doesn’t give the right one.  And that is the fault of director Rob Bowman.  He should have understood all of these things that I’m going on about.  He should have understood that, if killing Abby is giving Elektra pause, it’s because Abby is special, not because Elektra is a hero, deep down, inside.  Abby should be the stimulus that effects change in Elektra, and that change should have be unwanted – resisted by Elektra, the whole way.

I understand that making Elektra more heroic also potentially makes the film and the character more accessible to the general audience.  But it also betrays the legacy of the Elektra and her longtime fans.  There are ways to achieve the former without being guilty of the latter.  Making Elektra redeemable is the easy way out.  I was just complaining about filmmakers taking the easy way out, instead of challenging themselves to reach their goals in a less traditional, but more effective and memorable way.  When Marvel Studios brought Elektra into their Netflix “Daredevil” series, they did just that.  They needed Elektra to be someone that Matt Murdock could fall in love with and view as someone who might be capable of being saved, without actually being that person.  It was tricky but, with the help of an excellent turn by Elodie Yung, they did it.  With Abby and Mark in the film to serve as audience surrogates, Elektra, herself, doesn’t need to be accessible.  And any growing that comes about for her character as a result of her relationship with Abby would then have much more of an impact and make stronger statements about both characters.  Bowman was an inexperienced filmmaker (and he has yet to direct another feature film), but I don’t understand why this isn’t considered Filmmaking 101.

The rest of the film ranges from not-so-good to okay.  The action is fine, if unremarkable.  The dialogue is bland and often unnatural.  The performances are mostly acceptable.  The whole thing just dives so quickly into clichés and safe storytelling that it fails to engage the viewer.  It really would have been much better just to adapt The Redeemer.  Fox had the rights to both Elektra and Wolverine at the time (not so, anymore), Wolverine could have served as the hero of the story with Hugh Jackman as a major draw, and casual audiences could have lost their minds when Elektra beats him in hand-to-hand combat, nearly killing him in the process.  Okay, so maybe that last part would have been fun just for me (it happens in the book, though.  Follow the above link, buy it, and enjoy.), but I think a strict adaptation of that story would have been pretty awesome and a success with audiences.  But it would have needed a different director.  And a different screenwriter (or two).

Elektra is a perfect example of a missed opportunity.  Elektra Natchios is a fantastic character, but this adaptation fails to translate that to the screen for mass consumption.  Instead, we get a run-of-the-mill, by-the-book action movie that sleepwalks through the tropes while providing virtually nothing for audiences to sink their teeth into.  Mediocre, at best, Elektra is a victim of the talent behind the scenes, not in front of the camera, as Fox shows a complete lack of comprehension regarding who Elektra is or what makes her work.  Luckily, we have a new version in the Marvel Cinematic Universe who – while dissimilar from her comic counterpart in key ways – carries the complexity of the strongest MCU characters while also leaning much closer to being a villain than a hero.  If you’re used to modern, post Iron Man comic book films, Elektra will have little to offer you outside of satisfying your curiosity regarding how far the genre has come in the time since its release.