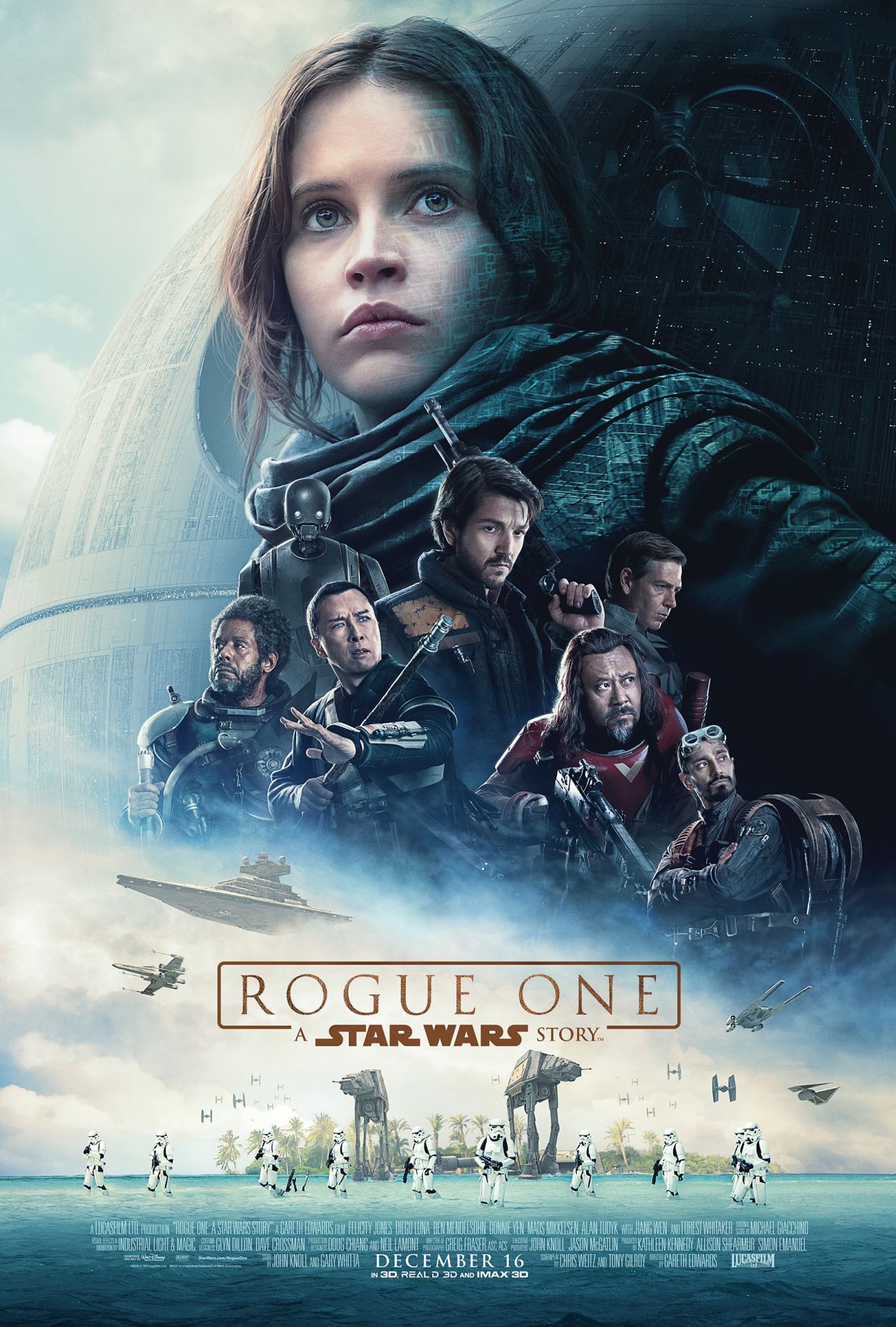 As much as I want to celebrate hitting my goal of 100 movies in one year upon seeing Rogue One: A Star Wars Story, this column isn’t about me.  It’s about Star Wars!  Let me say that I love the idea of stand-alone stories set in the Star Wars universe falling in between the “mythology” films.  Because, really, even the stand-alones contribute to the overall mythology.  I want to see the previously untouched corners of the Star Wars universe.  I want to learn about the heroes that we haven’t heard about, yet.  I want to meet the characters who are operating on the sidelines and down in the trenches – the ones who have an important role to play in this world but aren’t directly associated with any of the “chosen ones”.

Rogue One: A Star Wars Story scratches that itch and provides another piece to the gigantic Star Wars puzzle.  It was easily included in my 10 Fourth Quarter 2016 Films to Be Excited About column and that’s exactly why.  We know the main-eventers.  Who else is out there fighting the good fight?  Well, meet Jyn Erso.

Rogue One takes place between the prequel trilogy of films and the original trilogy.  It follows Erso (Felicity Jones) and her team as they frantically rush to halt the construction of the evil Empire’s planet-killing weapon, the Death Star.

This is clearly not the bright, shiny Star Wars world that we’ve gotten accustomed to in the prequels and Episode VII.  In Rogue One, our feet are firmly planted in the gritty, post-fall-of-the-Jedi world that’s struggling for each and every breath of metaphorical air.  It’s a cynical world and at the forefront of this story is the equally-cynical Jyn Erso.  Erso has no hope for the future.  She’s betrayed at every turn and sees that the world is under tyrannical rule with no easy way out.  So why bother hoping?  False hope is worse than no hope, at all, right?

The film is surprisingly powerful and resonant for a major studio tentpole.  The themes and events as they occur are mature and sophisticated – not unsuitable for kids, but likely to be incomprehensible to them.  We often overlook the weight of the second word in the title of this monumental property, but director Gareth Edwards reminds us that Star Wars is just that – war.  It packs a punch and is an immensely rewarding viewing experience because of it.

Helping out with all of this is the cast of characters and the actors behind them.  Felicity Jones, unsurprisingly, gives the best performance of any – ANY – Star Wars film, yet.  That’s not a knock on anyone else, but rather a massive compliment to Jones.  She knows exactly when to put emotion into her performance, exactly which emotion, and exactly how much intensity with which to inject that performance.  I think when Poe Dameron is fleshed out a little more in future films, Oscar Isaac could challenge her, but, for now, Felicity Jones is the new Gold Standard for acting in the Star Wars universe.

Alan Tudyk’s K-2SO is my new favorite droid in the Star Wars universe and will likely be the breakout character of the film.  He’s not quite Knights of the Old Republic‘s HK-47 (I should lose hope that we’ll see him in a movie, but I just can’t) but he’s as close as we’ve come, yet.  K-2SO is also probably the funniest Star Wars character we’ve seen, so far, but in true Star Wars form, he also has character depth and earns his spot in the film.

The last character I’ll mention specifically is Donnie Yen’s Chirrut Imwe.  He’s not the most original of characters, being a blind martial artist, but – once Chirrut got to do his thing – that didn’t stop me from immediately thinking, “GAH!  He’s . . . so . . . COOL!”  He’s going to be a gigantic, gasp-inducing crowd pleaser.

Ultimately, Rogue One is a story that needed to be told.  Each of these anthology Star Wars films is going to be chosen to either tell a specific story or to feature a specific character.  We know that the next standalone film is the Han Solo prequel starring Alden Ehrenreich, Emilia Clarke, and Donald Glover, and I expect it will be great.  But I think I like this one so much because it fills in important holes in the mythology (including answering a question we’ve had for 39 years . . . well, for those of you who have been alive for 39 years) and introduces us to new characters that form links to older characters.  I’d rather learn about someone new than find out more about Han Solo.  But, whatever.  I’ll see that Han Solo film and they’ll probably blow me away and make me eat my words.  In fact, I’m crossing my fingers that that’s exactly what happens.  Either way, Rogue One tells a story that gives the viewer a greater appreciation for the events of the original trilogy and the franchise as a whole.  How is that not a massive win?

All together, it just works.  There may be little things here or there that one could gripe about, but when a movie is this enjoyable and this impactful, why?  Why would you do that?  Why would you feel the need to look so hard for something to whine about?  This film excels at everything that matters: character, story, dialogue, action, weight, theme, escapism . . . all of it.  So, don’t be a jerk; focus on all of that.  The rest doesn’t matter.  As I was walking out, I overheard someone else saying to the person with them, “You know, when a movie makes you feel that way, that deeply, how can you not call it great?”  Exactly.  Art is supposed to elicit emotion.  Rogue One does that to a degree that I was frankly unprepared for, while also taking the time to entertain me and to make me laugh.

I hope lots of people – especially Felicity Jones – become huge stars after this movie.  And I hope it makes all the money it’s expected to and more.  Rogue One: A Star Wars Story is everything I wanted it to be plus about a half-dozen more things.

And the March to 100 is complete.  Wow.  It’s been a fast year.  But I’m not done!  There are more movies to come, more #ThrowbackThursdays, and more columns – including Best-Of-2016 columns and other looks back at the March.  We’ll see what I come up with.  In the meantime, I would appreciate any help in continuing to expand my audience that you’re willing to give me, and that can start with following the Facebook page and spreading the word to fellow movie-lovers!  Thanks for the support over the last year, and I’ll see you soon!