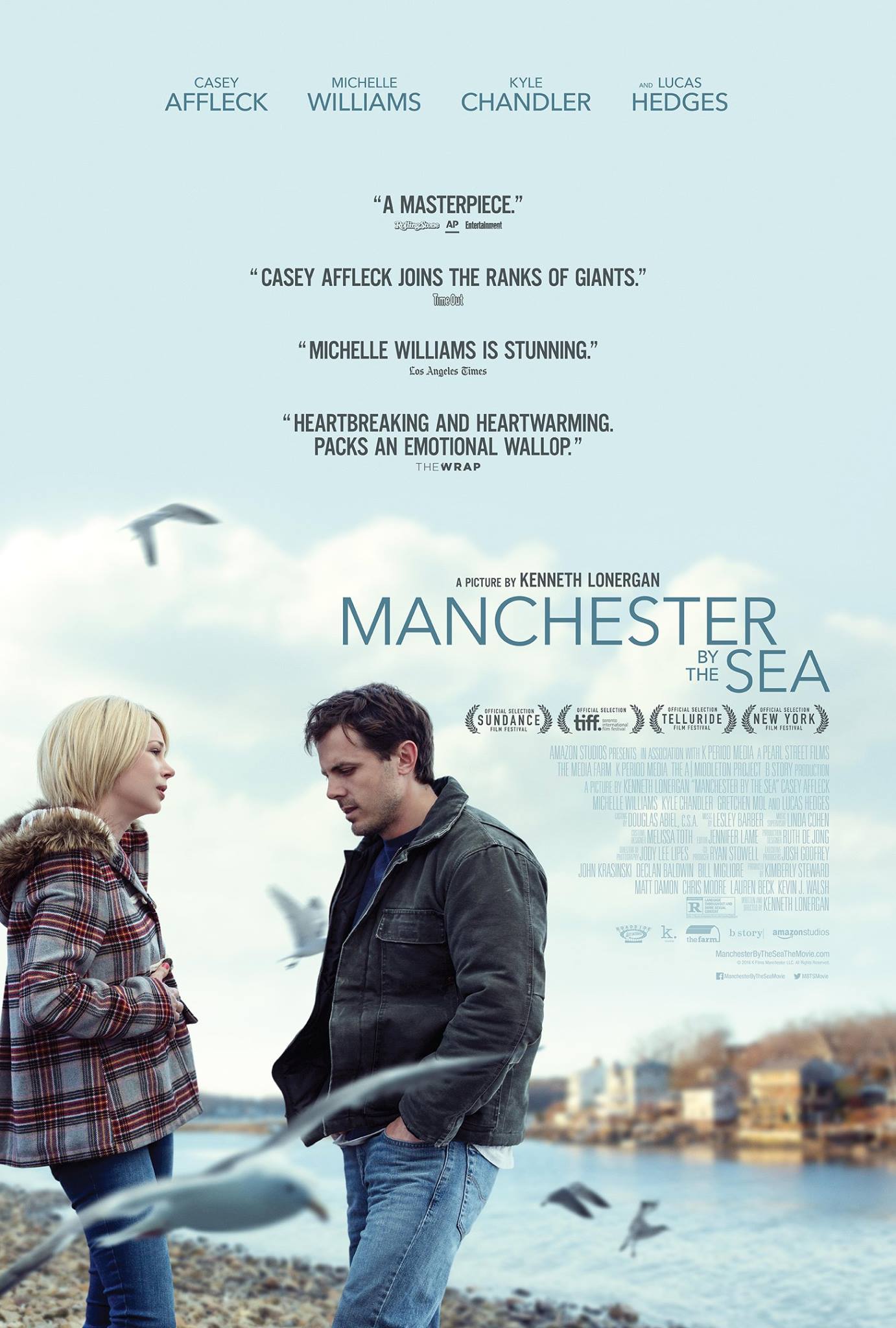 Awards season continues on with Manchester by the Sea, a heartfelt character study about family, loss, and searching for any sort of love in a largely loveless world.  This is the third directorial effort from Kenneth Lonergan (who also wrote the script) and is the highest profile of the three, putting him on the map and in serious contention for some major awards over the next few months.

The film essentially functions as a Casey Affleck vehicle, as he plays Lee Chandler. Lee is a damaged man with a tragic backstory who doesn’t know how to exist on a day-to-day basis.  Barely scraping by in every sense, all he wants is to do his thing and exist.  He’s lost all faith in himself and the world around him and simply doesn’t believe that there’s anything to be found in life beyond just being.  Modern society is a selfish, heartless entity and Lee lacks the proper support or motivation to truly life to its fullest potential.  Suddenly, he’s put in a situation beyond his control where he is required to help another.  But how can he guide someone else – someone very important to him – when he can’t even figure things out for himself?

Affleck gives a subdued, but stirring performance.  He’s the king of repression, bottling everything up until letting out just enough to relieve the pressure.  It’s a grounded, genuine turn and we’re going to be hearing a lot about him through this spring.

Michelle Williams plays Randi, Lee’s ex-wife.  Williams completely won me over in My Week With Marilyn.  She’s the strongest talent involved with Manchester, though her screen time is minimal.  Despite that, she maximizes her opportunity every time she appears and reminds us why she’s one of the best working, today.

The film, as a whole, relies on the performances and relatability of the subject matter to carry it along, as significant events occur relatively sparingly.  Again, the film is about character and people.  Things certainly happen, but the film isn’t about those occurrences but rather the impact they have on our cast.

There’s a scene around the middle of the film that is easily one of the most heartbreaking scenes I’ve ever witnessed in a film.  Just imagining what it would feel like to go through that experience is enough to wreck anyone with a heart.  And that’s where the impact of the film lies: its ability to make the audience to evaluate its own life.

This is a movie site, but it’s also a blog.  And blogs are personal.  And I set this one up to relay my experience as I went to the movies, this year.  Manchester by the Sea had an effect on me.  I’ve been struggling all year with family issues.  And I know everyone says this but these issues are literally the result of something I wasn’t even involved in, yet I’m now the only one still being punished.  It’s three days from Christmas and I’m all but certain that I’m not going to be invited to Christmas dinner and I’ve honestly done nothing to cause it.

If I try to fix it, things will just be worse.  I try to pour my love into other things – movies, TV, comics – because I can’t love most of the people that I want to.  If I try to fix it, I’ll just make it worse.  Manchester by the Sea is making me wonder if I should try, anyway.  Because, just like Lee knows, love doesn’t just go away and we should try to love people, regardless of what it might mean for us.

I don’t know what I’ll do.  I don’t know.  I want my family back but I don’t want to damage anything beyond repair, either.  But Manchester by the Sea resonates with me on a deeply personal level and that’s the hallmark of true art and effective filmmaking.  Congratulations to all involved for putting together such a profoundly emotional, yet understated work.  See you at the Oscars.  It will be much deserved.