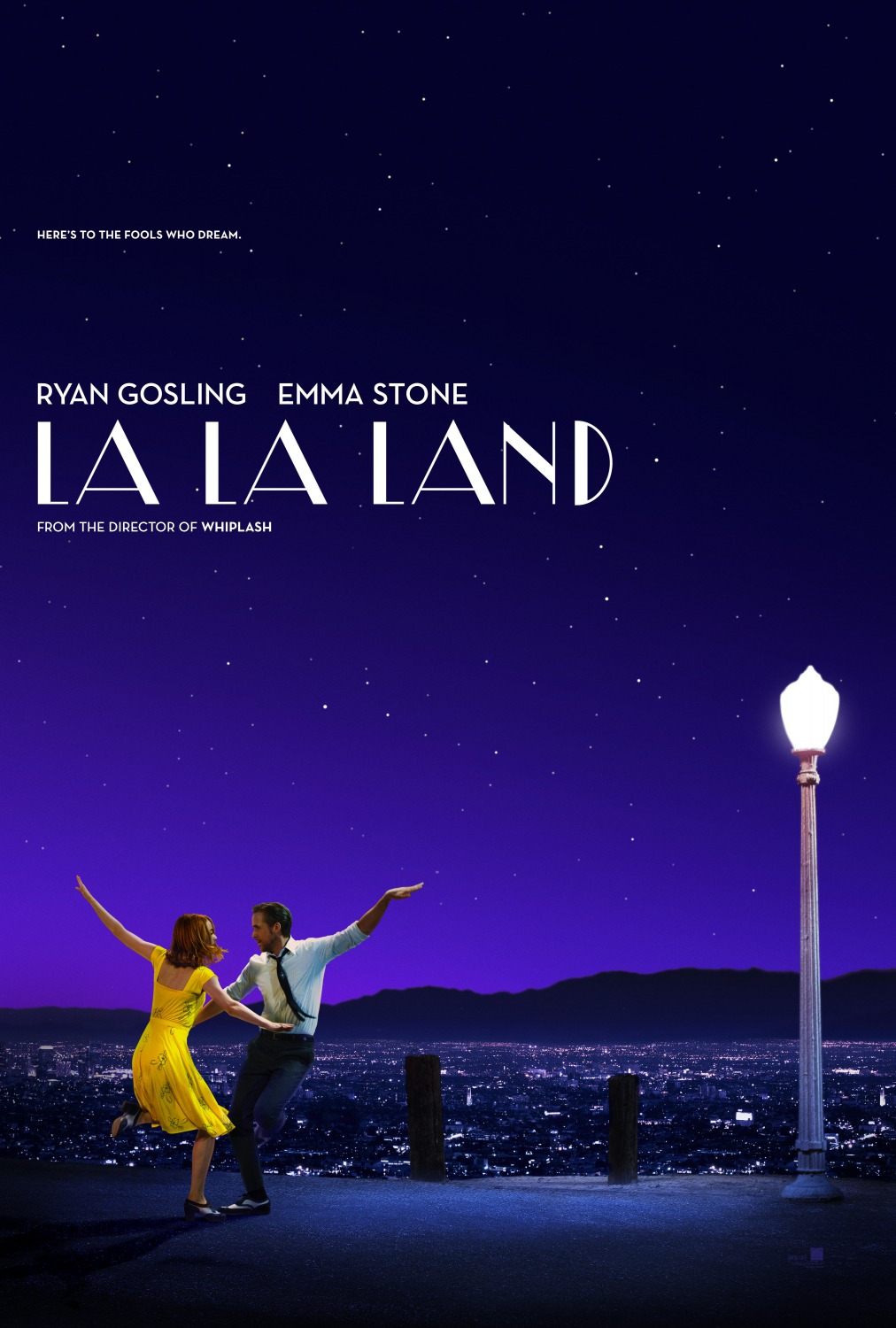 Well, here we are with the final film that made my list of 10 Fourth Quarter 2016 Films to Be Excited About.  There’s certainly been a buzz around La La Land and it seems poised to be one of the two or three awards season darlings of 2016.  Writer/Director Damien Chazelle made a huge splash with 2014’s incredible Whiplash and now he’s back and getting people talking, once again.

Well, this time, he’s getting people talking . . .and singing . . . and dancing . . . and laughing . . . and crying.  And none of that would have been possible without Chazelle’s writing/directing and the brilliant performances of Ryan Gosling and Emma Stone.  They are the heart of the film and they are who most casual moviegoers will be talking about when they leave the theater.  (And there will be a lot of those moviegoers; my screening was nearly sold out.)

The film centers around a couple (Ryan Gosling’s Sebastian and Emma Stone’s Mia) who meet in Hollywood and encourage each other to follow their dreams.  Sebastian wants to open a jazz club while Mia longs to be a world-renowned actress.  The themes of following one’s dreams and believing in oneself are impossible to miss and, while those are hardly uncharted territory for films about Hollywood, what really stands out in La La Land is the execution.

Everything about the film not only works but soars.  The dialogue, the characterization, the music, the singing, the dancing, the story, the directing, the cinematography, the art design and set decoration . . . all of it stuns and dazzles from the opening number to the powerful and poignant finale.  And everywhere you turn there are ideas.  Fresh ones.  Funny ones.  Clever ones. All new ones.  Chazelle understands on the deepest level imaginable how to craft a story and shoot a film for maximum impact.  He plays with the audience and gets the exact reaction he desires, without exception.  It will go unnoticed by casual audiences.  They’ll give the credit to Gosling and Stone.  And while Gosling and Stone deserve untold heaps of praise for their part, it all started with Chazelle and his master plan.

While Chazelle has crafted a film that’s about dreams, he’s also delivered a film that reminds us that life is ultimately about choices, and they aren’t always easy ones.  In fact, the big ones never are.  On one hand, musicals are the least-realistic genre of film in existence, but Chazelle’s story is honest and heartfelt and touching.  It also serves as a love letter to both film and music.  Chazelle teases both art forms about some of their sillier aspects but does it in a playful way that never feels mean-spirited.  All art has something to offer and it’s pretty obvious that Chazelle loves what he’s doing for a living.  And so do I.  After this film and Whiplash, if Chazelle isn’t careful, he’s going to end up as one of my favorite filmmakers.

Let’s talk about Ryan Gosling.  It’s time to be open about the fact that he’s one of the greatest talents in the industry.  His versatility is second-to-none and he simply has a knack for performing.  That includes acting, but is in no way limited to it.  He does so much more than act and, in La La Land, he actually transcends acting and reaches a level of just . . . being.  He truly becomes Sebastian in every way.  Also, I’d like to point out that even though Gosling has never been considered a comedian, his ability to get laughs is pretty much unrivaled.  His timing and delivery are flawless without exception and he provided 2016 with two of its funniest performances in Sebastian and also Holland March from The Nice Guys.  On top of all of that, as Sebastian, he gets to shred the piano the way so many people think they shred the guitar.  Seriously.  He was so good that he made co-star and pop artist John Legend jealous.  Gosling can do anything and the world needs to begin acknowledging it openly.

They already acknowledge that Emma Stone can do anything, and that’s good, because she can.  And her turn in La La Land does nothing to contradict that.  Sweet, charming, and endearing, Stone continues to press all the right buttons with audiences around the globe and, as Mia, Stone will win hearts the world over, once again.

Both of their characters exhibit true passion for their dreams, to the extent that “passion” could actually supersede “following your dreams” as the central theme of the film.  Sebastian talks about jazz from a place of frustration, having to constantly hear laypeople who don’t truly understand jazz speak as if they do and then dismiss it without ever even beginning to understand its depth and finer points.  Just by listening to him, I gained a greater appreciation for it, myself (I never claimed to be knowledgeable about jazz, though, so I would hope he wouldn’t consider me among the lemmings of which he speaks), and I appreciate the character’s enthusiasm in his defense of it.  I feel that same enthusiasm and frustration almost every time I try to talk to people about film, comics, and even professional wrestling, which is misunderstood to an unrivaled degree by people who don’t watch it – and even most people who do.  Seeing Sebastian express his frustration so eloquently and display a true understanding of something that he loves is the defining moment for the character and also the moment where I became invested in his story.

Mia has a similar passion, but it’s harder to boil down to a single moment.  Instead, she suffers a long, extended torturous existence full of pain and rejection, forcing herself to carry on and forge ahead, despite any evidence that her perseverance will ever pay off.  Her entire future is in the hands of others, and therefore the path of least resistance is to simply give up.  After all, this is a story about modern Hollywood and how easy is it in our current culture to actually believe in someone else?  To trust them to care enough about you that they’ll help you to achieve your dreams?  The very word “passion” comes from the Greek word that means “to suffer” and that’s exactly what Mia does, all in an effort to achieve her dream.  But she does it with a smile and an optimism that makes her all the more lovable.

All of this combines into a single experience that at once entertains and moves.  The comedy hits.  The drama hits.  The music hits.  And both stars work together with their director to make a film about love of all different kinds, and the joy and sorrow that that love brings along with it.  La La Land is the absolute pinnacle of filmmaking and deserves every award that will inevitably come its way over the next few months.

Speaking of passions, I started the Movie March to 100 because of my passion for movies.  I love writing about them and I love interacting with other likeminded people.  I’ve gotten a good amount of support and I want to thank any of you who have contributed to that support, whether it was from the beginning or if you just discovered me, last week.  Building an audience is difficult, however, especially when there’s not a lot of money behind the project.  And I don’t have a lot of money to put behind it.  So, it’s been tough and it’s often felt as though I was writing for just a handful of people.  There have been moments of brightness.  And I feel like those who read like what they’re reading.  There just aren’t as many readers as I would hope for.

But I can’t get more if I stop, now, can I?  So, the March will continue into 2017!  There will be a slight re-working.  I’m not shooting for any specific number of movies.  The format will shift, a bit.  But I’m going to keep trying this and see if I can turn it into something.  Any help you can provide would be immensely appreciated.  In the meantime, I have more 2016 movies to see, so those will get added to the count.  2017 films will not have a number attached.  Some fun Year-in-Review columns are in the works and who knows what else?

So, keep following the Facebook page and share it around.  If you know of other online film communities, share it with them!  Get the word out so you can say that you knew me when!  Thanks, everyone!  Don’t go anywhere, it’s just going to get better!