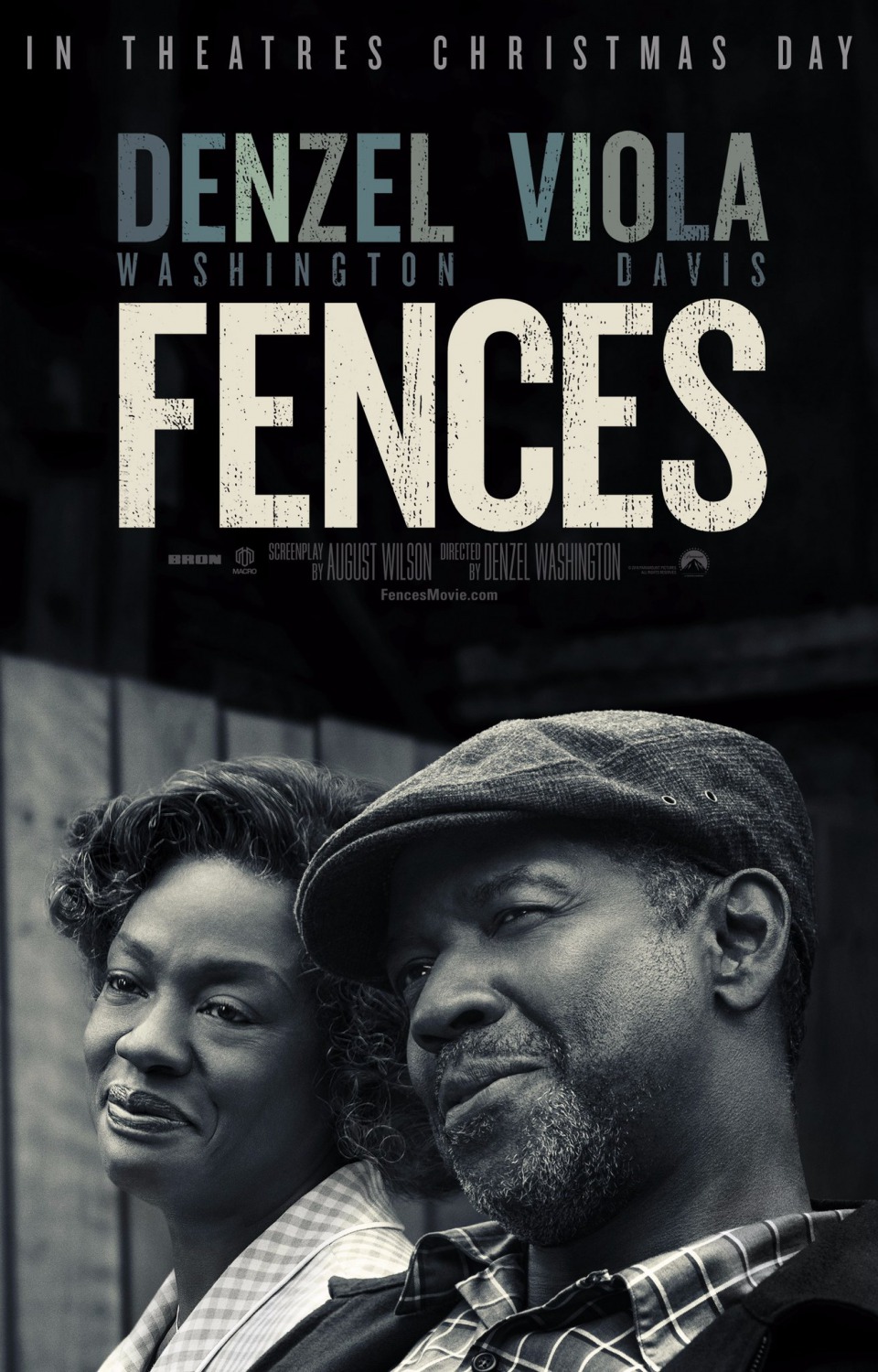 Following the efforts of African-American father Troy Maxson as he attempts to raise his family in 1950s America, Fences is the rare film that not only stars Denzel Washington but which he also helms.  And it’s the most complex film I’ve seen in quite some time.

That complexity is rooted in its honesty and stark realism.  On the surface, the story seems obtusely simple.  But once the characters’ motivations behind their words and actions are explored, the film becomes intricate and layered beyond all expectations.

Troy and his family all feel like real people.  I harp on the importance of that particular component of filmmaking on a regular basis and the entire team behind Fences has mastered it.  The characters are written realistically.  They each repeat their favorite turns of phrase and words.  They laugh uproariously at their own jokes, even though said jokes have been lifted from a thousand other sources.  And they speak like people from the 1950s with their backgrounds, upbringings, and desires would speak.  Their life experiences as well as their hopes for the future are reflected not only in the message of their words, but in their choice of phrasing.

The characters are also portrayed to perfection.  People tried their best to put Viola Davis’s performance as Amanda Waller in Suicide Squad over as something special but she wasn’t actually given anything to do in that woefully underwritten role.  Here, as Troy’s wife Rose, she gets to . . . I was going to say “shine”, but that’s not strong enough.  She radiates.  She’s raw and powerful and a painfully sympathetic figure throughout the entire story.  It would be easy to wonder why Rose is with Troy, at all, but Viola convincingly sells it.

As Troy, Washington gives my favorite male performance of 2016.  He is singlehandedly responsible for the majority of the film’s complexity.  At the outset of the narrative, he comes off as a decent, likable family man.  A little rough around the edges, but basically good.  However, just like in real life, as more time is spent with Troy, the real man underneath becomes more and more exposed and the audience is no longer sure he’s who they thought he was.

The opening scene reminded me very much of the opening to Quentin Tarantino’s Inglourious Basterds.  When I say that, I mean in delivery, not content.  It’s a basic, isolated, 20-minute scene of dialogue that opens the window into the minds of the principles and their relationships.  It’s lighthearted and fairly benign but there’s an unmistakable ominous presence lurking just underneath the surface.

As that unfolds over the course of the film, Troy becomes increasingly transparent, yet no less complex.  He’s a man who feels like society owes him; he’s simultaneously afraid and mistrusting of the world that’s changing and progressing around him; he feels the need to maintain control of his entire universe.  And those traits are the groundwork for how he lives his life.  It’s not a particularly productive combination.  He becomes so concerned with living up to his responsibilities to his family – mostly in an effort to prove to the world that he’s “a real man” – that he loses touch with how to love them.  He lives a life of hypocrisy but never once comprehends the irony of the “do as I say, not as I do” approach to his relationships.

Washington – both as director and actor – navigates the difficulties of this material like the seasoned professional that he has become.  His work in this film is beyond remarkable on every possible level.  He’s incredible to watch and also remember that he pulled similarly exceptional performances from the remaining cast members, as well, including several who are young and inexperienced.  For me, this is the best work of Washington’s career and I hope it’s reflected at the awards ceremonies in the upcoming months.

If there’s one place the film falters, a bit, it’s in the fact that there’s never really a hook – an unresolved plot element that propels the narrative forward as we wait for the denouement.  There’s no rule that says that there has to be one, of course, but it’s always a bit tougher on the viewer if there isn’t.  This is why the film feels so simple on the surface.  But the dialogue and character work are both so unnaturally strong that they more than compensate for the fairly by-the-numbers tale.  It’s all in the execution and the execution is exquisite.

Fences isn’t an easygoing day at the movies, but it’s a showcase for some of the best that the art form has to offer.  Though the film was very good, there were better ones in 2016.  But I challenge anyone to find a male performance from 2016 that tops Denzel Washington as Troy Maxson (if I discover one in the weeks to come, I’ll make it known).  Viola Davis is right up there at the top of her game, as well, with a part that allows her to flex her muscles and put on full display why her name is consistently on the tip of so many tongues that surround the industry.  For film lovers, Fences is a master class of performances and in believable, honest writing.  It deserves your attention.