Ahh, action.  I feel pretty comfortable stating that most people probably go to the movies hoping to see some great action.  Production studios spend billions of dollars a year crafting elaborate action sequences in the hopes of pulling in millions of people and hundreds of millions of dollars.  But, for the purposes of this column, what constitutes an action scene?  Well, I’m considering an action scene to be any scene that relies on anything outside of dialogue to engage and excite audiences.  That includes fight scenes, epic battles, terrifying scenes of horror, extraordinary suspense, sporting events, musical numbers, and even (gasp!) sex scenes!

There may be minor spoilers below, but listen, folks.  The purpose of these columns is to get you to watch these movies and to appreciate the good that they have to offer.  So, why haven’t you seen them, already?  Anyway, what was the best that 2016 had to offer?  It all starts with . . .

The Now You See Me movies have seemingly slipped a little under the radar but in actuality have made an extraordinary amount of money.  This sequel pulled in a worldwide total of just under $335,000,000!  And scenes like this one are part of the reason why.  This attempt at a tech heist by our rascally group of protagonists is completely and totally unlike anything that’s even been done in film, before.  The vision and inventiveness behind it is astounding and it delivers a unique kind of thrill that this particular franchise can claim as its own.  Don’t let this series pass you by.  (Original post.) 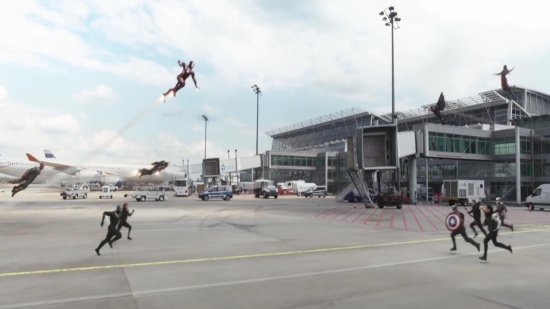 Captain America: Civil War was chock full of geeky goodness and the massive airport battle was the best of it all.  It’s the dream come true of everyone who, as children, would fantasize about seeing the greatest superheroes in comics battle each other, forgetting about the villains for once.  The different pairings and operational strategies that are play in this scene have to be seen to be fully appreciated and the film never forgets that all of this is supposed to be fun, so we get a lot of humor from the likes of Spider-Man and Ant/Giant-Man that feels authentically like the dialogue we’ve been reading in the comics since 1962 (sorry, folks, no Fantastic Four, so I can’t say “1961”).  Sometimes, bigger really is better.  (Original post.)

3. Nancy vs. The Shark (The Shallows)

Quite frankly, The Shallows is one big thrill from beginning to end, but the climactic final battle between Nancy and her persistent adversary is a nail-biting, pulse-pounding, heart-stopping, breath-holding experience like few others.  There are innumerable reasons why this movie rocks and everyone should see it.  But the finale will grab even the most cynical by the spine and force their attention away from their phones and onto the screen.  (Original post.)

This scene.  Holy crap, this scene.  This was it for me.  This was the most terrifying scene I’ve ever witnessed in any film.  Turn off your phones.  Close your laptops.  Put away your tablets.  And for the love of Hitchcock, take out your earbuds.  And, finally, turn off the lights and just let this suck you in.  I’m pretty sure that I stopped breathing during this scene and I may have actually died for a moment.  It’s masterful work by James Wan.  (Original post.)

1. The Trinity vs. Doomsday (Batman v Superman: Dawn of Justice)

You know, for a movie that supposedly sucks, it sure does keep popping up on these lists.  I thought about extending this entry to include the Superman/Batman brawl that precedes it, but this three-on-one battle was just in its own league compared to anything else in movies throughout 2016.  If you want to visit online message boards and Facebook comment sections and pretend that, as a kid,  you always dreamed of seeing these movies get made so that you could hear the characters spout the dialogue you were reading, then go ahead.  But it’s not true.  Scenes like this – WARS like this – are what we always wanted to see with our own eyes on the big screen as if they were really happening.  And Zack Snyder absolutely delivers.  The film as a whole isn’t perfect, and all of the other stuff that doesn’t exactly work matters in the long run.  But this . . . this climax is perfect and – for sheer thrills and excitement – it blew everything else in 2016 away.  (Original post.)

And that’s it!  This was a tough list and there were a few scenes from other films that I cringed at leaving off, but I’m sticking with the top five and these were the best.  If you haven’t checked them out, do it!  And, in the meantime, follow us on Facebook!