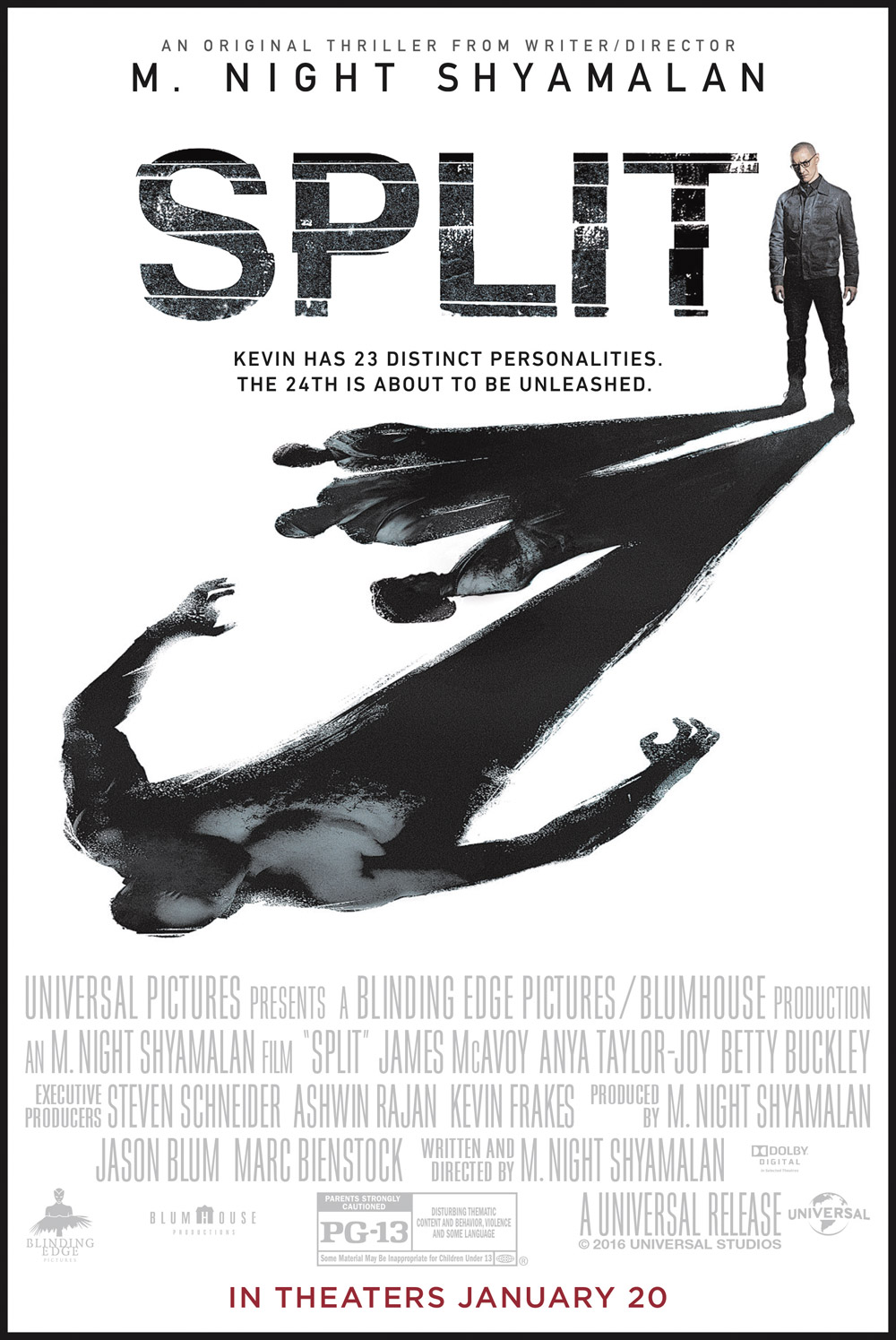 Once upon a time, M. Night Shyamalan was my favorite director.  The Sixth Sense was a work of genius and an instant classic.  Shyamalan’s follow-up to that one wasn’t quite at the same level, but Unbreakable was quality filmmaking.  Signs was tremendous.  Then, things slacked off.  I liked The Village more than most others did.  And I didn’t hate Lady in the Water, but I didn’t love it, either.  It felt like he was truly losing his magic.  And then The Happening was a travesty.  His movies got to a point where each was worse than the last until he released one that simply couldn’t have been much worse.  It damaged his reputation.  Severely.  He resorted to an adaptation – a first for him – with The Last Airbender and then After Earth, neither of which helped his ailing career.

I was glad to see Shyamalan return to form with The Visit in 2015.  It was a great comeback with a fresh premise and unique execution.  I’m a fan of that film, and my hopes were high that the Shyamalan of old had returned.  If nothing else, it’s good to see that he’s getting another chance to prove himself and I hope he learned something from his previous struggles.

The premise of Split – as you may know – is a man named Kevin with severe Dissociative Identity Disorder (James McAvoy) kidnaps three young women, played by Anya Taylor-Joy, Haley Lu Richardson, and Jessica Sula .  That’s it.  Pretty simple.  And, for thrillers, simple is good.  The story unfolds as the girls try to manipulate the kidnapper’s personalities into internal conflict in the hopes of escaping.

Going into Split, I had no real sense of whether or not I should expect to enjoy the film.  I knew that I wasn’t particularly fond of what I was seeing of the childish Hedwig personality; the dialogue didn’t sound the way that a real nine-year-old boy speaks.  On the flip side, Kevin isn’t a nine-year-old boy, so this could just be his interpretation of a nine-year-old.  Either way, it wasn’t as bothersome in the film as it was in the trailers.  The inauthentic moments were few and fleeting.  The reality of the situation is that James McAvoy gives an earth-shaking performance.  I talk a lot about talented actors who are cast in roles that don’t push or challenge them.  Well, this isn’t that.  McAvoy is challenged in a way that I can’t immediately recall seeing before and he far surpasses any reasonable expectations I could have ever possibly mustered.  It’s not just the different voices he uses.  It’s the mannerisms.  The subtle facial tics and expressions.  The delivery.  He felt like different people.  And his Dennis personality is where he shines the most.

I don’t think anyone with an eye for talent has ever accused McAvoy of being anything other than extremely talented, but he’s even better than I gave him credit for.  Any film that gives an opportunity like that to a talent like McAvoy can’t be written off as entirely bad by anyone who hopes to maintain any semblance of credibility.

But he’s not the only one.  Anya Taylor-Joy continues her rise to stardom in her highest-profile role, to date.  This is the fourth movie in which she has starred over the last year.  And “starred” is the right word; she’s had a leading role in all of them.  Also?  Those are the only four movies she’s made.  Pretty impressive.  Equally impressive are her performances in those films (or at least the ones I got to see.  Those being The Witch, Morgan, and now this one.).  Taylor-Joy has a natural charisma that makes her irresistibly watchable and she also possesses the talent to justify it.  In Split, she doesn’t quite have the amount of screen time that McAvoy enjoys, but she earns what she gets.  She simply feels authentic.  She emotes easily and naturally, never overdoing it, but not downplaying it, either.  Here, her character of Casey struggles to put her emotions on the backburner, being wise enough to understand that it’s her brain and not her heart that will (hopefully) get her out of the situation she’s found herself thrust into.  But she’s only human.  The emotions come and they come in spite of her best wishes.  Taylor-Joy strikes this balance with the poise of a seasoned veteran.  She’ll have more eyes on her in this film than in her other three combined and the exposure will hopefully be beneficial.  The subtleties of her work will go unnoticed by most general audiences but not by film lovers and not by those in the industry.

And then there’s Shyamalan.  I read a particularly scathing article regarding this film, after I saw it.  I tend to not read anyone’s detailed thoughts or feelings on a film until after I’ve written my own, but I caught the headline early this morning and it stuck with me.  The headline referred to the film as “desperate” and “disgusting”.  I had to see what they were going on about.

Without getting into details (and without linking to the article, here, because it’s not worth the read), it was yet another entitled movie “fan” who wants to decide for filmmakers of what their stories should be allowed to consist and who their characters are allowed to be.  In an overbearing effort to come across as a champion for imaginary characters who don’t need to be spoken for (and to overuse the buzzword “agency”), people such as this actually dare to stifle free speech and creativity, all while proclaiming themselves to be a so-called “film lover”.

In truth, this is M. Night Shyamalan’s movie and it’s his right to tell the story he wants to tell.  Nobody can speak to his motivations or his decision making except for Shyamalan, himself.  Most critics are enjoying Split.  And so did I, all told.  There is one particular trope in this film that Hollywood can’t seem to abandon that I wish he had avoided.  It’s so overused and is actually becoming borderline dangerous as it continues to permeate our culture and become accepted as a commonplace truth.  I felt not only disappointed, but actually concerned at this particular reveal in Split.

At the same time, I’m not going to saddle up to a high horse and assume that Shyamalan was attempting to make some sort of statement, here.  He wasn’t.  It was momentarily lazy writing.  And it was an ill-advised choice.  And he’s better than that.  But there was no malintent.  There were no grand, sweeping efforts at gross generalization.   And I’m not about to say that the character of Casey is somehow made weaker by being involved in the proceedings.

In truth, that was my only major problem with the film.  And it was major for me.  But I can avoid projecting, step outside of myself, and understand that it won’t be as much of a problem for most other people.  It truly won’t.  It struck a chord with me because of my personal experiences.  Whatever.  I’m a big boy and I can take it.  It’s just a movie.  And the rest of said movie is a gripping, riveting thriller.  The suspense builds to a natural crescendo, with all of the third-act events being set up appropriately throughout the earlier portions of the narrative.

There is a surprise thrown in just before the credits roll that will please many and confuse others.  Understanding the surprise is not necessary to enjoy the primary story.  I did read an interview with Shyamalan where he said this was his idea all along and he actually has had this film – complete with last-second reveal – in his head for a very long time.  I didn’t see it coming, I can say that without hesitation.  And I liked it, but it didn’t make the film for me.

The film was made for me by the atmosphere, the simplicity, the tone, and the dazzling performances by McAvoy and Taylor-Joy.  The two of them, alone, make the film worth seeing.  Split doesn’t quite hit the highs of The Sixth Sense or Signs (though I’d argue that McAvoy and Taylor-Joy provide the two best performances we’ve seen in any Shyamalan film, to date), but I’d place it in the upper echelon of Shyamalan’s films, right around Unbreakable and The Visit.  Those two performances add significantly to the overall package and Shyamalan is as much to credit as the performers for that.  I’m beginning to believe that The Visit wasn’t a fluke and I can truly start to depend upon M. Night Shyamalan for a good time at the movies, again.