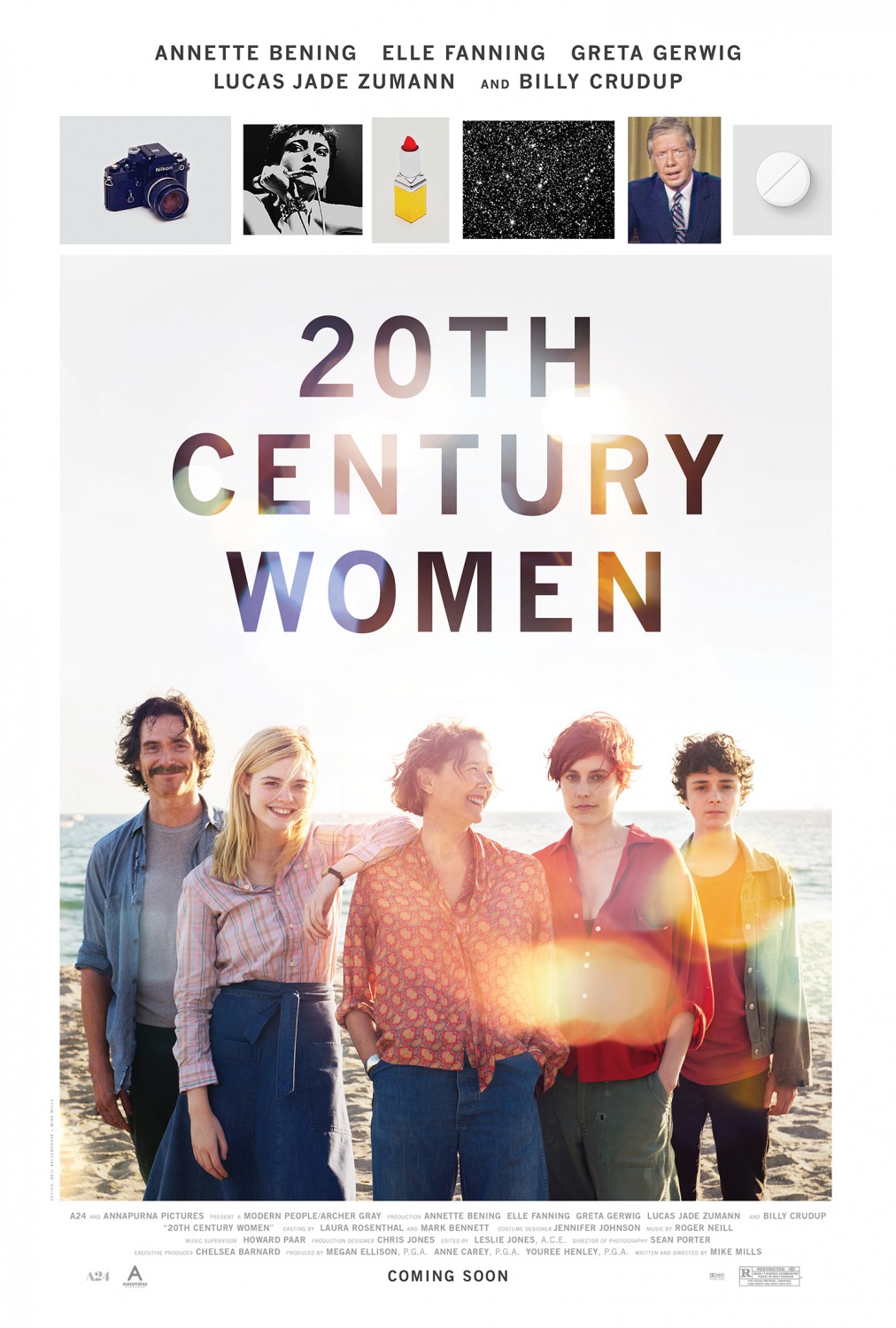 I really wanted to see 20th Century Women before the Golden Globes, but it didn’t hit wide release until this weekend, so it just wasn’t possible.  The Academy Award nominations are announced this coming Tuesday, so that may have been a factor in the timing of the nationwide expansion.  But will it get some nominations?  I hope so.

From writer/director Mike Mills, 20th Century Women focuses on Annette Bening’s Dorothea, a middle-aged mother who feels as if she’s losing touch with the world around her, and her 15-year-old son Jamie (Lucas Jade Zumann).  As a single mother in 1979, Dorothea doesn’t feel confident in her ability to raise her son without a father in a world that she doesn’t understand.  She enlists the help of two other women: her tenant Abbie (Greta Gerwig) and Jamie’s best friend Julie (Elle Fanning).

There’s a lot going on underneath the surface of 20th Century Women.  The title implies that the narrative focuses exclusively on the women, but that’s not the case, as the story is often told from the perspective of Jamie.  This is essentially his coming-of-age tale but without a distinctly masculine influence, setting it apart from other coming-of-age stories.  The women around him understand that he would be better served with that influence, but they’re at a loss as to how to provide it.  So, they set about showing him the world through their eyes.  Explaining how they see men, how they relate to men, what they want from men, what they don’t want from men, how men make them feel, and how they want to be seen for who they are rather than as who men want them to be.

It’s a tricky approach to storytelling but Mills somehow pulls it off.  No, he does better than “pulling it off”.  He excels at it.  I often hear that men can’t write women, but Mills goes a long way towards squashing that particular stereotype.  It seems to me that he might be so adept at writing them because, just perhaps, he’s also grown accustomed to truly listening to them.

That’s just my speculation.  No matter the reasons behind it, Mills and his film beautifully address the complexities in male/female relationships of various forms: familial, romantic, sexual, friendly, casual.  He confidently acknowledges what should be obvious, but rarely actually seems to be: men and women all want the same things from life.  Unfortunately, where we want to get those things and how we want them presented to us don’t always line up.  So, what then?  That’s when things get complicated.  That’s when it’s time to listen.

And here’s where I interject my own personal history into the review, but only because it’s relevant to the film and to my viewing experience.  In my life, I have come across many (not all.  I repeat, NOT ALL!!!) women who want to be heard but absolutely do not want to listen.  All of their actions are to be understood or justified, but as soon as a man does or feels something that doesn’t sync with their idea of how men should think or feel or behave, then the judging begins.  I was once hung up on by a woman (with whom I was not in a romantic relationship) just because I said that I thought Jennifer Love Hewitt was attractive.  And that’s exactly how I said it.  I didn’t say it in a crude way or with any sort of salacious undertones.  Just as a matter of fact.  I still don’t know what was wrong with that.  I also know that I didn’t choose to find her attractive.  This sort of thing happens a lot.  I’ve sometimes experienced it.  Other times, I’ve been on the sidelines as a witness.  We all hear about it in our daily lives.  If a man dates a younger woman, he’s a “pig”.  If he mentions the appearance of a woman, at all, he might be labeled as “shallow”.  If he eats at Hooters, he’s a “perv”.  It’s a reactionary labeling that is essentially a shaming of men for things that aren’t hurting anyone and are out of their control.  And there is no effort to actually understand these choices that the man in question is making.  It’s just straight-up judging.

Of course, many men do the same thing to women, though usually for different reasons and under different circumstances.  My point is not that this type of thing doesn’t happen to women; my point is that we hear all about that, but it happens to men, too – very frequently – and typically goes unaddressed.  It’s as if it’s okay.  So, as Mike Mills speaks out on behalf of women who go unheard and projected upon by men, he uses Billy Crudup’s character of William, another of Dorothea’s tenants (she has a very large house) to represent the men who are unfairly labeled without a moment of hesitation or a single discussion.  It’s done quietly and gently and poetically.  Mills doesn’t use this film to speak out of behalf of just women or men.  In 20th Century Women, Mills speaks out on the behalf of anyone who wants to feel loved for who they are.

The more I think about and reflect upon the film, the more I like it.  It’s subtleties are sinking in and it’s becoming more evident that Mike Mills has made something truly beautiful.  We are all people who are doing what we need to do to get through life.  As long as we aren’t deliberately hurting or suppressing others, being judged for simply living is wrong and unfair.  Men, listen to the women in your life.  Understand them – their needs, their wants, their desires.  All of those things won’t revolve around you.  They want to feel independent and have a place in the world, separately from you.  And women, listen to the men.  We aren’t built like you – not physically, mentally, emotionally, or physiologically.  Our biological imperatives are different and they’re there for a reason.  We can’t help it.  Of course, most everyone is in control of their actions, but not their desires.  So, if you’ve ever labeled a guy a “pig” or a “perv” because you’ve decided that he can’t control himself due to an ultimately benign action, consider the idea that perhaps what you saw was, in fact, him controlling himself.

20th Century Women is another film from studio A24 that has reaffirmed my belief that, along with Marvel Studios and Pixar, they are one of the three most consistent studios out there, right now, as far as putting out high-quality films is concerned.  This movie is a soft but poignant reminder that we are all human and we’re simply doing our best to get through each day.  Whenever we forget that about each other, bad things happen.  People get hurt.  There is no hook to this film, which makes the storytelling process much more difficult.  Holding the audience’s attention without that compelling story point can be quite the challenge.  But the dialogue and characters are so strong (with engaging performances to match) and the story, while simple, so relatable, that it doesn’t matter.  Despite the fact that I knew I had things to do after the movie, when I sensed my time with these characters was coming to an end, I felt a twinge of sadness.  I liked them all and was invested in their futures.  I wanted the best for them because the film allowed me to see inside them.  That’s the difference between a great film, such as this and Lion and a merely good film, such as Hidden Figures or Patriots Day.  If you have to make a choice, spend your money on one of the great ones.  Spend your money on 20th Century Women.