There’s something about forbidden fruit, isn’t there?  Everyone has fantasies.  Often, those fantasies are of the frowned-upon nature.  Most people don’t act upon them and likely wouldn’t even if they had the opportunity.  It’s just a psychological thing, rather than a true desire.  We like the idea that we’re capable of doing these things if we wanted to, and that tends to be enough.  But what if it isn’t?  What are the possible consequences?  That’s what Adrian Lyne addresses in this steamy thriller starring a pair of stars who just happen to double as extremely talented and visually appealing eye candy.  It’s a good mix.

Sex sells. And there’s plenty of it – or in some cases, the suggestion of it – in Unfaithful.  Unlike some films, this movie truly did need to be rated R in order to present itself honestly and with artistic integrity.  The cast is ready and willing to put their game faces on and take their clothes off, though never in an especially gratuitous fashion.  And, while in the moment, these scenes serve as titillating visual spectacles, they also serve a dual purpose.  Because a film like this – one that centers around a wife (Lane) cheating on her husband (Edward, Gere) with a younger, arguably hunkier (I’ll let those of you better-qualified than I decide that) man (Paul, Olivier Martinez) – isn’t going to be all fun and games.  When things start to go south, the viewer almost (or maybe totally?  Am I revealing too much of myself, here?) feels guilty for enjoying those earlier scenes, just as Lane’s Connie Sumner does.  The more “enjoyable” those scenes are, the more impact the Great Fall has, later on in the film.  Lyne also directed Fatal Attraction, so he gets it.  He was the perfect choice to helm this film.

The narrative isn’t particularly groundbreaking, in and of itself, and mostly plays out in a believable – yet predictable – fashion.  Yet, when the obvious story elements play themselves out, the viewer is left to wonder how it will all wrap up.  There are many different paths the story can take in the final few minutes, and it becomes a genuine curiosity as to which of those paths will be taken.

Many would write this film off as trashy schlock, but that would be a reactionary error.  There’s substance to the film.  In contrast to the Fifty Shades series, Unfaithful actually illustrates negative consequences for bad behavior.  Neither the material nor the behavior are glorified.  And, as I mentioned earlier, though much of the story is predictable, it also plays very organically; I can easily see real people in the real world behaving and reacting in the ways these characters behave and react.  It isn’t phony or exacerbated for the Hollywood Effect.  It all feels very honest. 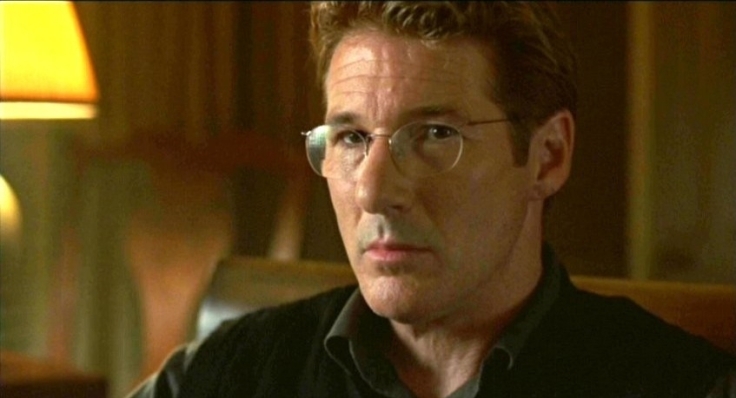 A huge reason for that is the dynamic duo of Diane Lane and Richard Gere.  Say what you want about the subject matter, there’s no question that both Lane and Gere deliver what may be their best performances.  Lane does a remarkable job of externalizing Connie’s internal conflict in a very natural, humanistic way.  She communicates entire tomes with simple facial expressions, allowing the viewer to read her mind just by giving a look or shifting her body language.  Gere doesn’t have as many opportunities to shine as Lane does, but when he gets one, he is unflinchingly powerful.  These characters are painfully, heartbreakingly flawed and vulnerable, and the viewer will feel as conflicted as they do, being so mad at them while simultaneously feeling bad for them.  Both actors are tremendous, but Lane, especially, is at the top of her game, here.  (I just now, after typing this, did some quick research and am unsurprised to discover that Lane scored Best Actress nominations at the Academy Awards, the Golden Globes, the Screen Actors Guild Awards, and more.  I didn’t remember that.  Well-deserved.)

Unfaithful is exactly the kind of film that people who think they know whether a film is good or bad before they actually see it will write off.  Everyone else will see it and be pleasantly surprised.  I had seen the movie, but not for over a decade and I’m glad I re-watched it for this column; it reminded me of why I’ve been a Diane Lane fan for so long and that Richard Gere is severely underrated, himself.  Those who are insightful enough to appreciate quality filmmaking should give Unfaithful a look, even if your instinct says otherwise.  But if you’ve already decided it’s horrible because it’s about sex/an affair, I can’t imagine you’ll be open-minded enough to change your mind as you watch it.  But make no mistake, the film is solid, Gere is haunting, and Lane is spectacular.