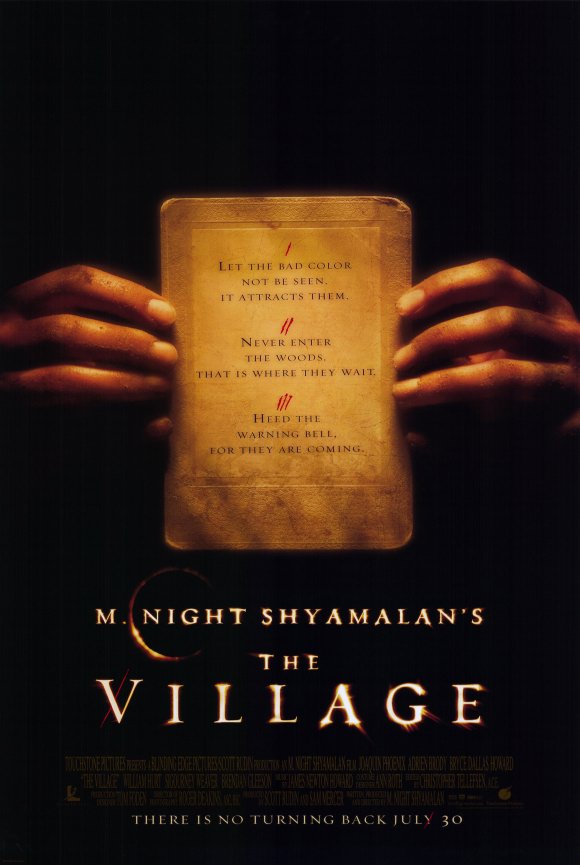 If you’re a regular reader, you may know I was once among M. Night Shyamalan’s biggest fans.  He lost me after a handful of subpar films, but has recently been winning me back with The Visit and Split.  This particular film, The Village, is where he began to lose some of the general public, who had enthusiastically embraced his three previous films, The Sixth Sense, Unbreakable, and Signs.  So, what was the problem?  And did he begin to lose me here, too?

For those who may be unfamiliar, The Village tells the story of a nineteenth-century settlement whose peaceful existence is threatened by tales of a monstrous presence lurking in the surrounding woods.  This film continued Shyamalan’s journey towards becoming a modern-day Hitchcock with his propensity for stories that exist on the fringe and often conclude with an unforeseen twist. 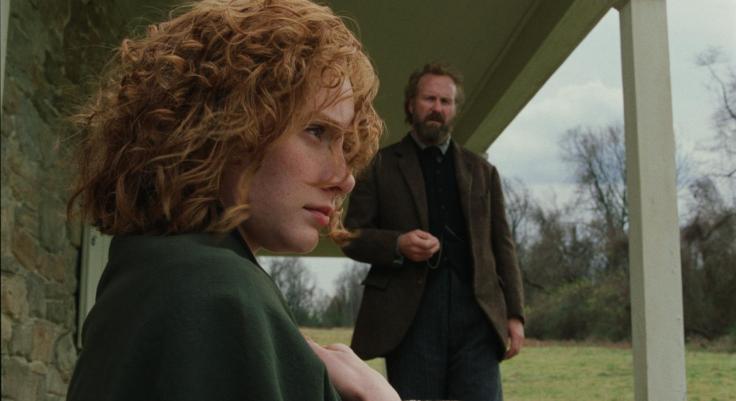 I want to start by mentioning that the cast of The Village is pretty handily the strongest cast that Shyamalan ever assembled for one of his films.  He secured William Hurt, Sigourney Weaver, Bryce Dallas Howard, Judy Greer, Joaquin Phoenix, Adrien Brody, Brendan Gleeson, Cherry Jones, and Jesse Eisenberg and still made the film for only $60,000,000.  He certainly got his money’s worth and even if one doesn’t care for the film itself, it’s still a pleasure to see all of these professionals ply their trade and bounce off of one another.  I had forgotten about most of them being a part of the film and every time a new face popped up during this re-watch, my enjoyment of the film increased.  If you believe a movie is only as good as it’s script, you’re wrong.  And this group of people are here to prove it.

Beyond that, the movie, itself, is an interesting experiment.  I remember hearing many, many people hate on the film when it was released and they all had one sole, common complaint: the twist ending.  Naturally, it’s going to be tough to discuss said twist without spoiling it for those of you who haven’t seen the film (I encourage you to watch it and make up your own mind, as long as you’re mature enough to watch it with an open mind and not be influenced by what you may have heard from others), but I fall in the middle with regards to it, leaning towards liking it.  I can admit that it’s implausible.  And, anticipating the questions that viewers would have about it as they rise up to challenge its believability, Shyamalan jumps through hoops to proactively address and answer some of them, himself (literally).  It feels a bit forced and unnaturally delivered.  The movie flows smoothly up to that point and to suddenly have exposition thrust at our faces just to satiate the haters is disorienting. 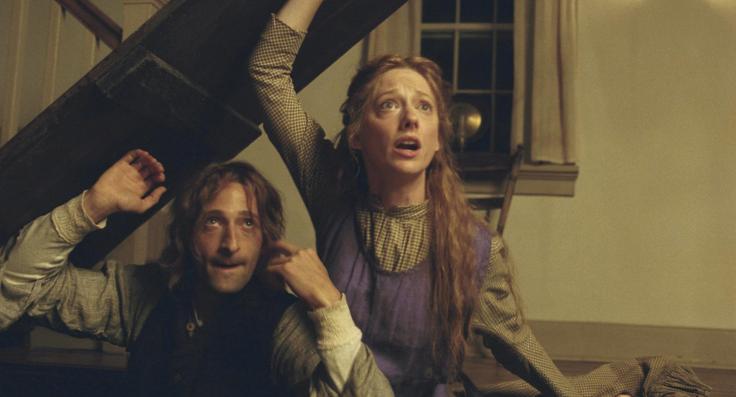 On the other hand, as implausible as it is, I’m not going to be so arrogant as to state that it’s unequivocally impossible.  But, even if it is impossible in our world, there are other perspectives to consider.  For one,  much less plausible than the twist ending is Bryce Dallas Howard’s character of Ivy.  Ivy is a fine, upstanding young woman who has just started to form her own life, independent of her parents.  She’s also blind.  Howard plays blind extremely well, never overdoing it in a desperate effort to communicate to the audience that Ivy can’t see.  However, the script requires Ivy to perform tasks that I have a hard time believing a blind person could pull off.  Early in the film, Ivy runs freely through an open field, even taking a turn to reach her desired destination.  Okay, I can buy that she grew up in her village and would know that the field is a clearing with no trees or other obvious obstacles.  I can maybe even buy that she’s so familiar with the lay of the land that she would know when to turn in order to head home.  Maybe.  But what about the little things?  Groundhog holes?  Hidden rocks?  This isn’t all, as she is also seen walking briskly while somehow avoiding tree roots and the like.  Howard does what she can to make it feel natural, but it’s a tough sell.

But another look at the story shows that it’s all one big metaphor.  And, even if the surface elements of the narrative don’t all click, the subtext works quite well.  Ivy’s affliction functions as the primary metaphor of the film as the people around her are blind to the fact that they are being controlled by others through fear, misplaced trust, and gullibility.  Fear has often been the most effective method of control and manipulation, from the early days of mankind all the way through today.  People controlled by fear will commit atrocities for their puppet masters.  They’ll betray their loved ones for them.  They’ll vote for them for president.  It’s a potent message and I can’t elaborate any further without exposing story elements that shouldn’t be exposed, but I’m willing to tolerate some of the less palatable cosmetic flaws of the film in order to fully absorb the deeper meaning. 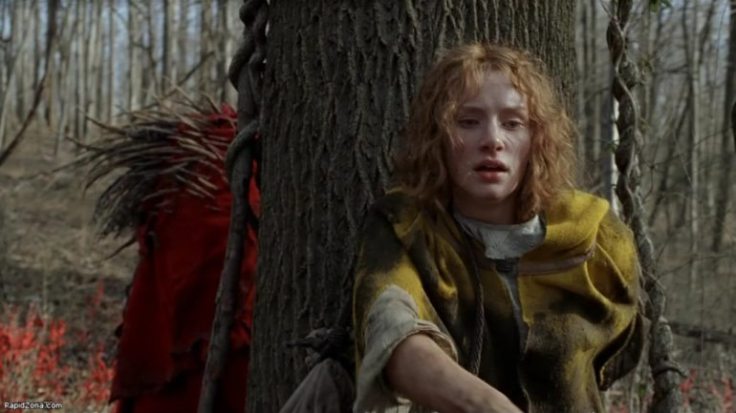 The Village isn’t flawless.  And it isn’t as strong as Shyamalan’s first three films, though I argue it’s better than any of his films that followed it, up until The Visit (Lady in the Water was rough going, but The Happening truly remains one of the worst films I’ve ever seen and it nearly killed his career for good).  No film lives or dies on its ending.  The ending can help or hurt a film, yes, but it’s never everything.  Whether one likes the ending, or not, there is more going on in The Village than the final five minutes.  It closes the circle of the comparison between the situation created and experienced by these characters and the harm we inflict upon ourselves as a society.  And the story is acted out by a cornucopia of master thespians (and Eisenberg, who is talented, but not versatile enough to be a “master thespian”.  His role is tiny, though.) who deserve respect and acknowledgement for the subtleties they inject into the film.  An insightful viewer will find enough meat to The Village to consider it worthwhile.