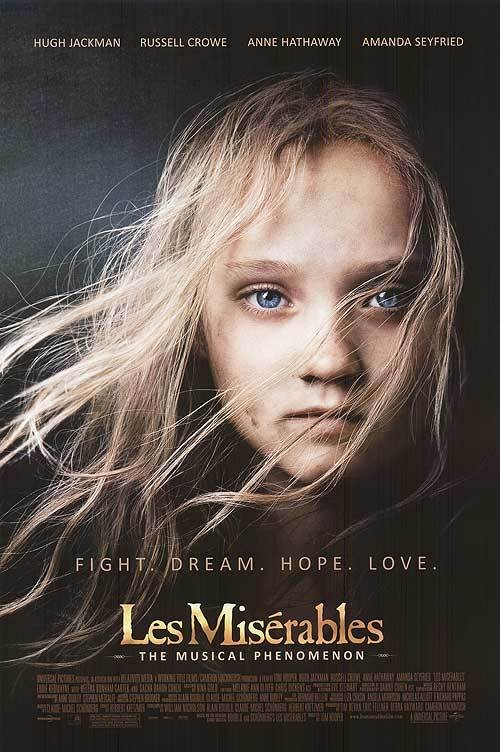 I was just talking about this movie, a few weeks ago, when I did a #ThrowbackThursday post for 2004’s The Phantom of the Opera by Joel Schumacher.  Like that one, Les Misérables is a beloved musical (though probably more highly-regarded than Phantom in literary circles) that has seen many different interpretations over the years.  This particular incarnation came from Tom Hooper who was riding a wave of momentum following the massive box office and critical reception of his previous film, The King’s Speech.  That one won Best Picture at the Academy Awards (and elsewhere) and while Les Misérables couldn’t quite make it two in a row for Hooper in that regard, it still earned a nomination in that category, wins in other categories, and a massive total at the worldwide box office, solidifying the film as an unqualified success.

Set in nineteenth-century France, Les Misérables tells the story of Jean Valjean (Hugh Jackman), a man who was imprisoned for nineteen years after stealing bread to feed his nephew.  Upon his release, he fails to report in, thereby breaking parole and putting himself on the run from policeman Javert (Russell Crowe).  In the meantime, Valjean sets up a new life for himself, and agrees to care for the daughter of the impoverished Fantine (Anne Hathaway).

There’s a lot going on in this story and there are a couple of time jumps involved, as well, to push the narrative along to its relevant plot points.  I’m of two minds about the film, feeling that the execution could be stronger but also unable to deny the inherent power in the performances and many of the musical numbers.

Jackman is in his wheelhouse (or at least one of his wheelhouses) as the lead star.  His background is in musical theater, so he makes it all look easy as he sings, acts, and emotes all over the place.  Valjean is a good man with a good heart who has been on the bad end of circumstances and spent a lifetime paying for it.  He hopes to lift up others around him so they won’t have the same experiences but Javert makes it difficult with his relentless pursuance.

Russell Crowe’s casting as Javert was the strongest point of contention upon the film’s release at the end of 2012.  Most will agree that Crowe is a fine actor and he does nothing to bring that into question, here.  It’s his singing that raised some eyebrows among both audiences and critics.  He was the reason I brought this film up during my look back at Phantom of the Opera as Gerard Butler’s vocal ability was also questionable in that film.  Crowe isn’t the best singer, but, after hearing them so close together, I can state with confidence that he’s better than Butler.  Truth be told, Crowe isn’t a bad singer, but he is an average one.  And average stands out when surrounded by the likes of Jackman, Hathaway, and others who can really go.  I imagine he felt insecure and nervous about his abilities, so my hat’s off to him for sticking it out and doing his best.  He’s actually okay, but he was hired for his presence and acting ability and he still excels in those areas.

Speaking of excelling, Anne Hathaway manages to essentially steal the entire picture with one scene and one song.  Her performance of “I Dreamed a Dream” may be the single greatest musical performance ever committed to film.  Les Misérables got much praise for recording the cast’s singing live on set as they were being filmed, rather than in post-production ADR (automated dialogue replacement – i.e. dubbing).  The entire movie was certainly helped by that decision and none more so than Hathaway.  For the scene, Hooper places the camera in her face and just sits back while she kills it in one, unbroken take.  And, though the take was unbroken, hearts were not, as she grabbed the entire world and forced them to feel her pain and sorrow.  It’s raw and it’s real and it’s everything that every performance in every movie should be.  I thought to myself immediately, when seeing the film in the theater, that she needed to win an Academy Award for the part.  And she did, securing Best Performance by an Actress in a Supporting Role at the Oscars, just a couple of months later (she didn’t have enough screen time for the Leading Role category).  She honestly just didn’t have any competition; Hathaway is just that good, here.

That scene happens relatively early in the film and while I’m not going to say that it’s “all downhill” from there, her big moment is certainly the high point of the film.  Still, there’s plenty of good to follow, even if none of it is iconic, as Hathaway’s scene is.  Sacha Baron Cohen and Helena Bonham Carter lighten the mood with a delightfully fun performance of “Master of the House” (for which I will forever incorrectly sing the lyrics, thanks to George Costanza on “Seinfeld”).  And in any other film that didn’t feature that Hathaway performance, Samantha Barks would have been the talk of the industry for her version of “On My Own”, which, to her credit, is almost as powerful as Hathaway (it’s actually my favorite song in the film).  Eddie Redmayne really delivers with his performance of “Empty Chairs at Empty Tables”, as well, and the conclusion to the film actually made me teary-eyed during this re-watch, which I don’t remember happening, before.

So, yeah, there is much good to be had in Les Misérables.  But I have one big issue, as well.  I mentioned in my Phantom review that I’m not crazy about dialogue being sung outside of dedicated songs, and that’s almost all we get, here.  There are very few spoken lines.  I understand that’s a personal preference and mileage will vary, but sometimes the singing is harder to make out than speaking would be – especially in large choral arrangements.  As a result, it can be very easy to miss something important – not because the viewer isn’t paying attention, but because the line was sung so quickly or so quietly, in preparation for the next one that’s about to be projected, that it was nigh unintelligible.  For example, suddenly, a character may be dying and you might have no idea why.  And that might happen three or four times.  Don’t write me; I know why the characters die, but it’s not because it was made clear by the filmmakers.  If you have no problems understanding sung dialogue, then you’ll have no issues, here.  If you do, however, come with a backup plan to make sure you’re following all of the events of the film.

Despite not being a perfect viewing experience, there’s little arguing with the power of the film and the high level of performance from the cast.  The movie is a bit of a marathon and there’s some downtime between the truly notable songs, scenes, and moments, but, overall, it’s a rewarding experience that will leave a lasting impression if the viewer gives themselves over to it.