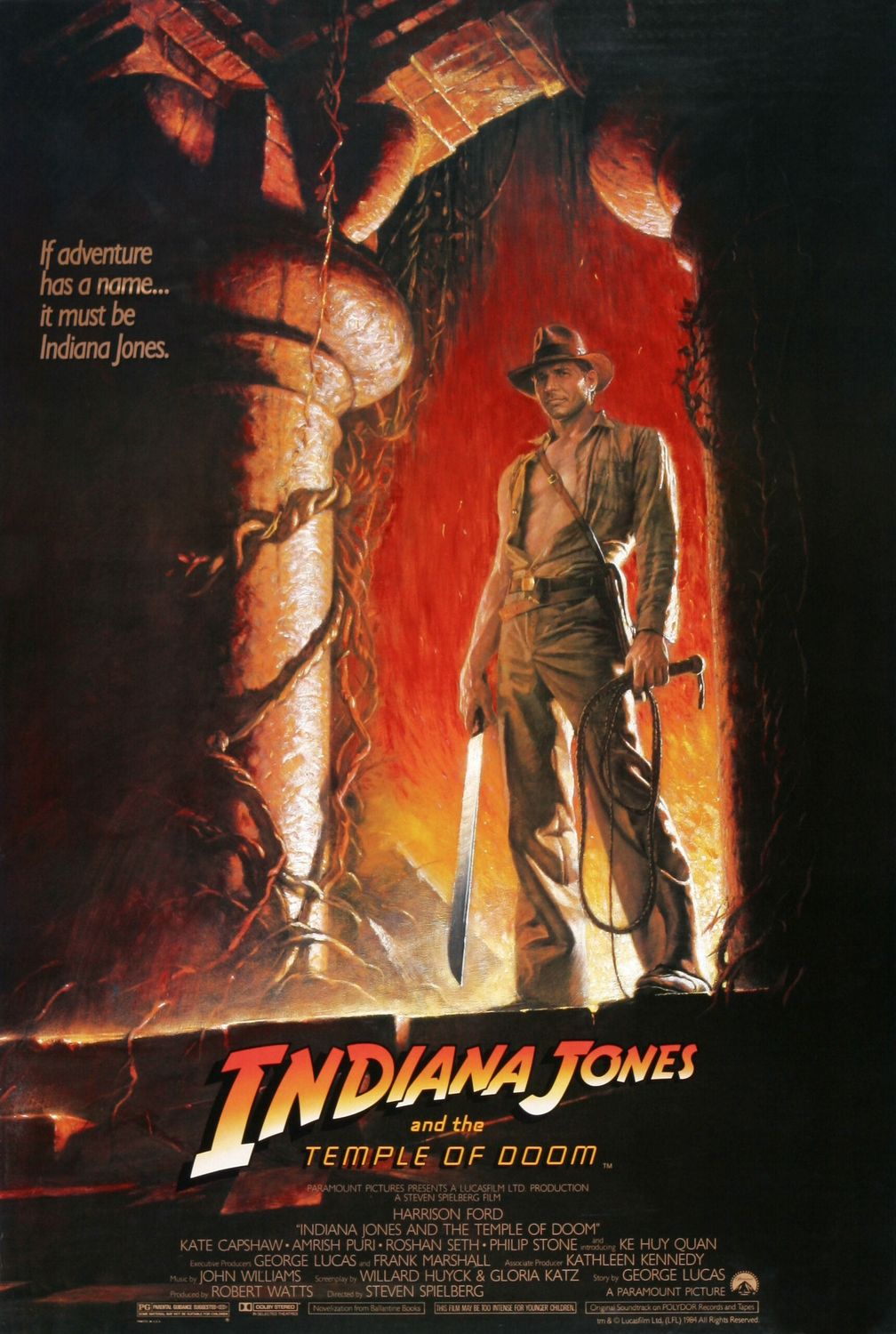 Indiana Jones and the Temple of Doom was Steven Spielberg’s follow-up to his massively successful Raiders of the Lost Ark (for which I previously did a #ThrowbackThursday column, which you can find here).  It was a follow-up at a time when follow-ups were, though not quite unheard of, rare.  (Notice I didn’t say it was a sequel.  Because it isn’t.  It’s a prequel.)  It was an easy proposition; the original film made more than 21 times its budget, and this one followed up by making almost twelve times its own (making 2.5 times the budget typically guarantees profit).  Indiana Jones had become a pop culture phenomenon and Harrison Ford successfully made the leap from Star Wars star to genuine movie star.

Despite its financial success, this particular installment in the Indiana Jones franchise wasn’t as critically well-received as its predecessor, and it’s easy to see why, as it’s quite a mixed bag.  Ford, himself, is as commanding as ever as the titular Dr. Jones, but his supporting cast doesn’t fare quite so well.  Accompanying Indy on this adventure are two notable and memorable accomplices.  Since we last saw him, Indy has found a young Chinese boy who goes by the name Short Round.  Short Round works as a driver and a sidekick for Indy, tagging along wherever he goes and doing what he can to carry his own weight.  Opinions vary on Short Round, but put me down as a fan.  Not only is he unique, but Jonathan Ke Quan (then billed as Ke Huy Quan) turns in a solid performance.  Under other circumstances, he would come across as a little over the top.  But he’s a kid!  And kids are over the top!  So, it works, especially since he never overdoes it.

The final third of our protagonist trio doesn’t fare as well.  Playing vivacious nightclub singer Willie Scott is relative newcomer Kate Capshaw.  Watching Capshaw try to act makes me think about what would happen if I took a mediocre Algebra student and put them in charge of teaching my Statistics class.  Occasionally, they’d get something right just by sheer luck, but they’d spend most of their time trying to fake it until they would hopefully make it.  There are moments when Capshaw is fine (her reaction to the Snake Surprise is pretty much exactly what mine would have been), but she’s never good – much less great – and she’s frequently bad.  I’ll even go so far as to say that her delivery of the infamous, “We’re not sinking – – WE’RE CRASHING, AHHHHH!” line is among the worst I’ve ever seen in all of film, TV, stage, local theater, and even high school plays.  She’s over-the-top, unnatural, and just can’t seem to relax.  Her casting worked out for director Steven Spielberg, because he and Capshaw eventually married in 1991, but he’s the only one that benefitted.  She was way out of her depth in a movie that didn’t even require that much depth to begin with.

Aside from Quan and Capshaw, the villains are also silly and exaggerated.  Part of it is in the writing (the film even ends with a clichéd everybody-laughs-at-something-that-isn’t-especially-funny moment), but much of it is in the performances.  This starts right at the beginning in Club Obi Wan (an early example of an Easter egg) where Indy meets Willie during an encounter with nefarious Chinese diplomats.  The characterizations are by far the weakest aspect of the film, affecting virtually everyone except for Indy and, arguably, Short Round.  Nobody else is even remotely believable, whether it comes to the writing or the performances.

And the writing makes other questionable choices, as well, often pushing forward with an idea just for the sake of doing it.  One moment, Indy and Willie can’t stand each other and she’s being portrayed as an annoying nag, and the next, they’re flirty and lovey with no transition or explanation.  And they aren’t just hoping for a hookup; supposedly true feelings and attraction simply materializes out of nowhere.  This is just one example, but the film seems determined to check off as many tropes as possible.  On top of that, the film is oddly a prequel, though there’s no story points that necessitate such a choice.  Living through this adventure even contradicts Indy’s declaration in Raiders that he doesn’t believe in magic.  So, yes, the writing here is weak.

On the flip side, the setting and action scenes are a lot of fun.  For me, in particular, I still consider the mine cart chase to be my favorite scene in the entire franchise.  And it was an influential one, too.  Its impact can still be felt in everything from other movies (the Harry Potter series) to video games (“Donkey Kong Country”, “Final Fantasy”).  The entire final third of the film, once they enter the temple, is a pretty raucous ride, with plenty of engaging, innovative excitement that is quite frankly so good that it tips the scales and makes the film enjoyable in spite of its many other flaws.

Indiana Jones and the Temple of Doom is not as highly regarded as other films in the series, but it has its moments.  Unfortunately, many of them are bad.  But what’s good is very good and no film geek is worth their street cred without having seen this one at least once.  The extended, pulse-pounding finale makes all of the tedious build worth it, in the end.