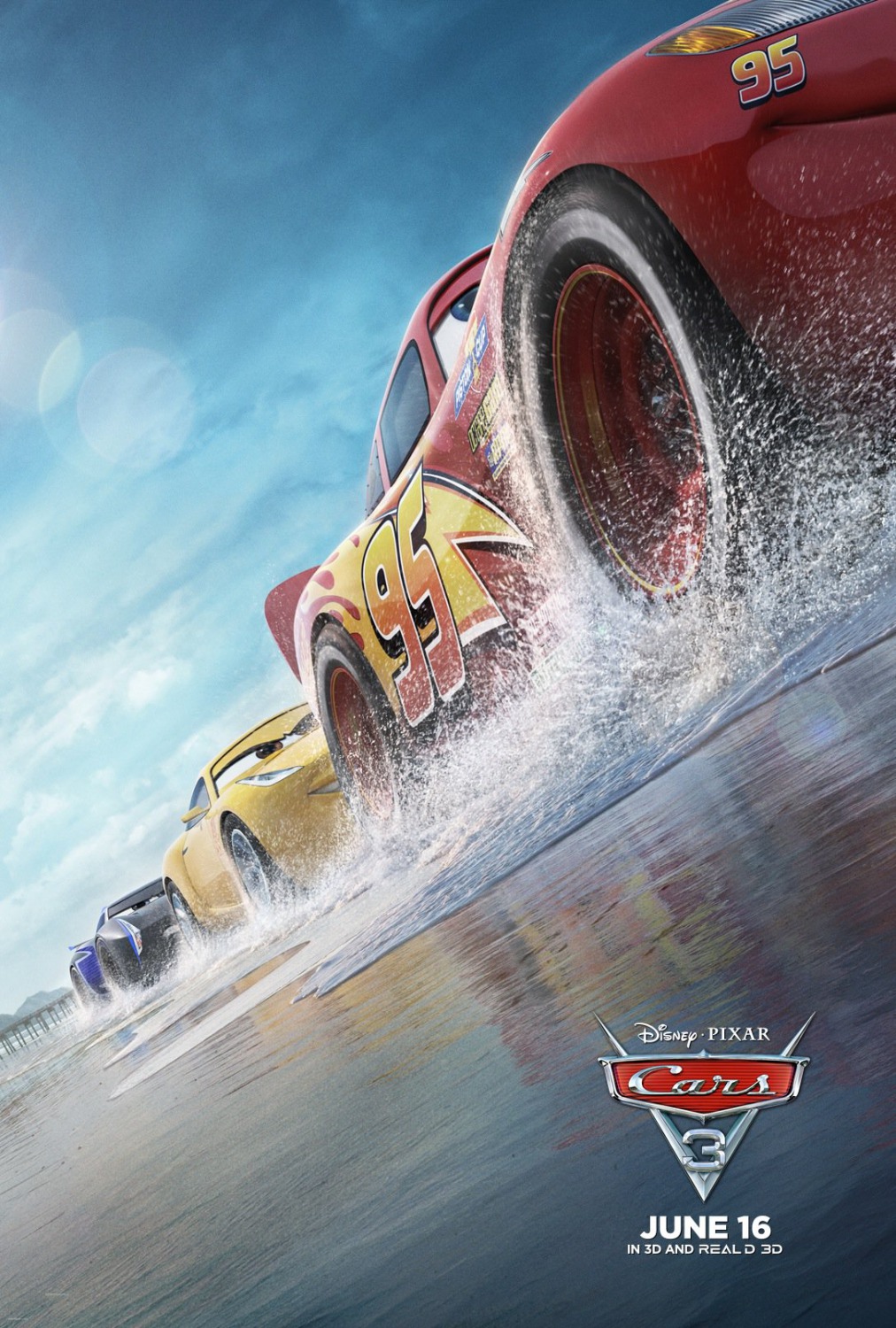 I went to Charlotte and then Florida for 12 days but now I’m back and ready to play catch-up with the movies that came out while I was gone.  I’m starting with the first big release that I hadn’t gotten to catch, Pixar’s Cars 3.  The Cars franchise is a bit of an anomaly for Pixar.  The first one was pretty well-liked (I loved it), but its sequel is almost universally accepted as Pixar’s worst film (it is).  It abandoned most everything that Pixar has come to be known for and played more to the less-discerning masses.  Objectively speaking, it wasn’t as horrible as the knee-jerk reactions were all suggesting at the time of its release, but it certainly wasn’t up to Pixar’s typical standards, either.

Despite that, it made a bunch of money – mostly through ancillaries (action figures, merchandise, etc.).  And I genuinely think that the good folks at Pixar sincerely wanted a chance to redeem themselves and this property in the eyes of true film lovers.  The financial success of the previous sequel provided them with the justification for giving themselves that chance.  It was clear that Cars 3 was going to be more in line with previous Pixar offerings when the mysterious and intriguing teaser trailer first landed, a number of months ago.  I was immediately sucked in and found myself eagerly anticipating this film so I could see what they had up their sleeves.

While Cars 3 doesn’t stand at the level of the true Pixar giants (Up, all three Toy Story films, The Incredibles), it serves as a high-quality course correction for the series and as vindication for Pixar in the footsteps of their most notorious film.  In this back-to-basics follow-up, after a career of nearly unprecedented success in the racing profession, Lightning McQueen finds himself suddenly upstaged by a newcomer (Jackson Storm, voiced by Armie Hammer).  With the help of a new trainer by the name of Cruz Ramirez (Cristela Alonzo), Lightning sets out to revamp and reinvigorate himself with the goal of once again becoming competitive against a younger, stronger, faster generation of racers.

Starting with the obvious, the film looks amazing.  I feel like I say this with every single Disney and/or Pixar release, but they are both so far ahead of their competition in this regard that it simply bears repeating, every time out.  To not mention it would be a metaphorical crime against the meticulous artistry put into the work.  The textures, the shine, the colors, the detail are all photo realistic.  The “battle-damage” that the cars suffer as they get scratched and banged up is mind-blowing in its minutia.  And the high-octane energy put into the races, themselves, is unabashedly thrilling.  I wish I had gotten to check this one out in 3D.  I guess I’ll have to wait for the blu-ray.

Thematically speaking, this film is the Cars version of Rocky V.  Or perhaps it’s a fictionalized account of modern Roger Federer.  Lightning is desperate to keep himself from becoming Old Yeller.  It’s a very relatable tale – and one that has been tackled before in various forms.  But it’s a unique approach to the story with several extra layers to keep it fresh.  The most notable of those layers would be Lightning’s aforementioned trainer Cruz Ramirez.

Cruz is my new favorite character in the Cars franchise.  She’s funny, endearing, infectiously enthusiastic, and completely heartfelt and sincere in her efforts to help Lightning succeed in his goals.  The interactions between the pair are consistently amusing as each represents a different generation with opposing methods for achieving similar ends.  Cruz is very much the modern millennial, with a technology-based approach that focuses on the bigger picture.  Lightning swears by his more practical training methods that are focused towards very specific goals.  Neither is wrong; both can learn something from the other.  Watching them discover this is a blast.

What really sets Cars 3 apart from many other films of its ilk is its complexity.  There are no true villains in the film.  Yes, there’s a cocky archrival in Jackson Storm, but it’s not like Storm is trying to Tonya Harding his way to victory.  He wants to earn it on his own merits.  At the same time, there is competition between characters we like, as well.  As clever as Pixar is in crafting the denouement (an they are very clever), they make sure to not send an unrealistic message to the kids out there.  Not everyone can be on top and – at some point – everyone must step aside.  Whether that happens now or later for Lightning, that idea is not avoided, which is gutsy for an animated film.  But we’ve come to expect guts from both Disney and Pixar, so it shouldn’t be too surprising.

I applaud Pixar.  They have redeemed themselves and the Cars series with a very worthy third installment in the franchise.  So far, it appears as though it may be too little too late, though, as the box office is reeling from the reputation of the preceding sequel.  Don’t let Cars 2 scare you off of Cars 3.  This is the film we all wish we would have gotten, last time.