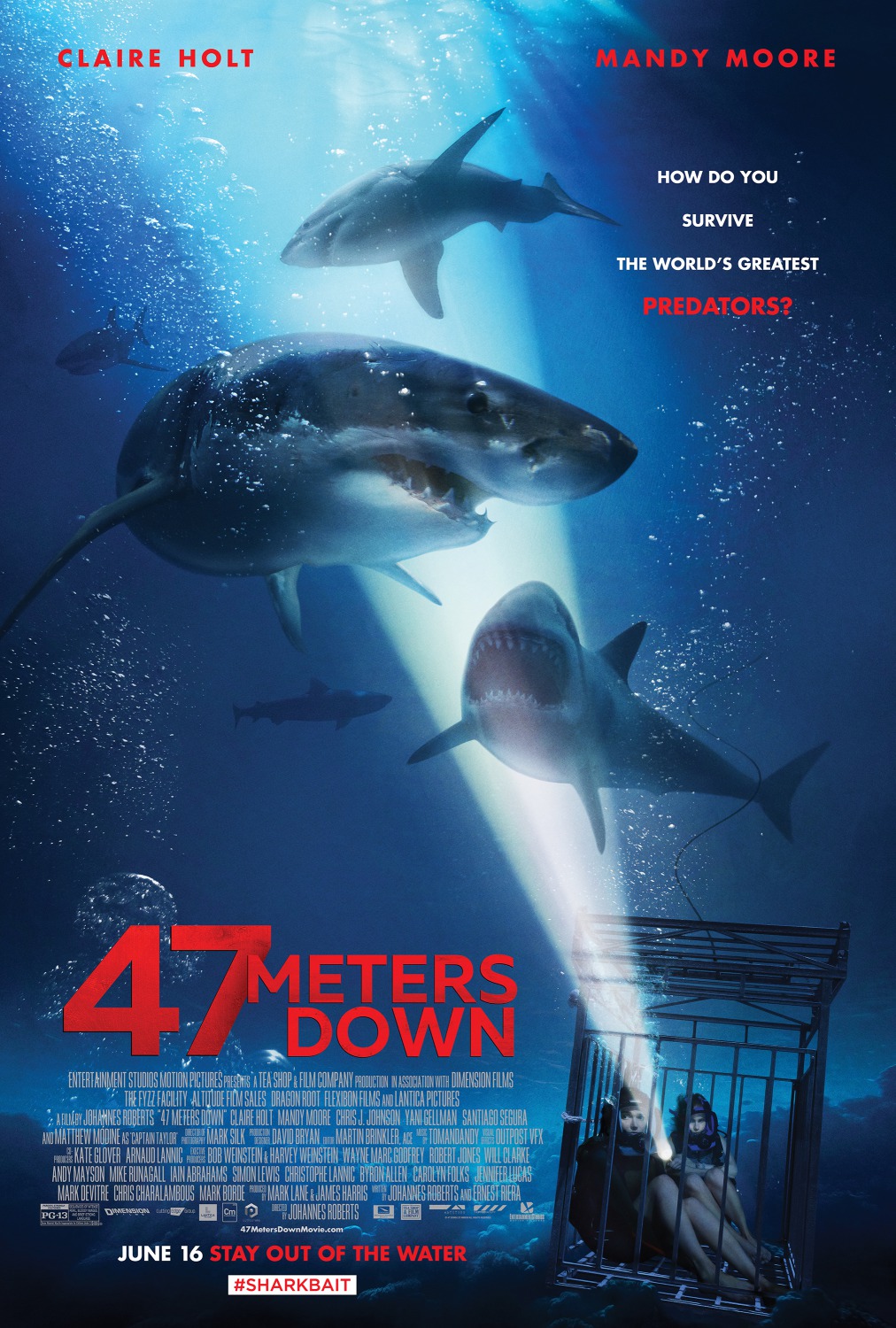 47 Meters Down was a scary proposition to me.  Not because I’m scared of sharks.  No, it’s because I’m scared of the director, Johannes Roberts.  Last year, Roberts directed The Other Side of the Door.  I hated that movie.  I hated it so much that I actually included it in my list of The Five Worst Films of 2016.  But, on the flip side, another shark movie from last year – The Shallows – made my Top Ten films of the year.

47 Meters Down may look like a copycat trying to capitalize on the success of The Shallows, but that’s not true as 47 Meters Down was in development long before The Shallows was released (to great success).  In fact, 47 Meters Down was originally supposed to be released straight to disc and on-demand under the title In the Deep.  Perhaps the success of The Shallows did play a part in Entertainment Studios’s decision to purchase the film from Dimension and then release it theatrically.  But the film, itself, was not influenced by 2016’s outstanding Blake Lively vehicle.

Regardless, the question remained: could the man who delivered that atrocious horror film in early 2016 also craft a solid shark thriller?  I thought it was worth a shot to find out for myself.

The premise of 47 Meters Deep is simple: two sisters, Lisa and Kate (Mandy Moore and Claire Holt, respectively) go shark diving in a cage while on vacation in Mexico, when the wench that keeps the cage attached to the boat on the surface fails and they sink to the bottom of the ocean.  Not only must they concern themselves with the sharks that are infesting the area, but they have limited oxygen and run the risk of dying from the bends if they attempt to swim to the surface too quickly.

With so many shark movies out there – and one especially fantastic and successful one, just last year – what makes this one a story worth telling?  Well, it comes down to the added story elements I mentioned up above.  47 Meters Down essentially flips the script on the typical shark movie by stranding the protagonists in the ocean, where the sharks have the home field advantage.  Normally, the humans have some sort of refuge – or at least some leverage – simply by having access to the surface in some way.  In Jaws, they had the boat (though they needed a bigger one).  In The Shallows, she had her rock.  In Deep Blue Sea, they had an entire research installation.  The closest shark movie that I can think of for comparison is Open Water.

But in 47 Meters Down, there is the added component of being underwater, with limited time left before drowning inevitably occurs.  The urgency in the film is omnipresent and palpable, building nicely to a high-octane climax.  In addition, the narrative is unpredictable, playing with convention, and it’s clear that Roberts has a lot of fun making the audience believe they know what’s coming and then pulling the proverbial rug out from under them.  The unpredictability and the fact that the film is essentially adrenaline in celluloid form are enough on their own to make this film far superior to The Other Side of the Door.

But it’s not perfect.  The dialogue can be hammy and unnatural, even bordering on parody.  This problem seems to exist solely with Mandy Moore’s Lisa, for some reason.  That leads me to believe that it’s the result of the performance choices she was making and not the writing, but that’s just my speculation.  Otherwise, she does a fine enough job (not Blake Lively-level, though) and the dialogue is perfectly acceptable outside of this (relatively sizable) handful of instances.

The main area where Roberts is still showing his inexperience is in shot framing.  The all-too-common problems of quick cuts and tight shots permeate nearly the entire film, once the leads sink to the ocean floor.  As a result, it is commonly difficult – and even occasionally near-impossible – to discern what is taking place on-screen.  And it’s not even limited to the action scenes, though that’s when the issue is the most problematic.  This has plagued certain directors for decades and it seems less common than it used to be, but it unfortunately infests much of 47 Meters Down.

So, in short, 47 Meters Down is excellent in concept and average in execution.  It is certainly an exciting 90 minutes, in spite of its flaws, but there are better films in theaters, now, that are just as exciting.  And of you haven’t seen The Shallows, shame on you and watch it instead, if you have to choose between the two.  If, however, shark movies are your thing, you’ll have enough to enjoy here to make it worth your time.