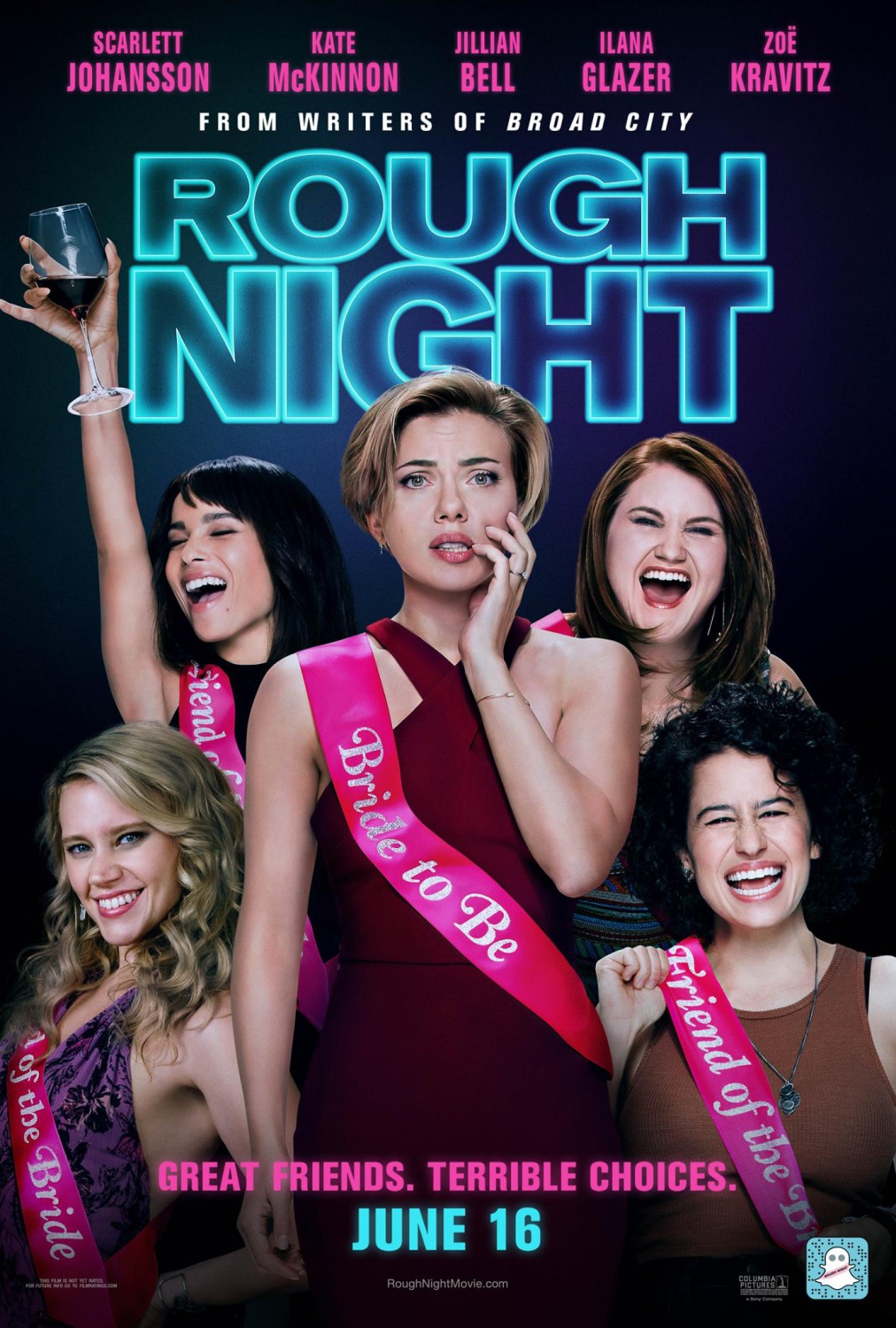 I’ve sometimes lamented about how tough comedies can be for me to review.  The mileage for senses of humor varies wildly and what’s funny for one person is rarely the same as what’s funny for the next.  It helps when the comedy in question has more going on than simply an effort to get laughs and, luckily, that’s the case with Rough Night.

Directed by Lucia Aniello, Rough Night tells the story of five friends going away for a bachelorette party as one of them, Jess (Scarlett Johansson), is on the cusp of marriage.  When Frankie (Ilana Glazer) acquires some recreational drugs and Blair (Zoë Kravitz) suggests they hire a stripper, things go south extremely quickly. 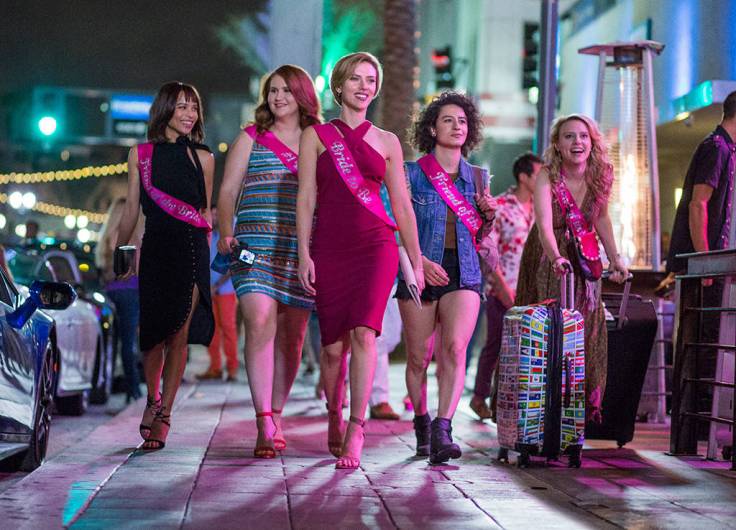 In terms of tone and theme, Rough Night is much like a cross between The Hangover and Weekend at Bernie’s, but with female leads, of course.  In fact, the switch of traditional gender roles in this sort of debauchery-based-humor film is deliberately played up for laughs, as the corresponding bachelor party isn’t exactly what one would expect, nor are the sensibilities of Jess’s fiancé Peter and his friends.  It’s a fun switcheroo for those looking for that sort of thing and I always appreciate when a film plays with convention.

There is very much a women-can-do-whatever-men-can-do feel to the entire production (which I wholeheartedly endorse), but with a twist.  Usually, that idea is supported in film by illustrations of women doing great and wondrous things, as men are so often portrayed as doing.  Here, the filmmakers go the other direction, proclaiming that women can be just as depraved and irresponsible as men can be.  That is not often a perspective represented in movies (though it may now become a trend – one that was started by Bad Moms) and I happen to see it as a good thing.  Women are often held to impossible, nearly inhuman standards to the point where they are sometimes socially punished for being themselves and showing basic human needs and desires.  Jess and her friends are written and acted as complete, round human beings with good sides and bad sides, careers and hobbies, brains and hearts, and everything that makes people people. 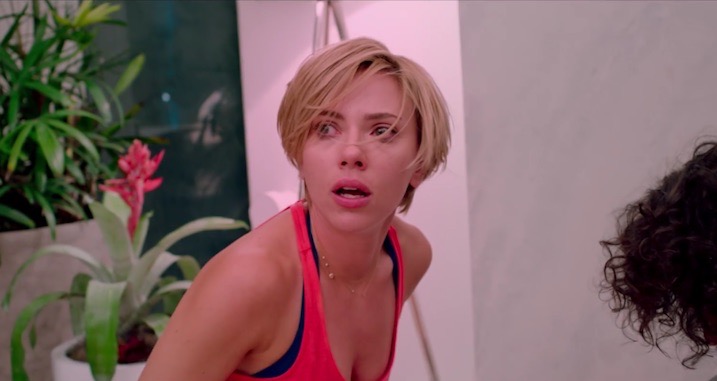 Most of this is conveyed through – naturally – comedy.  And it’s pretty good comedy.  It’s not cracking my Top Five Favorite Comedies, but it’s certainly above average in that regard, and I was consistently chuckling and smiling throughout the film.  Kate McKinnon’s Pippa is probably the funniest, as much because of McKinnon’s experience and subtleties as anything else, but each cast member gets some time to shine and even Peter gets a worthwhile subplot on his own that runs concurrent to the primary events of the film.  Of course, this is all subjective, as stated above, but all I can do is give you my own personal take.

Johansson is the star, but she’s more than content to let her co-stars shine, and the film benefits greatly from it.  If I have one criticism, here, there are a couple of greatly entertaining supporting characters portrayed by name actors who sort of just vanish after their big scene.  I would have liked to have seen some follow-up to their monumental achievement that occurs about halfway through the film.  To say anything else would be to spoil, so I’ll stop there, but it’s a minor nitpick, in the grand scheme of things. 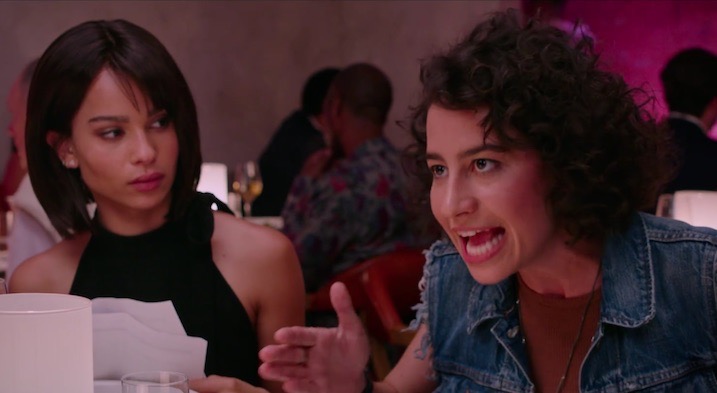 The film earns its R-rating but it’s mostly through dialogue.  There is a very healthy dose of profanity and immensely suggestive language, but visually speaking, things are kept to a hard PG-13.  There is no real nudity and anything sexual is suggested off-screen.  That’s just for your information, in case you were thinking of seeing this with your mom, or something.  I have no strong feelings either way towards the content, as I’m fine with it being explicit and I’m fine with it being restrained.  I understand both approaches; to each their own.

Rough Night is a fun alternative to the typical deluge of big-budget summer spectaculars that are assaulting theaters, right now.  I certainly enjoyed it much more than Transformers: The Last Knight in essentially every way one can prefer one film over another.  While not the OMG-Greatest-Comedy-EVAR!, it’s absolutely another feather in the cap of female-driven filmmaking, both in front of and behind the camera.  But one doesn’t have to be or identify as female to have a good time, here.  For a lighthearted, potty-mouthed escape from real life, Rough Night is a great couple of hours at the movies.