“The man in black fled across the desert, and the gunslinger followed.”  That simple sentence commences the first chapter of Stephen King’s DARK TOWER series, entitled THE GUNSLINGER.  Consisting of an eventual seven novels telling the primary story (with a couple of other tangentially-attached installments) THE DARK TOWER is King’s magnum opus, taking him 30 years to complete.  Through the TOWER story, not only are all of King’s works connected, but so is our own world, and many others, including Marvel Comics and the universe of Harry Potter.  It was a connected universe before Marvel made connected universes trendy.  It’s also my personal favorite prose story I’ve ever read.

There has been shockingly little buzz around this movie, which has had me relatively concerned.  No big San Diego presentations, no huge trailer reveals, not a lot of Idris Elba or Matthew McConaughey getting the word out on the talk show circuit (that I’ve seen), and not even 3D or IMAX releases for the film.  For a movie that so many people have begged for and anticipated for so long, where’s the excitement?  It’s true that not a lot of people read, anymore, sadly, so maybe that’s it.  Plus, the project has suffered from an ongoing stop-and-go process of development hell for many years.  Perhaps the public has lost faith?

As of now, the plan is for the epic tale to be told over time through a combination of film and television, with the first season of the television show telling gunslinger Roland Deschain’s (Idris Elba) backstory, as laid out mostly in WIZARD AND GLASS, the fourth novel in the series.  That all depends upon the success of this initial film, which is a loose adaptation of the first novel, THE GUNSLINGER.

And, let me stress, that it is a very loose adaptation.  This film mostly takes elements from THE GUNSLINGER and the second novel THE DRAWING OF THE THREE, with the narrative leaning heavily towards the latter.  Before seeing the film, I noticed in comment sections (never read the comments) that hardcore fans didn’t really know what this film was going to be.  Some were convinced that it was intended to be a straightforward adaptation of THE GUNSLINGER.  That was not the case.  Others were equally convinced that the film was designed to actually be a follow-up to King’s novels.  Those of you Faithful Readers out there who are familiar with the books as written by King understand that ka is a wheel and that designing the film(s) with that goal in mind would certainly be possible.  And I can’t say if that’s the intention behind the project.  Only those involved in its production can.  But I can’t rule it out, either.

What I can say that the film is not what longtime lovers of the books have been envisioning over the decades.  And that’s been a complaint for a while, long before any footage had been shown or even filmed.  A subset of the audience were up in arms over Elba’s casting as the traditionally-Caucasian Roland Deschain.  Sit down.  It wasn’t a problem.  But too many people freak out over CHANGES.  “Hey, can you believe all of those CHANGES?!”  “Why do they always have to CHANGE everything?!”  “Her hat was supposed to be red, not blue!  CHANGES CHANGES CHANGEEEEEEES!!!”

I’ll get back to that in a moment, but the important aspect isn’t that CHANGES were made; it’s whether the resulting product is stronger and/or more appropriate because of them.  Even more important is whether the film is strong on its own, independent of its original source material.  Most people haven’t read the books and never will (“Ewwww!  Books are hard!”).  So, how does the film play to those people?

I can only speak for myself, but if I had to guess, I’d say it will play as an acceptable but unremarkable moviegoing experience.  The negative reviews had me nervous going in, but the film is nowhere near as bad as its Rotten Tomatoes score suggests.  The story is told from the perspective of Jake Chambers (Tom Taylor), a New York City boy who is having flashes of other worlds and the legendary, magical figures who inhabit them.  When he encounters one of these figures in the form of legendary gunslinger Roland Deschain, they must stop the evil Man in Black (McConaughey) before he destroys the protective pillar of all life, the Dark Tower, and invades all of our realms using the creatures who live just outside the borders of all reality.

The film isn’t awful, but there are changes I would suggest that might have made it a more resonant, meaningful experience than it ended up being.  Director Nikolaj Arcel and his fellow filmmakers take great pains to ground the film in a more palatable reality for the benefit of the unconverted audiences that must be relied upon for financial success.  A lot of time is spent in our own world – referred to as Keystone Earth, though readers of THE GUNSLINGER know that not one single moment in the book takes place in our universe or on our Earth.  This may or may not have been an ill-advised creative decision on the part of the filmmakers, but it did result in Jake becoming an unnecessary audience surrogate and a resulting disconnect between the viewer and Roland.  The basic building blocks of Roland are present, but we never fully get to understand him.  On the other hand, we spend too much time getting to know McConaughey’s Man in Black (or Randall Flagg or Walter o’Dim, depending on your preference).  We see his backstage machinations and hear his motivations, removing any mystique behind the character. 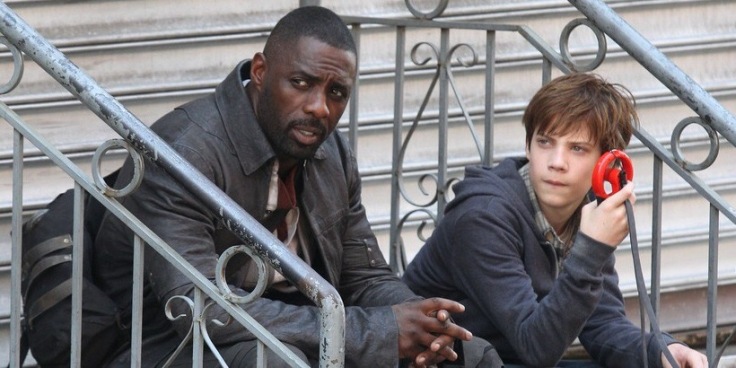 The film isn’t lacking in entertainment value, however.  The crowd in my screening (props to Sony for scheduling preview night screenings to begin at 7:19 pm, or 19:19 in military time, a meaningful number for diehards) enjoyed themselves, laughing at the right times, and never appearing restless or uninterested.  The cast does well and the pacing is brisk.  The action is sufficient, but not particularly large-scale.  Still, it’s competently crafted and not without merit.  The film is not “bad”.  It’s just conflicted.

Sony had a tough task ahead of them from the beginning.  The core DARK TOWER fanbase is not large enough to yield a profit on a production of this scale.  That’s just simple math.  Therefore, Sony understands that the film has to appeal to general audiences.  So, if you’re one of the diehards out there, railing about all the CHANGES, ask yourself this simple question, and answer it honestly: Would a straight adaptation of THE GUNSLINGER appeal to general audiences?  The answer is obviously that it wouldn’t.  It’s too unconventional and outside-the-box for mass-market entertainment.  Sony couldn’t make that film.  And it might be your fault.

So, what to do?  Well, they aimed to ease the audience in by splitting the movie between our world and Roland’s.  I can’t honestly blame them.  Had films like those I mentioned above been the beneficiaries of rampant financial success, I’d be singing a different tune.  But American audiences are absolutely closed-minded.  And so, Sony tried to have its cake and eat it too by creating a film that is neither here nor there.  There’s not enough of . . . well . . . anything to make the film stand out in a very crowded marketplace amongst some very strong competition.  The people who see it won’t regret it.  But they also won’t remember much of it, much less be dying for more.

I hope I’m wrong.  The truth is, despite all of the CHANGES, Sony and Arcel crafted the film in such a way that future installments aren’t precluded from adhering closer to King’s original tale.  And, if this initial installment proves to be successful enough to warrant more journeys into this world, Sony might have the confidence to embrace more of the weirdness that comes along with the books.  And I hope that happens.  I hope people see the bigger picture and don’t punish Sony for making the movie that audiences have suggested they’d pay for through the use of their money, rather what audiences say they want through meaningless lip service.  If you’re upset by the CHANGES, then look in the mirror, because they’re our fault.  And if you want fewer CHANGES, you have to support those outside-the-box films (such as Valerian and the City of a Thousand Planets) with your paycheck, not with enthusiastic tweets that you never actually follow through on.

The movie is not in any way a disaster.  But it is distracted by trying to determine how to be too many things to too many people.  I’m afraid that the film will do mediocre business.  I’m afraid I’ll never get to see Susannah or Eddie or Oy or the Crimson King or Cuthbert or Alain or Susan Delgado or Blaine the Monorail on the big screen.  And I want to see them.  I want to see them very badly.  And I still think we could.  But if it never happens, we only have ourselves to blame.  We have forgotten the face of our father.