Directed by Cameron Crowe and released to much critical praise (including winning the Golden Globe for Best Picture – Comedy or Musical), Almost Famous is another example in a very long, sad line of examples in which a great movie of the precise type that people claim to love and want to see failed to succeed because those very people were all talk and bailed on the film when it was actually released.  I know a great many people who say they saw and loved this movie, yet look at the box office numbers above.  People love to make fun of a movie such as Batman v Superman: Dawn of Justice for “only” grossing $873 million on a $250 million budget, but that final figure is nearly a multiple of 3.5 times its budget.  That’s a success.  Whereas Almost Famous didn’t even gross enough worldwide to match its already-modest budget.

That’s a shame and the audience bears the blame for it.  Almost Famous is a fantastic film and deserved to be a financial success in addition to being a critical one.  Director and writer Cameron Crowe used his own experiences from earlier in his life as a columnist for Rolling Stone as inspiration for the film, which follows wannabe rock-and-roll writer Will Miller (Patrick Fugit) as he tags along with the band Stillwater, who is on the brink of superstardom.  Miller has an assignment from Rolling Stone for a 3,000-word article on the band, but nailing it down proves difficult as he gets caught up in the whirlwind of life with a rock band and consistently gets the blow off from guitarist Russell Hammond (Billy Crudup) for the interview that will serve as the lynchpin of the piece. 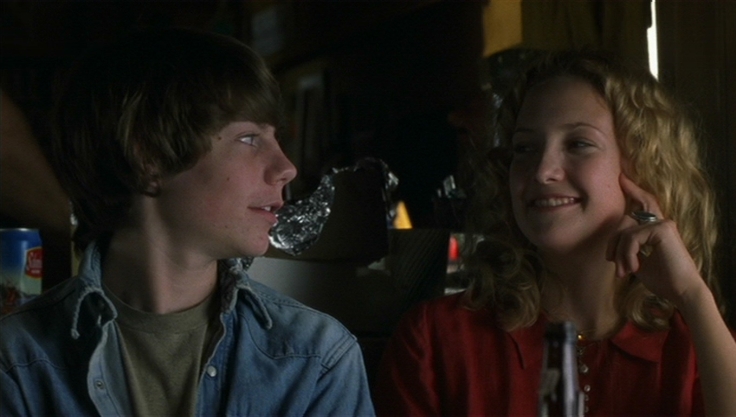 Complicating issues even further is the presence of a superfan who goes by the pseudonym “Penny Lane” (Kate Hudson).  Penny is infatuated with Russell while Will is infatuated with Penny.  Will gets increasingly involved in the personal issues of the band and must decide if it’s more important to be their friend or to be an honest journalist.

Almost Famous sports the shiny veneer of being a film about music, but the music is just one of the tools that Crowe uses to tell his story.  Here’s a secret: genre is an illusion.  Whether the topic of discussion is movies, music, books, or anything else, genre is essentially irrelevant.  Regarding film, whether the movie in question is classified as action, drama, romance, horror, or anything else, it always boils down to two components: story and character.  Any story can be told using any genre.  And this story is a coming of age tale for multiple characters – maybe even the majority of them.

Most of the characters are largely unlikable – especially those in the band.  This is by design, as Crowe aims to present them honestly.  They are selfish, insecure, and suffer from delusions of grandeur, as most bands do.  They truly believe that they’re changing the world through their music, yet when Will asks one of them why they love music, he can’t even answer the question.  He doesn’t know.  That’s because it’s not about the music.  It’s about the lifestyle.  It’s about the image.  It’s about the ego.  The only one of the whole bunch who truly loves music is Will.  His resistance to being seduced by the romantic nature of the industry is evident throughout the film, but he clings to his desire to be honest and true to his hopeful profession.  The band sees journalists as “the enemy” because of their honesty (an all-too-common platitude, these days), yet they bring Will into the fold, anyway, trusting that his youth and their charm will make him easy to manipulate.

Will is the youngest character in the film, but he is also the most mature.  As much as he initially experiences during his time with Stillwater, Penny, and their friends, he teaches them even more about themselves.  The film is almost a three-person show, with Fugit, Hudson, and Crudup taking the leads, but Frances McDormand, Jason Lee, Philip Seymour Hoffman, Anna Paquin, Zooey Deschanel, and Fairuza Balk all make their mark on the film, as well – with McDormand and Hoffman standing out, in particular.  The film mostly served as Kate Hudson’s coming-out party, though.  She used the role to launch a solid career for herself (though she never quite hit the heights I expected her to), while co-star Patrick Fugit was unable to similarly capitalize, despite doing well in the role of Will.

In the film, Jason Lee’s Jeff Bebe says that, with regards to music, “the popular stuff is usually the best stuff”.  That’s typically true in music (true, high-quality music speaks to people through its own merits, not through an associated image.  And you know it’s speaking to people when they respond by buying it.), but film is unfortunately a little different.  Films require more than someone liking it enough that they show it to a captive audience who is then forced to experience it, such as the way a disc jockey would play a song on the radio and grant it free exposure.  Movies require people to pay before they experience it.  And if there’s not enough money in the advertising budget to do that, many great movies can go without the support they deserve.  And that’s what happened to Almost Famous.  The award nominations should have gotten people to go see it, but general audiences still absurdly believe they know more about movies than critics, so they mostly ignore award nominations.  I hope that changes, one day.  But, until it does, you can still enjoy Almost Famous long after the fact, when it no longer does the film any good.