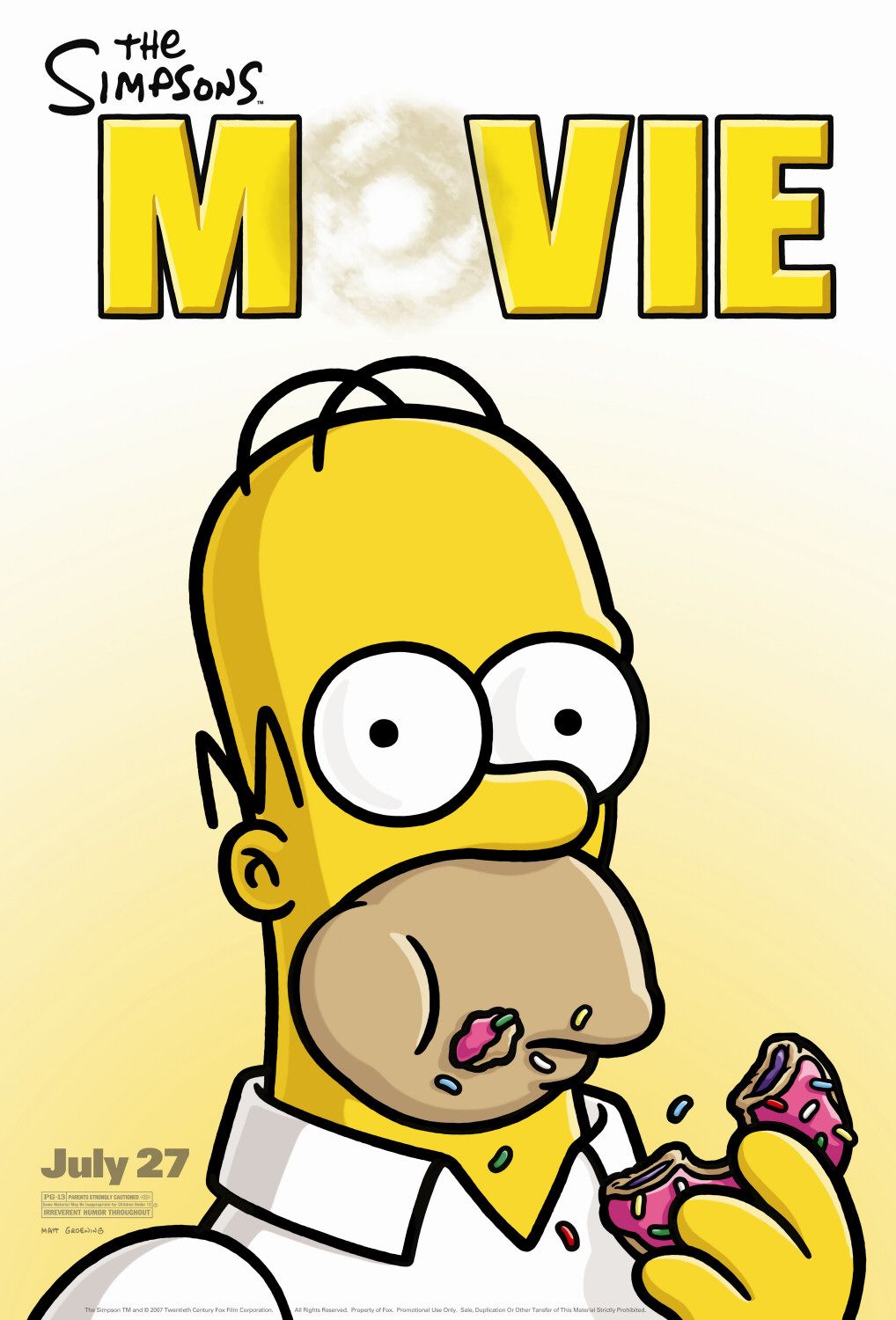 The Simpsons is my favorite television comedy of all-time (and my second-favorite television show, altogether, after Lost).  From day one, it’s been a sharp-tongued, envelope-pushing, quick-witted cornucopia of one-liners, sight-gags, satire, and the most memorable characters ever created and designed for in-home entertainment.  Matt Groening’s legendary creation paved the way for virtually every comedy we have on television (in all of its varied forms) today.  The Simpsons and their vast supporting cast are to modern television what Elvis Presley was to music.  So, it was inevitable that they would eventually make their way to the big screen.  And in 2007, twenty years after their debut as a short on The Tracy Ullman Show, they did just that.

Anytime a television show makes the jump to movie theaters, it has to be creatively justified.  It needs to simultaneously feel like the show that audiences have grown to love but also feel grander and worth the trip to the theater and the money that exposure to the product wouldn’t normally require.  It can be a tricky proposition.  The Simpsons Movie accomplishes this on every desired level, both aesthetically and creatively.

While there’s an obvious upgrade in the quality of art and animation, thanks to a higher, film-caliber budget, the video and audio upgrades don’t stop there.  The widescreen aspect ratio adds an extra level of panache and sense of importance.  Less obviously, the omnipresent score in the background contributes a subtle sense of scale and majesty, elevating the production far above its traditional television comedy origins.  Before the narrative even begins to unfold, this feels like the high-quality production that it is.

Yet, it’s still undeniably the Simpsons, with the classic 2D animation and character designs.  Fox and everyone working on the film justifiably felt confident in the property and didn’t make the mistake of using 3D CGI in an attempt to artificially inflate the perceived production values while abandoning the visual core and history of the show.  Other studios would have been tempted because, even in 2007, traditional, hand-drawn, 2D animation was on its way out and struggling at the box office.  It was the right – and only – choice for this film, however, so kudos to all involved in the production.

But what about the story?  Is this movie something that couldn’t be done on television?  Well, “couldn’t” is a strong word, but it would definitely be a tough task.  In the film, Homer inadvertently pollutes Springfield’s water supply.  In response, the (fictional) head of the Environmental Protection Agency, Russ Cargill (voiced by Albert “A.” Brooks) places an impenetrable dome around the town.  Thanks to Maggie, the Simpson family manages to escape the dome and, along with it, Homer’s role in the ordeal.  But that doesn’t stop Cargill from pursuing the Simpsons and developing some nefarious plans to deal with Springfield’s pollution issue.

On television (as established by South Park), The Simpsons has practically done it all.  Coming up with something new, fresh, and high-concept for the film, while not straying from the foundations that had been established in the twenty years prior, could not have been easy.  But this story takes the family and its supporting cast to new locations, puts them in unique situations, and – in true Simpsons form – plays with political and societal constructs through the use of cutting satire.  The film pokes fun at everything and everyone they can manage – including the audience, which hardcore fans are used to and also appreciative of.  If you aren’t in on the joke, then The Simpsons will go over your head.

Speaking of poking fun, the film is exceedingly funny and witty.  I regularly say that mileage varies when it comes to comedies, but, as always, The Simpsons provides intelligent, multilayered humor for informed, well-rounded, sophisticated adults.  There are definitely sight gags, but even the majority of those play out in an unpredictable manner that will tickle the funny bone of even the most stubborn critics of slapstick.  There are clever one-liners coming at a rapid-fire pace (the best line goes to Ralph Wiggum, with Ned Flanders not far behind) and the laughs never truly stop.  Everything lands to varying degrees and the script is an absolute goldmine of comedy that covers every different style for every unique audience member.

I have nothing bad at all to say about The Simpsons Movie.  It was a rare movie that was marketed as a comedy and fully delivered on its promise.  Two decades in the making, audiences turned out in masses, rewarding the film with over half-a-billion dollars in box office returns.  To further demonstrate the love and respect that the producers of the show and movie have for the property, there has been no sequel.  They have been quoted as saying that they don’t want to do one just for the sake of making money.  They want any hypothetical theatrical follow-up to deserve the screens that it will take up and be something worthy of the fans’ time and money.  If and when they feel inspired by an idea, we’ll get another movie.  It’s been ten years since this one arrived and reaffirmed the Simpsons as America’s family and one of the greatest institutions in pop culture history.  Sit back, enjoy Spider-Pig, and celebrate the tenth anniversary of this film along with me.  And just be thankful for the Simpsons and everything that they inspired in the decades since.