Based on Stephen King’s novella Rita Hayworth and the Shawshank Redemption, Frank Darabont’s more-succinctly titled The Shawshank Redemption is one of the most beloved films in all of cinematic history.  Released in 1994, and garnering a plethora of award nominations in 1995, over the decades, The Shawshank Redemption has garnered a reputation for being one of the greatest films ever made.  In fact, users of the Internet Movie Database have openly declared it as such, as it currently sits in the number one position of all films according to the user ratings on the enormously popular website.  And it has resided in that spot for a long time.  If only that enthusiasm had been there when the film was originally released; the movie was an unquestionable flop at the box office as moviegoers shied away from the low-budget, thinking-person’s drama with no special effects or (at the time) marquee stars.

The Shawshank Redemption follows two penitentiary inmates (Tim Robbins and Morgan Freeman) as they struggle with their imprisonment, their corrupt warden and guards, and their futures (or possible lack thereof).  Long before prison dramas were the cool thing, as they now are, largely thanks to Netflix’s excellent comedy-drama Orange is the New Black, Robbins’s Andy Dufresne and Freeman’s “Red” Redding redefined audience’s perspectives on life in the big house by reminding everyone on the outside that those on the inside are people, too. 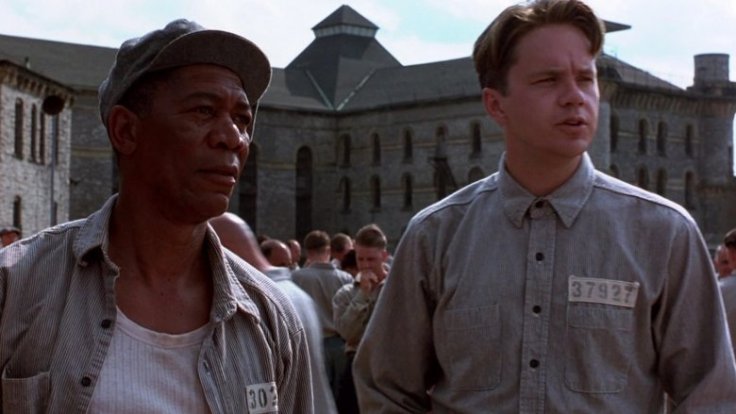 Those who aren’t among author Stephen King’s Constant Readers (and he has lovingly dubbed his loyal fans) are often under the misconception that King writes nothing but horror schlock with no redeeming social or literary value.  That’s as far from the truth as anything could possibly be.  All of King’s stories – even those that feature a strong horror component, such as It, Cell, or The Dark Half – are about the people first and the genre elements second.  But he has also been responsible for many non-horror stories, several of which have been adapted into very popular and beloved films.  Aside from The Shawshank Redemption, both The Green Mile and Stand By Me were originally Stephen King stories.  He’s a tremendous writer with a bottomless pit of imagination.

Helming the film was then-newcomer Frank Darabont.  The Shawshank Redemption was Darabont’s first feature film as a director.  Believe it or not, he’s only directed three films since then, and two of them were also Stephen King adaptations (The Green Mile and The Mist).  He has since also developed a little property called The Walking Dead for television, though he left the show shortly after its debut.  Led by Freeman and Robbins, the cast of The Shawshank Redemption was comprised of respected actors who were fairly well-known and recognizable but lacked true superstar status.  While this was likely because of the film’s modest budget, it also helps keep the viewer invested in the fictional characters instead of on the reputations of the actors involved.

I like doing these classic films for my #ThrowbackThursday columns but sometimes it can be difficult.  Honestly, what more can I say about The Shawshank Redemption that hasn’t already been said a million other times by a million other people?  This film marks one of those somewhat rare instances where audiences and critics agree: the movie is brilliant.  Everything hits exactly as it should.  Even though the film is relatively long at two hours and twenty-two minutes (counting credits), the script and the performances keep it engaging, never allowing it to drag.  The characters are relatable, believable, and unique unto themselves.  Their arcs play out organically and each character serves a purpose for both the larger narrative and the stories of the two primary leads.

What really hits home is how the themes of the film and the struggles of the characters can be metaphorically applied to virtually anyone.  But few would ever think to apply such ideas to people who have been locked away for years – maybe even decades.  And, often, when considering criminals, those internal struggles can be exacerbated exponentially due to their particular circumstances.  For instance, the very notion of institutionalization would typically be beyond the reach of anyone who has never been incarcerated, but King and Darabont explain it in a way that is not only both beautiful and heartbreaking but also effortlessly accessible.  We see each character wrestling with their own problems and, though we know that most of these men got themselves into the position in which they reside, we also come to understand that people can grow and change.  And maybe some of them deserve another chance at a real life.  But that’s not always as easy as it sounds.

This story could not be told for general audiences by anyone who isn’t a master storyteller.  I’m not going to go on and on about the film.  If you’ve seen it, you know.  If you haven’t, you should.  It lives up to its reputation.  The Shawshank Redemption is a poignant and poetic story about the strength of the human spirit and the unexpected weaknesses to which it may also succumb.  Though we are often unable to control the events of our own lives, we can still control how we process them and what we do with them in our hearts and in our minds.  And if we are able to maintain and come out standing at the end, we all get our ultimate redemption.