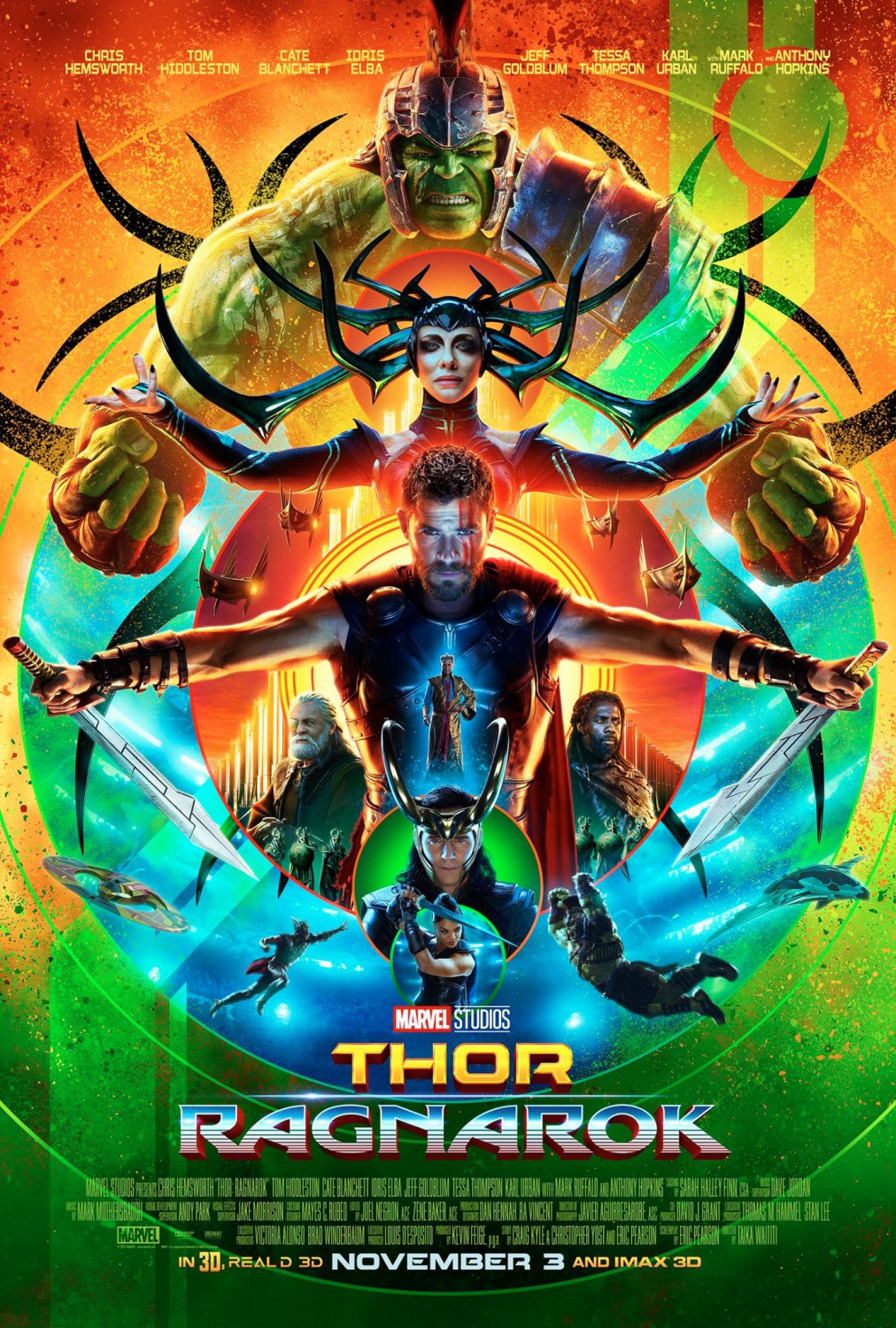 Here we are!  If you know me at all on a personal level, you know that the Hulk is my favorite fictional character of all-time (I like him better than most real people), so Thor: Ragnarok has been my most-anticipated movie of the entire year, without question.  A combination of the comics’ popular “Ragnarok” Thor story (or a very loose interpretation of it) and the “Planet Hulk” Hulk story, Thor: Ragnarok barrels into theaters and hopes to help make 2017 one of Marvel Studios’s best years creatively, if not also financially.  Both Guardians of the Galaxy Vol. 2 and Spider-Man: Homecoming were huge home runs, bringing the fun and absurdity of the Marvel Universe to audiences in the crowd-pleasing way that Marvel Studios has absolutely mastered.  The trailers for Thor: Ragnarok have been off-the-charts in terms of action, humor, character, and spectacle.  Obviously, no domestic box office numbers have been released as of this writing (because there are none), but I expect this one to blow away all expectations.

Director Taika Waititi caught my attention with his fantastic independent 2016 Sam Neill comedy Hunt for the Wilderpeople (do yourself a huge favor and seek that one out).  It was obvious after that film that Waititi has a strong grasp of character, dialogue, relationships, and humor.  That made him a perfect choice to helm Ragnarok.  All of that makes the jump to his first foray into big-budget studio filmmaking without a hitch.  As has been made obvious by the marketing, Ragnarok offers up a huge tonal shift when compared to Thor and The Dark World by adding so much comedy that the film can rightfully be advertised as an action-comedy, rather than an action movie with some comedy thrown in.  At least ninety percent of said comedy lands and the cast is clearly having fun with this opportunity to show a different side of themselves.  There are people out there who will actually whine about the movie being funny, but for those of us who don’t hate smiling and laughing, it’s a great thing. 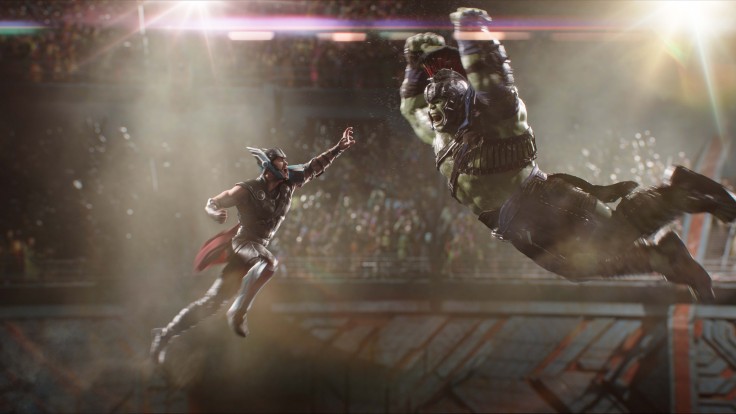 Speaking of the cast, scroll up to the poster and take in the names that are listed at the top.  Go ahead, I’ll wait.  Are you back?  Now . . . isn’t that insane?  Marvel attracts names like that by offering up compelling characters and sharp, juicy dialogue.  Ragnarok is among their best in those areas.  Every one of those names from the top of the poster delivers and helps to make their respective character memorable and likable.  The script gives them an excellent foundation; each character has an arc and at least one big moment to shine, whether it be physical, emotional, or some of both.

And I can’t get over those characters.  I love them all – new and old.  Thor (Chris Hemsworth) continues to mature and grow into his position.  Hulk (Mark Ruffalo) is the closest to the classic comic book version we’ve seen, yet.  It’s time for him to have another standalone film, so Marvel and Universal need to work out their differences (and give us Eliza Dushku as She-Hulk) ASAP.  Hulk also has comic book ties to many of the characters in this film which makes his inclusion even more sensible.  Loki is as mischievous – and complex – as ever.  Valkyrie (Tessa Thompson) is different from her comic book counterpart, but charismatic and scene-stealing.  Hela is righteous and frightening (and I adore Cate Blanchett in the role.  She’s now in the running for my favorite Marvel Cinematic Universe villain.).  Heimdall (Idris Elba) finally establishes his own identity.  The Grandmaster (Jeff Goldblum) is as slimy and endearing as the slimiest fight promoter on Sakaar or any other planet.  Skurge the Executioner (Karl Urban) is more layered in this film than he’s ever been in the comics.  Plus, there’s Korg, Miek, Fenris, and you’ll never forget Surtur!  Quite simply, this film’s Cool Factor is off the charts and rates at least a 9.8/10 on the AB- (Atomic Blonde) Scale.

That Cool Factor is significantly amplified by Marvel and Waititi’s willingness to just let loose with the craziness.  Honestly, that’s been my favorite aspect of the recent films from both the MCU and the DC Extended Universe.  Forget about keeping these films “grounded”.  Very few people want that.  Just go nuts.  That’s exactly what Waititi does, here, and it’s glorious.  Hulk throws tantrums.  Hela and Loki both get their wicked headgear.  Fenris and Surtur . . . well, they exist!  The Grandmaster is deliciously eccentric.  And none of this is watered down by needless explanation or justification.  “There are other worlds than these,” says Stephen King and the MCU is one of those other worlds.  Their rules are not ours and you will either accept that or you will pull your pants up, neglect pooping on our party, and go home.

Movies are almost guaranteed to make a profit when they succeed in three areas: people are aware of them, people want the movie to be made, and the movie is good.  Ragnarok triumphs in all three of these areas.  A few people with agendas who decided to hate the film before they even saw it (which they may or may not actually do) will try to tear it down.  But the truth is that the movie is action-packed, offers plenty of new material that’s never been done on film, is funny, provides forward momentum for the characters and the MCU, and (perhaps most importantly) is accessible to viewers of any MCU experience level.  There are references and callbacks to what has come before, but no previous knowledge is resolutely necessary in order to follow the primary narrative or character arcs. 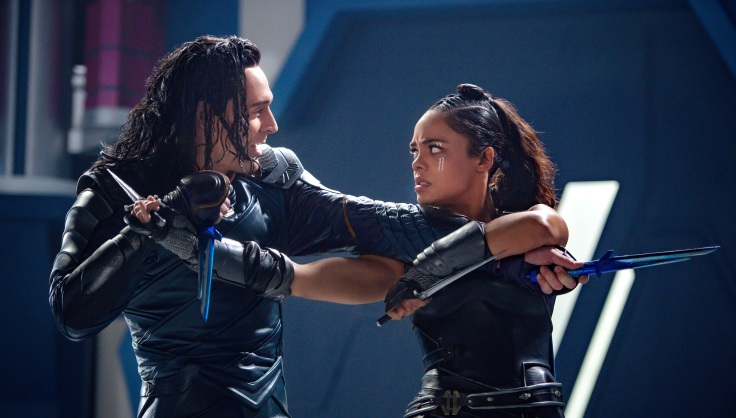 The bottom line is that Thor: Ragnarok gifts audiences with everything they have come to expect and/or desire from a huge, escapist, tentpole studio offering, and then somehow manages to over-deliver.  Don’t hesitate.  Thor: Ragnarok is worthy, indeed.