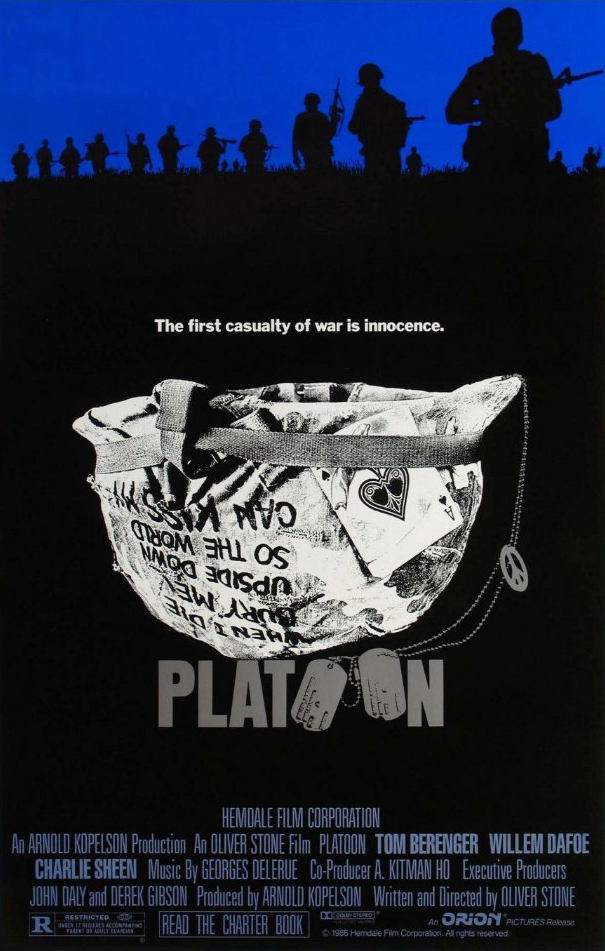 #ThrowbackThursday returns with the second Oliver Stone film in the last three weeks, with Born on the Fourth of July being the first, two weeks ago.  Much like that film, Platoon is also set against the backdrop of the Vietnam War.  However, where Born on the Fourth of July addressed the effects that the war had on its veterans in the aftermath of the conflict, Platoon takes place entirely during the combat, tackling the experience that the soldiers had to survive in order to get back home to the United States.  What results is a complex, sometimes uneven, always disturbing look at the horrors and controversies of the Vietnam War.

Told from the perspective of Charlie Sheen’s recruit Chris Taylor, the film follows Taylor and the rest of his platoon as they fight for survival in the jungles of 1967 Vietnam.  This probably isn’t going to be a popular or well-received observation, but Sheen actually does a nice job in the role.  It’s his responsibility to guide the viewer through this harrowing journey and he does an admirable job in presenting himself as relatable and sympathetic.  This is in spite of the fact that Chris is the only one of the bunch (of which we are aware) who is there by choice, having volunteered to fight after growing up immersed in a privileged lifestyle.

Outside of Sheen, only Willem Dafoe and Tom Berenger truly stand out among the cast (at least for positive reasons).  Both of them display range and nuance in their performances that each garnered both of them many award nominations during the early-1987 awards season, and deservingly so – particularly for Dafoe.  The others are all relegated to Donald Trump-esque “locker room behavior” that does nothing to endear them to audiences.  Most of them do fine with their parts (though said roles are hardly challenging), with the exception of John C. McGinley.  McGinley may well be a very fine gentleman and I mean no personal offense but he has managed to craft an entire career for himself based solely on his unique face.  His performance in this film is no exception as he constantly waffles between overacting (anytime he speaks) and not acting at all (when he’s tasked with physically emoting).

The rest of the issues with the performances can likely be laid at the feet of Stone’s script, as he asks nothing of them aside from the previously referenced alpha male trumpeting.  I’m not so naïve nor egotistical as to imagine that this was lost on Stone; the only question is why he chose to present these characters in this way.  It may be for realism.  It may be to make a statement about the American government’s attitude towards the war at that time.  Or it may even be a reference towards the American people’s overzealousness towards applying military force to settle disputes.  Choose your favorite.  Regardless, it creates a divide between the majority of the cast and the typical moviegoer who wants someone to root for.  But that may have been the goal as Stone’s writing and directing makes it very clear that there is almost nothing and no one to be proud of in this scenario.  The American soldiers are cruel towards Vietnamese citizens, children, and even animals, taking pleasure in their destructive actions.  Only Dafoe’s Sergeant Elias approximates heroism in the face of daily death, making him the film’s lone anchor for the audience.

Once the horror and tragedy begins to unfold in earnest, it’s still easy to feel for the characters in spite of their flaws, but mostly in the broader sense in which one cares for humanity in general, rather than the more personal sort of caring in which the viewer is invested in each character’s individual plight.  It’s also obvious that these people are being partially shaped by their wartime experiences, and that helps their cause, but most of them still aren’t resistant to their darker natures taking over.  If Doctor Jekyll welcomes Mister Hyde, why care about either?

Clearly an antiwar film, while aesthetically and cosmetically appealing and excellently staged (featuring plenty of wartime action), Platoon never quite ventures into the territory of glorifying war, even if most of the characters seem a little too happy to be there.  But, for me, where the story structure falters is in its lack of a narrative hook.  All too often, films will have no central focus – no goal in sight for the characters or the audience, leaving the viewer wondering what the ultimate destination is supposed to be.  What essentially results from this omission is the total elimination of a beginning, middle, and end to the story.  Instead, the story starts, meanders around without any direction or natural crescendo, and then eventually just concludes.

This is something that has always bothered me in film and Platoon shares this dubious distinction with another highly-regarded war film in Kathryn Bigelow’s The Hurt Locker.  I wasn’t crazy about that film for this very reason.  On the other hand, both films won Best Picture at the Oscars, so maybe I’m the only one who cares about that sort of thing.  I’m not about to say that a compelling film can’t be made without that standard format in tact, but I will maintain that it’s sufficiently more difficult to do so.

I’m of two minds about Platoon.  Stone’s message isn’t quite as clear as in Born on the Fourth of July and I found it somewhat difficult to become invested in the characters as presented.  Still, there are some solid performances, excellent set pieces, and the torture of the Vietnam War is easy to comprehend even to those with their heads firmly buried in the sand.  This is the story of soldiers who only wish to fight for their country, but have no idea who they are actually fighting or what they are fighting for.  This is the story of the dangers of nationalism over patriotism.  Platoon isn’t my favorite war movie, and it may have some structural and character issues, but the film has its value and I would recommend a watch for anyone who hasn’t seen it.