When I was in ninth grade, I took a Biology class.  I was one of only a couple of freshmen in the class, as it was considered a sophomore course and most freshmen took Earth Science.  I expected my classmates to be of a more mature and respectable nature than most of my fellow freshmen.  Our teacher was an affable guy.  A little goofy, but nice, well-meaning, and good at his job.  One day, someone came to the door and asked him to step into the hall for an irrelevant reason still unknown to me.  While he was out of the room, one of the upperclassmen ran up to the board, grabbed the chalk and, on the board, wrote something very profane and insulting about our teacher.  When he came back into the room and saw it, the look on his face was so full of hurt that I still get sad thinking about it, to this day.  He proceeded to leave the comment up on the board for the rest of the class, writing around it without any sort of verbal or physical acknowledgement . . . except for the look on his face.  I wish I could say that I stood up to that upperclassman man-child in the making – that I put him in his place – that I let our teacher know he wasn’t alone in the room on that day.  I didn’t.  I was a freshman and I was intimidated.  But I never forgot that moment.

Kids can be so mean.

Then there was one time I was at a WWE Raw in Charlotte, North Carolina.  My friend and I were in the third row.  Next to me was a man who was there with a mentally handicapped child.  Behind us was a mother with her son who was approximately seven or eight years of age.  We had chatted a bit, and he was a sweet kid.  It was his first time at a WWE event.  This man next to me was a huge fan of a wrestler named Santino Marella – a silly, lower-card comedy act.  But when Santino came out, this guy wouldn’t sit down, even after the bell to begin the match rang.  The kid behind us couldn’t see.  He politely tapped the man on the back and asked him to sit down.  The man ignored him.  The mother then also politely asked.  The man turned around and said (and this is an exact quote), “Shut up, bitch.”  The boy tapped him one more time.  The man turned around and piefaced this little kid, shoving him back down into his seat.  Unlike when I was a freshman, I didn’t let that one go.  I made sure that kid and his mother knew they weren’t alone in that arena of 16,000 people.  But that’s not the point of the story.

Adults can be so mean.

Stephen Chbowsky’s Wonder is the movie of the moment.  It’s outperforming all expectations and now I understand why.  For those who are unfamiliar, the film is an adaptation of R. J. Palacio’s novel of the same name in which ten-year-old August “Auggie” Pullman (Jacob Tremblay) makes his first leap into public school after a lifetime of being homeschooled by his mother due to being born with severe facial deformities.

I’m going to spend exactly one paragraph talking about Wonder from an objective filmmaking perspective.  The cast is fantastic.  Tremblay soars, just as he did in the outstanding Room from two years ago.  The rest of the cast aren’t challenged as much, playing mostly within their comfort zones, but they play their roles perfectly.  The movie is funnier than I expected and the story is more than sufficient, if a little clichéd and predictable.  The dialogue is sharp and attention-grabbing, though occasionally comes off as slightly unrealistic when the younger children are interacting with one another.  There are some issues with focus, caused by some interesting but questionable structural choices, but the narrative does a good job of communicating the entire story.  After all, there are always two sides.

So, technically speaking, from a purely critical viewpoint, Wonder is a very good film, though maybe not quite great.  But, as I’ve said many, many times, filmmaking is art.  And the entire purpose of art is to make the beholder of it think and/or feel.  And on that level, Wonder is unmatched.  This is the rare sort of film that transcends silly little critiques of structure or of brief moments of unnatural dialogue.  Because, while watching this film, I never stopped feeling.  There are many films that have powerful, moving moments when a character finally finds the hero within themselves during the climax, sending the audience home with the renewed belief that “maybe the world isn’t so bad, after all”.  Wonder has one of those moments approximately every five to ten minutes.

That’s the effect that Auggie has on those around him.  And that’s the effect Auggie is having on audiences around the country.  At first glance, on the surface, this is a film about love, kindness and bravery.  But Wonder takes it a step further.  It’s not only about love, kindness, and bravery; it demonstrates how to love, be kind, and be brave. 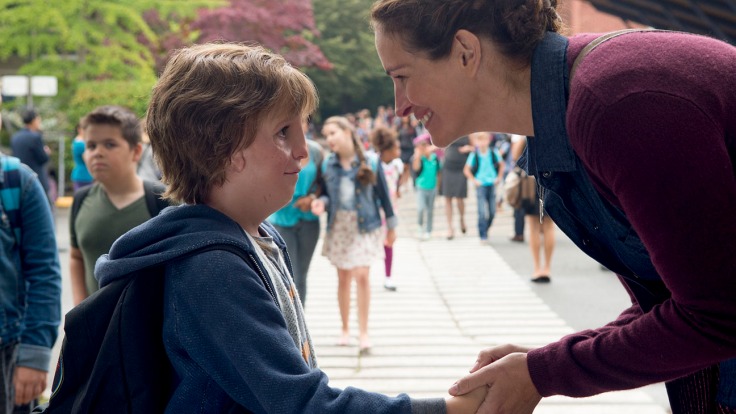 As with the real world, there are good and bad people in the film.  But, in the face of everything we see on the news and in the streets and, yes, in the schools these days, Wonder chooses to believe in the good.  Auggie’s family (played by Julia Roberts, Owen Wilson, and Izabela Vidovic) are flawed but genuine people who sincerely love one another and who each do the best they can to help and support the others, even when it causes their own lives to be more difficult.  This love infects the people around them, breeding more love and making their immediate world a better place.  There is much to be learned from their example, not the least of which is that giving up on the good in the world is the quickest way to ensure it’s expulsion.

Some will say the film panders.  Some will say it takes the easy road.  I say that love is never the easy road.  I have been disappointed by so many people in my life that I rarely let anyone new in.  I very much appreciate the few who have never let me down and who have chosen to let me in.  This movie made me appreciate them more.  And there are people who aren’t around in my life, right now, for any number of reasons, who I miss terribly.  This movie made me miss them more.  So, maybe it panders.  But it won me over, and that’s all I really care about.  Shame on me for getting behind a film that rightly declares that we should all treat one another with care and respect.  Perhaps I’m a sap.  Perhaps I’m a “snowflake”.  But Wonder is easily one of my favorite films of the year, despite its minor-to-moderate flaws.  Sometimes it’s not all about technical or artistic achievement.  Sometimes it’s about reaching people in the right way at the right time, and that’s what Wonder does.  So, maybe I let my humanity supersede my objectivity.  I’m okay with that.  To those who aren’t, all I can think to say is . . . snowflake and proud, a-holes.