Released in time for Halloween in 2001, Thir13en Ghosts was, at that time, the latest in a string of horror films in the late-nineties and early-naughts (or “noughties” as I like to call them) capitalizing on a craze that was spawned by 1996’s Scream and then fully ignited by 1999’s The Blair Witch Project.  Studios had caught on to the fact that horror movies were by-and-large cheap and popular – an excellent combination for anyone looking to offset the risks of more expensive projects.  If executed correctly, horror movies are as close to a sure thing as exists in Hollywood and they continue to populate cinemas today, if not quite with the frequency that they did at that time.

Feeling confident in the genre, Warner Brothers developed Thir13en Ghosts (Agh!  It hurts just to type that!), a remake of the 1960 film 13 Ghosts (much better) by prolific horror director of the fifties and sixties, William Castle.  (Another of my #ThrowbackThursday columns focused on a remake of one of his other films, and you can find that here.)  Warner Brothers handed the reigns of this remake to director Steve Beck, who was not prolific in horror films, as Castle was, but was instead a prolific commercial director.  There’s nothing wrong with that, per se, as many directors have made that transition, but it was very obvious that Beck had trouble getting commercials out of his system as Thir13en Ghosts seems to constantly go overboard as if it’s trying to sell us a story instead of tell us a story. 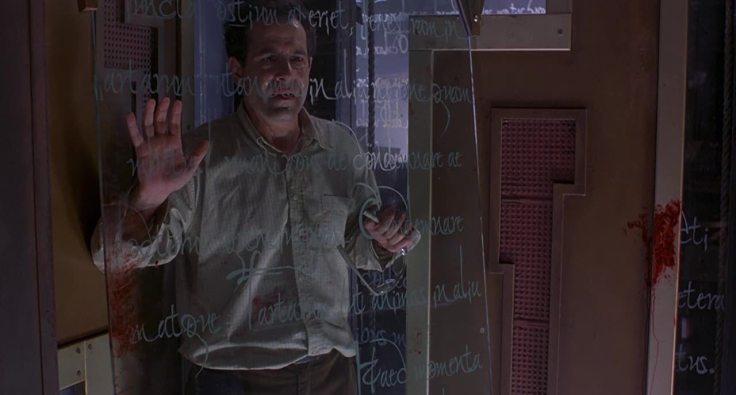 Here’s the premise: eccentric millionaire Cyrus Kriticos (F. Murray Abraham) dies and leaves his entire estate to his nephew Arthur (Tony Shalhoub) and Arthur’s children Kathy and Bobby (Shannon Elizabeth and Alec Roberts).  What Arthur, Kathy, and Bobby don’t know is that dear old Uncle Cyrus has a collection of angry and vengeful spirits locked up in the basement, just waiting for their chance to get free and exact revenge for their imprisonment.

The premise itself is fine, and different from what viewers typically see in a horror film.  But director Beck has trouble reining himself in.  The film is absurdly loud, brash, and over-the-top . . . just like a commercial.  One of the keys to effective horror is restraint.  Revealing too much too soon quashes any semblance of suspense, and suspense is the foundation of great horror.  Not only that, but the movie is so cacophonous that the suspense couldn’t build even if the pacing were to allow it.  The movie plays as much like an action film as a horror film, if not more so.

A great horror film should put the audience in the shoes of the sympathetic protagonist(s) so that the viewer feels as if the on-screen terror is happening to them.  Think back to the times you’ve been frightened at night.  How often is it loud and how often is it quiet?  The absence of sound is itself frightening.  Thir13en Ghosts is an assault on the two senses that are used to watch film and it’s counterproductive to the perceived goals of any horror film.

I wish the advertising approach to Beck’s filmmaking stopped there, but it continues.  Beck assembles a capable cast, but he directs them to oversell everything (although that’s par for the course for Matthew Lillard) as if he expects so little of his audience that he doesn’t believe they can follow subtlety.  The most casual lines of dialogue are practically shouted.  Every physical movement is an unnecessarily wild gesticulation.  Even the newspaper headline announcing the death of poor Uncle Cyrus is punctuated with an exclamation mark, which is simply ridiculous.  And the script is full of unnatural conversation that doesn’t sound like any actual people I’ve encountered throughout my lifetime.  It’s stilted, it’s awkward, and it’s disingenuous.  I’m not asking for Tarantino-esque wit and charm, but at least give your actors a chance to portray characters who approximate real people, thereby giving your audience a chance to empathize with them and subsequently fear for them. 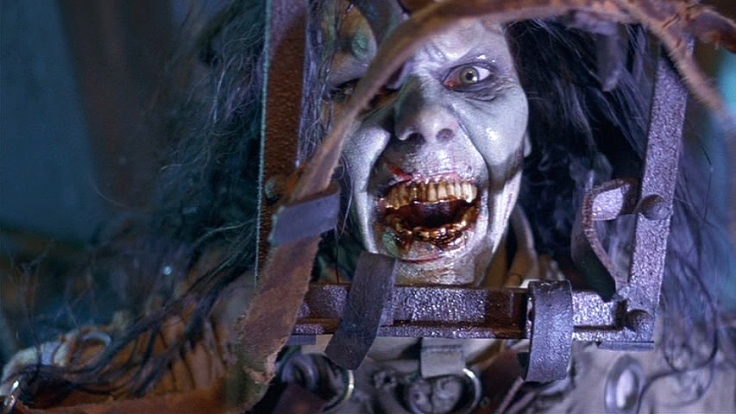 If that’s not bad enough, the story gets bogged down in too much side-questing, forgetting why the audience is there to begin with.  There are crazy contraptions, giant machines, shifting hallways, magical spells and it’s just too much.  Most of it exists solely to explain away the ghosts and their predicament, and that leads to another issue where the spirits are presented as victims and it’s therefore relatively easy to feel sympathy for them.  As I said, it’s just too much.  Horror should be kept as simple as possible.  Character complexity is always desired (see films such as The Conjuring and its excellent sequel) but narrative complexity should be handled delicately with the eye never taken away from the goal of establishing clear-cut admirable heroes and terrifying villains (such as my personal favorite horror movie of all-time).

In spite of its flaws due to being mishandled by an inexperienced director who wasn’t ready for this sort of project, Thir13en Ghosts is still entertaining at times and a pretty easy watch.  It doesn’t hurt that the film clocks in at a brisk 91 minutes.  But the movie is in no way “good”, with the exception of the work by the entire production team who made the film look great.  But is that enough?  If you like anything horror or if you (still?) have a thing for Shannon Elizabeth, then maybe.  Otherwise, you may find yourself constantly shouting things like, “What?” or, “Why?” or, “Huh?” or any other number of monosyllabic vocal exclamations.  Ultimately, the film has a charm or two, but there are many better options out there for those who are looking for a fun fright night at home.