Earlier this year, I went with my sister and brother-in-law to take my nieces to see the Ringling Brothers and Barnum and Bailey Circus as it made its final rounds throughout America.  A longstanding tradition dating back to the year 1919 (formally, but initiated long before that in the mid-1800s), much had changed for the show throughout the decades and particularly in recent years.  Animal rights activists had challenged the production’s treatment of some of its star attractions (especially elephants), necessitating their removal from the show amidst bad press.  It was the final blow to the declining business and the self-proclaimed Greatest Show on Earth shut down for good.

Still, you’ve got to hand it to a business that stays running for essentially well over a century.  It’s not easy (as Bitcoin is discovering).  The Greatest Showman follows the genesis of the circus under the guiding hand of world-famous promoter P. T. Barnum (Hugh Jackman).  Directed by Michael Gracey in his feature film directorial debut, the film eschews biopic convention and takes a musical approach.  If one thinks about it, that’s actually a fairly obvious choice as a film about the man who dreamt up the circus should in itself be a spectacle. 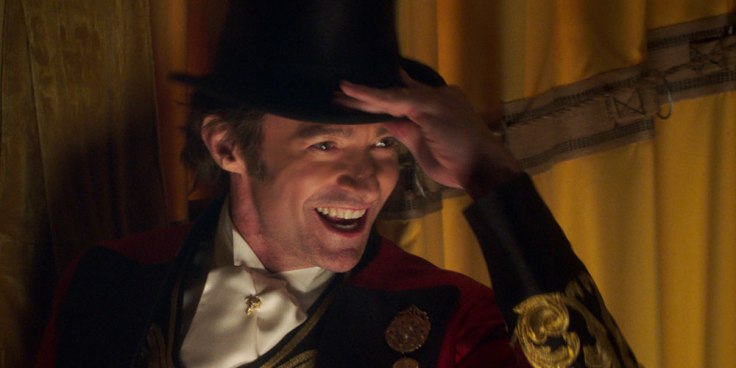 And a spectacle it is.  The film opens with a pulse-pounding musical number sure to get the blood pumping and the proceedings are then successfully off to a rousing start.  The music for the film borrows a couple of the composers/lyricists that wrote for La La Land.  That doesn’t hurt matters as each musical production is bombastic, energetic, and powerful.  Hugh Jackman does a predictably excellent job as Barnum, whether it be during the standard dialogue scenes or the singing and dancing scenes.  His versatility continues to serve his career well, as he has managed to escape being pigeonholed into only roles that approximate Wolverine.  It’s evident through his performance that he’s having a good time and that’s always nice to see as a viewer.

Speaking of La La Land, the film seems to have high hopes of being this season’s version of that film.  It’s unfortunately not going to happen, however.  La La Land benefited from a visionary writer-director in Damien Chazelle who has a refined ability for communicating his stories by utilizing his own unique and finely tuned delivery methods.  Gracey does fine, but his inexperience does show.  Mostly it’s only because of his conventional framing and editing, but there were also a couple of shots within the film where I actually wasn’t sure where I was supposed to be looking.  He’ll get better with opportunity.  But the film isn’t going to be getting a deluge of award nominations (in spite of its rather surprising Best Picture nomination at the Golden Globes), although the studio was clearly hopeful, seeing as how they released the film in December instead of waiting for the less-crowded January.

Also, despite the songs being catchy and completely immersive, they aren’t particularly memorable or moving.  The goal here mostly seems to be to have fun.  And that goal is achieved.  But if large piles of awards are to be garnered, fun isn’t enough.  There is one exception: when Rebecca Ferguson’s Jenny Lind takes the stage for her first musical number in the film, “Never Enough”, the whole world stops.  It’s a breathtaking performance, an emotional song, and easily the highlight of the film.  The song is unquestionably Oscar worthy, but there’s one problem: Rebecca Ferguson didn’t actually sing it.  The vocals are actually performed by Loren Allred, a former contestant on NBC’s “The Voice”.  She monumentally knocks it out of the park (and completely blew me away if I can speak for myself for a moment) but I wonder if the fact that the vocals aren’t Ferguson’s will hurt the song’s chances for an award.  I would hope not, as no one from the film is trying to hoodwink anyone.  A great song is a great song and a great performance is a great performance.  I hope to see it nominated, early in 2018.

I hesitate to say that the film has any major “problems”, as I don’t feel that it truly does, other than what I’ve already outlined.  But, as I suggested above, where the film truly falls short is – aside from the performance of “Never Enough” – a lack of memorable or defining characteristics.  It’s all safe and by the book.  It was nice to see both Zac Efron and the great Michelle Williams in roles outside of their typical fare (Williams almost exclusively seeks out the most depressing pictures she can find and Efron has excelled at playing the muscle-bound meathead).  They both do fine jobs, as does Zendaya who gets a little more meat to chew on than I expected.  The supporting cast of Barnum’s oddities are solid, as well, but nobody is truly pushed to do anything special.

The narrative is the same.  It hits all of the markers, consistently punctuated by ear-pleasing songs, but there’s nothing that audiences haven’t seen before and nothing that will take them by surprise.  This film is the Bizarro mother!: it’s enjoyable to watch but you’ll most likely never think about it, again.

So, yes, I liked The Greatest Showman.  And if you want to see it, I would hurry as it’s underperforming, a bit, and there are lots of new releases coming (I would even go so far as to state that “Never Enough” is worth the price of admission, on its own).  Maybe business will pick up for it, a bit, once the holidays are over, but that’s no guarantee.  Yet, while I enjoyed it, there are more rewarding filmgoing experiences out there, right now, whether it be on a pure entertainment level (Jumanji: Welcome to the Jungle) or a deeper, transformative level (Three Billboards outside Ebbing, Missouri).  There’s so much to choose from at the moment and I can’t honestly suggest making The Greatest Showman your first choice.  But it’s still a solid option, once you get the others out of the way.