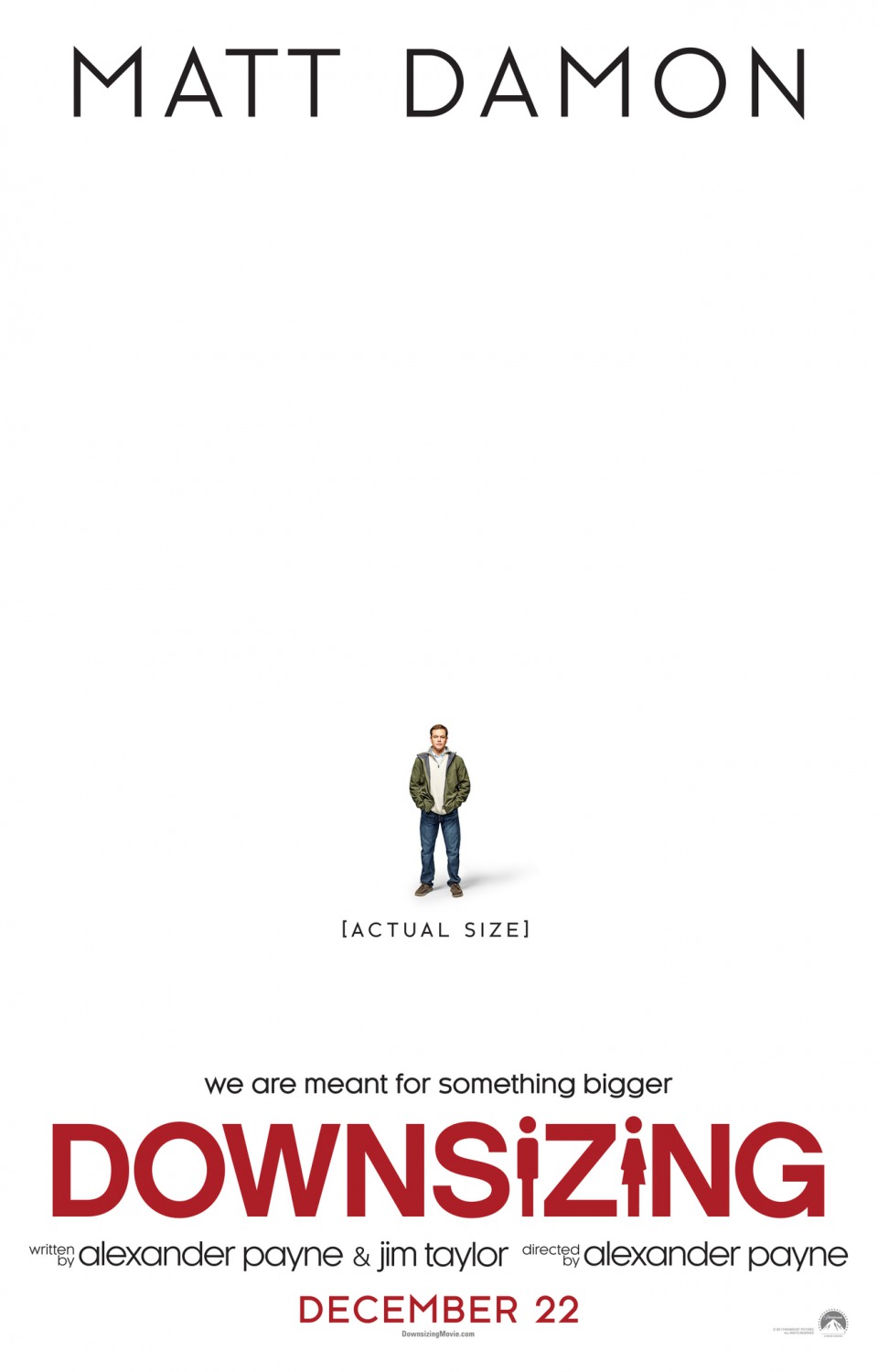 Alexander Payne’s Downsizing made the list in my Ten Fourth-Quarter 2017 Films to be Excited About! column and it’s taken me longer to see it than I would like, but here we are.  Payne won me over with his excellent 2011 film The Descendants, starring George Clooney, Vera Farmiga, and Shailene Woodley.  Two years later, he returned with the also-excellent Nebraska, and now he’s back again with this much higher-concept (as well as higher-profile) film in which people voluntarily shrink themselves in order to simplify and improve their lifestyles.

Matt Damon and Kristen Wiig play Paul and Audrey Safranek.  Paul and Audrey have been struggling to make ends meet and decide that their situation could be improved by volunteering for the downsizing process, which had been made for mass market use in the years prior.  The Safraneks naturally discover that if something is too good to be true, it probably is, as the disadvantages of the aftermath of the process rear their heads and prove that life is complicated no matter what and that, truly, (say it with me) size doesn’t matter. 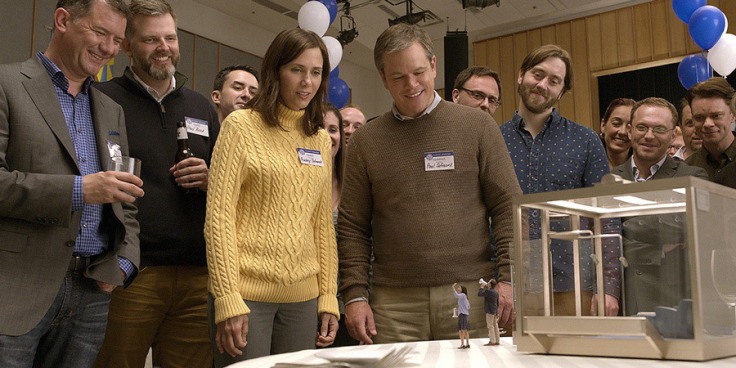 However, the film is actually about much more than just that idea.  The entire downsizing process is developed as a way to curb the long-term effects of overpopulation on both the planet and humanity.  The benefits of downsizing to one’s personal life are presented as what will presumably be considered nothing more than fortuitous side effects.  Scientists believe that people will want to downsize in order to save the species and the planet.  Of course, that’s not the case, at all.

Payne crafts his story to make the point that people are always people and that, as a species, we seem unable to learn from our past mistakes.  “If something I do helps others, great.  But what’s most important is what it does for me.”  All it takes is a couple of seconds on Facebook (or at least my Facebook) to see that this way of thinking is perhaps more prevalent than it has ever been before.  People say they want better for others who are less fortunate (in whatever way – socially, culturally, financially, etc.) , but only if they aren’t required to make even the slightest compromise to help it come about.

Paul straddles the fence between these two ideals.  He unquestionably initially chooses to downsize at the insistence of his wife Audrey for their own personal benefit, but he also sees the larger potential his choice has to do some good outside of his own individual bubble.  Ultimately, this is the question that Downsizing poses to audiences: can we do more good by primarily keeping our focus more small-scale – i.e. on ourselves – or by looking at the bigger picture – helping others above all else?

That’s actually a complicated question and Downsizing is a similarly complex film.  So often, people tend to take these nuanced, multilayered concepts and argue them from only one extreme without considering all of the angles (heck, for a good example, just look at all of the hubbub surrounding star Matt Damon, right now).  Payne offers up a very thorough analysis of this particular conundrum and truly gives the audience something to think about (should they choose to, of course, which is always a crap shoot).  In fact, his stance is so well-balanced that I was even confused as to what the message of the film is intended to be until the final few moments of the movie.  Payne addresses some delicate, but important, topics and handles it all with grace and tenderness.

On the surface, the film is equally complex and Payne is also equally thorough.  There are untold consequences of a procedure such as downsizing that one would not necessarily stop to ponder, but Payne includes the most prominent, whether they be big or small.  This sometimes requires him to be woefully pessimistic, but such is the life of a screenwriter-director who wishes to hold a mirror up to humanity.  The truth is that humans will always find a way to take something that should be universally good and beneficial and twist it into something nefarious.  It’s a regretful cycle and Payne uses the scientific procedure and its fallout to remind the viewer of that.

Despite all of this apparent doom and gloom, the film has a sense of humor.  It’s been largely marketed as a comedy, and even if the film has a lighter tone, I think that’s a misfire.  Still, there are moments of humor that permeate the film and – though it takes a while to get to her – Hong Chau steals the entire film as Ngoc Lan Tran.  (She gets the funniest moment, too.  You’ll completely forget about George Carlin’s list of seven words you can’t say on television in favor of her list of eight . . ..  Well, I don’t want to give it away.)  Tran pops up from the least-likely position to become the film’s most memorable (and likable) character and one of 2017’s, as well.

The film is about thirty minutes too long.  Narratively, not much happens and the film not only takes too long to get to the point but frankly does a poor job of building to said point.  And that message message – though eventually revealed – is probably not decisive enough for some people and likely still too muddied for others.  So, it’s not a perfect film.  Despite those shortcomings (heh), it’s mostly entertaining and chases some evocative ideas that will get more cerebral viewers talking and debating at their post-movie dinner.  I can understand if some are frustrated by the film’s denouement, but, again, the point of Payne’s story is that life is complicated.  Demanding that Payne and his film abandon that notion and state otherwise just to make it easier for the audience is the kind of creative handcuffing that plagues message boards and comment sections to a continually greater and greater degree, by the day.  So, my challenge to you is to, in turn, challenge yourself.  Open yourself up to someone else’s ideas and at least listen to them.  And along the way, enjoy Hong Chau.  She’s a delight.