Another Thursday, another throwback!  This time, from director-writer Victor Salva (Jeepers Creepers and a whole bunch of personal issues that will not be delved into here) comes science-fiction drama Powder.  The film tells the story of genius albino teenager Jeremy (Sean Patrick Flannery) who, after his lone remaining family member passes away, is revealed to his small local town following a lifetime of being hidden away in the basement.  He encounters many of the locals in the town and is met with the expected mixture of wonder and rejection.

Salva made a strong attempt in the nineties to carve out a niche for himself in the sci-fi/horror/drama genre mix, similar to what Guillermo del Toro has done in more recent years.  Salva, however, hasn’t been nearly as successful as del Toro in doing so.  Powder was one of those early attempts.  It’s clear what Salva is going for with this story, but as obvious as the destination is supposed to be, the path to get there is a confusing labyrinth of mixed messages such that, once the destination is reached, the viewer can’t help but look around and wonder if they’ve arrived in the right place.

Powder is an earnest attempt at the classic it’s-what’s-on-the-inside-that-matters tale.  Salva attempts to mix it up a bit by making Jeremy (or “Powder”) a bit more unusual than, say, Rachael Leigh Cook in She’s All That, but it becomes a bit much and, as the film lurches on, the point of it all becomes exceedingly muddled.

Let’s start with the obvious: Jeremy is an albino.  Okay, no problem.  For starters, this alone would be enough around which to construct a movie.  People were as judgmental and superficial in the nineties as they are today, and something as uncommon as albinism would certainly kick up some issues for those who (Warning! Cliché ahead!) fear what they don’t understand.  And that happens, although not always in a particularly authentic way.  For instance, the entire narrative is kicked off by high-schoolers who behave like elementary school children.  It’s a sour beginning because how can someone who’s had to deal with this issue in real life relate to Jeremy if the problems being presented by the film aren’t reflective of their own true-life experiences?

On top of the albinism, Jeremy has . . . superpowers?  Yes, Powder can control and conduct electricity, read minds, and other assorted things.  This is apparently where his genius intellect also originates.  I understand Salva’s desire to appeal to a certain audience outside of the typical target demographic for this brand of tale, but in this case, the narrative is harmed, not helped, by this creative choice.  The idea is that the poor unenlightened townsfolk are supposed to see through the atypical outer appearance to the selfless person underneath, but that never seems to truly happen – at least not for everyone.  Instead, most people are just dazzled (or intimidated) by his supernatural abilities and often even selfishly distracted by what he can do for them.  It’s never about who Jeremy is; it’s more about how he can be used.

Beyond even that, Salva throws another issue for Jeremy to deal with into the mix, but I won’t specify exactly what it is because it’s a bit of a spoiler (it’s a common theme for Salva, however.  If you’re familiar with his work, you can probably guess what I’m referring to.).  But the whole film plays as if it wants to be a mid-nineties mix of X-Men and Wonder, yet it misses the point of both.  X-Men is about how powers create a barrier between mutants and humans, not how the narrow-minded homo sapiens somehow see said abilities as a bridge between the two.  And Wonder is about how physical differences are irrelevant and often mask beauty within.  But most characters in Powder (characters who are painfully flat and stereotypical, to the point of caricature.  There’s no complexity to be found, here.) never openly acknowledge Jeremy’s humanity.  Mix in several plot threads that are introduced and then dropped without resolution and it’s just a big mess. 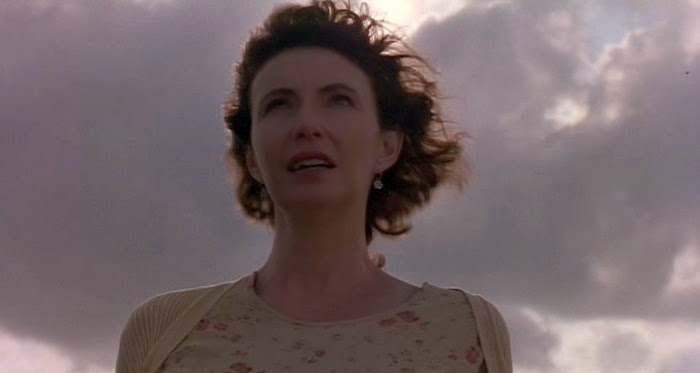 This all leads to a bizarre climax that does nothing to tie all of the loose threads together and only confuses the issues even more.  Everyone is essentially let off the hook – the villains who hounded Jeremy, the empathetic friends who worked to help him, and even Jeremy, himself.  Nobody really learns anything.  They learn nothing about themselves.  They learn nothing about humanity.  And they learn very little about Jeremy.  In a way, that’s even more poignant than the intended message because it certainly seems to jive with how the real world works.  And if I thought for one second that that was Salva’s point, I’d be praising his work, here.  But it wasn’t.  That was a total accident.  Salva’s goal was for the viewer to learn something.  But viewers watch films through the eyes of the characters, and if the characters learn nothing, the viewers learn nothing.

I’m a Jeepers Creepers fan, but Powder just doesn’t work.  I’m always happy to see Jeff Goldblum and Mary Steenburgen pop up, so I enjoyed their performances, and Flannery does fine with what he’s given, but the three of them just aren’t enough to keep this ship afloat.  If you’re looking for some sci-fi drama, I’d suggest you go check out that aforementioned Guillermo del Toro filmography, instead.  The Shape of Water is still in theaters!