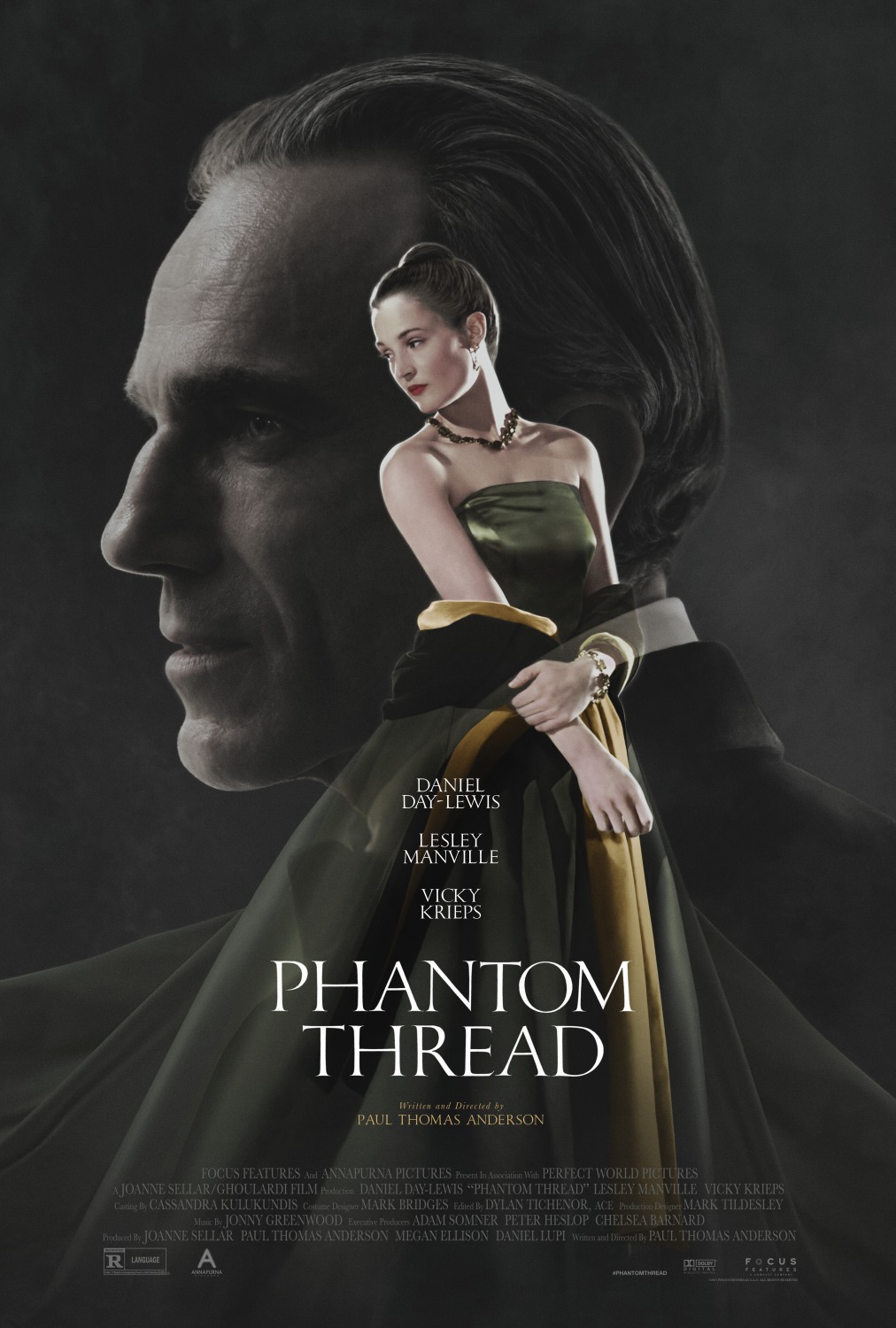 Okay, finally!  I’m close to wrapping up my major Oscar viewings!  This one has been on my radar for a while and it finally came to my area, two weeks ago.  The problem was that I wasn’t in my area, as I’ve been out of town for the past two weekends.  But here I am and that means that my Top 25 of 2017 will be coming up soon.

Perhaps the biggest claim to fame for Paul Thomas Anderson’s Phantom Thread isn’t all of the award nominations that the film has been receiving, but rather that Daniel Day-Lewis is claiming that this is his final film.  Day-Lewis has made a career out of winning awards and he has a good chance to do so, again, at this year’s Academy Awards ceremony, though he faces stiff competition in the form of Gary Oldman from Darkest Hour (for which the performance I liked, but the film, as a whole, I didn’t.  Read why here.).

I didn’t have that problem with Phantom Thread. In the film, Day-Lewis plays successful 1950s London fashion designer and self-professed “confirmed bachelor” Reynolds Woodcock. Living with his sister Cyril (Lesley Manville), Woodcock has a history of failed relationships, never being emotionally available enough to commit to anything or anyone outside of his work. Taking a country retreat to get away from the stresses of daily life, Woodcock heads to a cafe for breakfast only to become instantly infatuated with his young waitress Alma (Vicky Krieps). The spark is mutual and the two begin a relationship that is more than either bargains for, and not in the typically expected ways.

The film does start out a little slow, with certain scenes in the first act doing little to progress either the story or the characters. But even with that, there is one aspect in the early goings that I couldn’t help but notice and appreciate as Woodcock works to further ingratiate himself to Alma by designing dresses for her. Here, in the current 2018 Hollywood (and American) climate, we have a film about an older man attempting to woo a younger woman by putting clothes on her. I doubt that was intentional on the part of Anderson, but I had to smile at the idea, regardless. 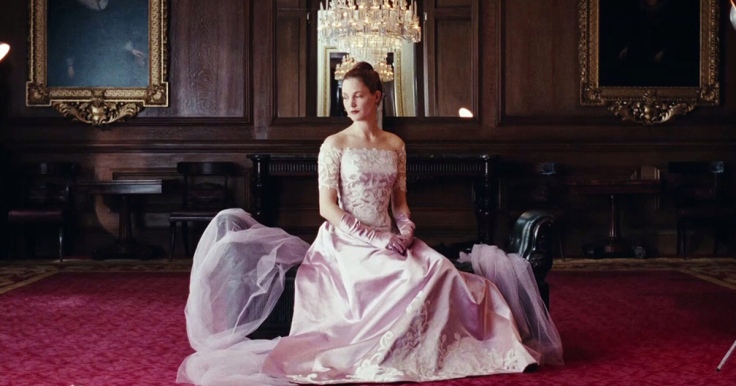 But back on topic, yes, the story takes a little while to rev up. But as it does, we get further insight into our two leads, eventually realizing that they are the story. Woodcock is not a pleasant man. Like so many, he turns on the charm during the metaphorical honeymoon period of their burgeoning relationship but, once he becomes comfortable and confident in what he has, his true self emerges. He is rude, inconsiderate, thoughtless, and unappreciative of all those around him, likely having never felt a genuine emotion is his entire life.

Meanwhile, Alma is sweet, sincere, trusting, and naive. She hasn’t been in existence long enough to have developed a healthy distrust of others’ motivations. She longs to be swept away from her seemingly mundane existence and feel relevant to the world at large. And after meeting Woodcock, that’s exactly how she feels. But the longer they’re together, the more she realizes that he isn’t the man she originally believed him to be. But she’s smarter than Woodcock realizes. And she’s a fast learner.

What I love most about Phantom Thread is how it slowly transforms itself from what appears to be a typical Hollywood romance into an unconventional tale revolving around a highly toxic and unhealthy relationship. Neither Woodcock nor Alma are genuinely in love with the other. Rather, both of them use the other for their own individual needs. To Woodcock, Alma is proof that he can secure a young, pretty, healthy woman who will be subservient and live her life as he sees fit. To Alma, Woodcock is evidence that she has a place in high society and can mix with the social elite. She feels more important to everyone because she believes she’s important to him.

As the narrative takes shape and truly begins to unfold, what develops is a high-stakes clash for power in the relationship. And, coming from two very different worlds, Woodcock and Alma also take separate approaches and have completely different perspectives on this battle. What’s most interesting is that Alma has long been waging this passive war before Woodcock even realizes that the game is afoot. As the power dynamics continue to flip and flop with each dramatic move that one or the other makes, the film becomes an enthralling exercise in dissecting exactly what we all look for in our significant others.

Throughout all of this, both Day-Lewis and Krieps give outstanding performances. For Day-Lewis, that’s just another day at work. But this is essentially Krieps’s coming out party and she nails it. My favorite scene involves the two of them having dinner at home and in that particular exchange, Krieps actually succeeds in outshining Day-Lewis. Had I seen this film when I did my Oscar Snubs column, Krieps would have made the cut. Their performances are nuanced and layered enough that a refined ability to read into their subtext is helpful, which only adds to the fun of watching them duel.

Between the grounded, authentic performances of Day-Lewis and Krieps and Anderson’s thoughtful writing and direction, Phantom Thread is the most believable and surprising film about relationships I’ve seen in recent memory. The longer the film went on, the more I loved it. This is exactly the kind of fresh take on classic themes that I crave from prestige cinema. If this is truly the end for Daniel Day-Lewis, he is going out on a high note. And with each omega, there must be a corresponding alpha, so I look forward to seeing what lies ahead for Krieps. Phantom Thread is a refreshingly sophisticated look at the selfish side of relationships that, aside from some early pacing issues, succeeds wildly on all fronts.