Here we go!  The biggest night in the film industry is just around the corner!  Every year, Hollywood’s biggest gather in order to honor the best in the industry.  Winning an Oscar can make a career.  It can transform an actor into a star.  It can catapult a film into classic territory.  Though it truly is a massive compliment just to be nominated, everyone wants to win.  Winning is worth it.  And on March 4, we’ll all find out who walks away with their name etched into film history and who walks away as nothing more than a trivia question.

This year, my column will be similar to last year’s, but I’ll be tackling any category for which I’ve seen over half of the nominees.  It’s not fair or even ethical to weigh in without seeing at least that many.

And I’m even more excited to confirm that the greatest rating system ever devised returns: THE EMILIA CLARKE STAR SYSTEM!  One single Emilia Clarke is bright enough of a star to light up a solar system, so it should be obvious that the more Emilia Clarkes, the better.  I will rate each nominee on my own personal scale of one to ten Emilia Clarkes, though one can never have too many Emilia Clarkes.  (I, myself, would be ecstatic with just one.  If anyone out there can be of any assistance in that regard, please reach out to me as soon as possible.)  If I didn’t get to the see a nominated film, I will put “N/A” for its rating.  I will then present the nominee I want to win as well as the nominee I think will win.  You can find my original reviews for almost all of these films under the menu up above.

With that established, let’s proceed, starting with the smaller awards and working up.

Want to win: War for the Planet of the Apes

Analysis: A lot of these predictions – particularly those for the smaller awards – are total crap shoots.  Historically, the less special-effects-intensive films have absurdly won the Best Visual Effects Oscar (come on, The Golden Compass, people?  Really?).  I imagine this one will come down to War for the Planet of the Apes and the more dramatic and prestigious Blade Runner 2049.  That one had some very nice effects – many of them subtle, which the Academy loves, but has anything in recent memory truly been more impressive than the talking apes?  They are completely convincing.  I’m going to go out on a limb and say that the Academy rewards the well-received Apes franchise as it comes to an end, though my gut is telling me to go with Blade Runner.  I might regret this prediction.

Prediction: War for the Planet of the Apes

Analysis: This one is short.  I predict it comes down to Phantom Thread and Victoria and Abdul but Phantom Thread is actually about a fashion designer.  So, it has to win, right?  Wouldn’t it be silly if it didn’t?!  Lots of great costuming in that one, too.

Analysis: Maybe it just my ignorance regarding what goes into hairstyling and makeup, but I really don’t know why Victoria and Abdul is nominated, here.  The other two films are head and shoulders above it with Gary Oldman’s transformation into Winston Churchill and Jacob Tremblay’s prosthetic facial deformities.  This one is truly a tossup but if I hadn’t previously seen Tremblay in Room, I would have thought his facial deformities from the film were real, so it gets my vote.  However, I expect the actual voters will want to reward Oldman and the historical drama.

Want to win: The Greatest Showman

Analysis: Why no Emilia Clarke Star Ratings ?  Because I only remember one of these songs: “This is Me” from The Greatest Showman.  The only reason I want it to win is because I think it will and I want to be right.  I’m using the same logic behind picking that one as I did in the Costume Design category – it makes sense that the best original song comes from a musical.

Analysis: Carter Burwell’s score for Three Billboards stood out to me as part of the overall experience and was a memorable component of the film in its own right – and not in a distracting way.  Greenwood’s and Desplat’s scores were largely forgettable for me.  Williams and Zimmer were excellent in their efforts, as always, but were also derivative of their past scores.  That said, I’m going to say that the Academy decides to honor Zimmer and throw an award in the direction of Dunkirk, here.

Analysis: Blade Runner 2049‘s production design was inventive and futuristic, requiring a level of creativity that the others didn’t require.  It was also the production design that completed the illusion and truly allowed the viewer to become immersed in the film and imagine that they had been transported to the world in which it inhabits.  Still, I expect the Academy to bestow Dunkirk with another award, here, to compensate for the lack of big wins in the more notable categories.

Analysis: Look, I’m not to pretend that I remember the minute specifics about the sound mixing in these or any other films.  I seem to recall which ones made more of an auditory impression, but they all sounded fine.  Otherwise, I definitely would have remembered.  I’m just going to keep picking Dunkirk to win these technical awards for the same reason outlined above.

Want to win: Why not Star Wars – Episode VIII: The Last Jedi, again?

Analysis: Okay, we have the exact same nominees as we had in the last category, and I’m using the exact same reasoning.  I’m bound to hit at least one of these Dunkirk predictions out of all of these crap shoots.

Want to win: I, Tonya

Analysis: Some good options, here.  The editing in Dunkirk failed to impress me as, just as things were about to get interesting, the focus would switch.  The others were solid at the very least, but I, Tonya took film editing and actually used it as a storytelling device.  I don’t know how it gets any more artistic than that.  Despite that, it won’t win.  But I’d be okay with my prediction, as well.

Analysis: Some interesting documentaries, here, and I unfortunately never got to see Faces Places, so I don’t know how it stacks up.  Of the other four, all have a political and/or social slant to them.  I thought Icarus was the most compelling, not necessarily by its inherent nature, but more due to the narrative structure and editing.  I expect one of the more sympathetic tales will take home the award, though.

Analysis: Whether one loved Blade Runner 2049, found it a boring chore, or fell somewhere in between (like me), it’s impossible to deny how beautiful the film is.  But with all of those nominations, The Shape of Water is surely going to rack up at least a few, and it was a great looking movie, too.  I think it wins this one.

Prediction: The Shape of Water

Analysis: This one is a complete tossup.  All five have received extraordinary praise from all circles for their screenplays.  The Shape of Water might be hurt by the plagiarism accusations.  On the other hand, said accusations might rally the troops and help it achieve a win.  This one is hard to call, but I think many voters might play it safe and go the way I would.

Analysis: This isn’t quite the race that the previous category was.  Logan will need to be happy just to be nominated.  Most likely, so will The Disaster Artist.  A lot of voters probably didn’t see Mudbound.  That leaves two.  As much as I wish otherwise, I think if Molly’s Game was the most likely to win this award, it would have garnered a Best Picture nomination, as well.

Prediction: Call Me by Your Name

Analysis: I missed out on a couple of these, but I feel that this is an easy pick.  I would call Loving Vincent a dark horse as it’s a beautiful film, but when Pixar is nominated, Pixar wins.  And they deserve to, this time, as well.

Analysis: This is a tough one.  All directors here have earned high praise for their work, but two of them have the benefit of injecting social relevance into their films and also into the industry simply by virtue of being nominated.  I think due to the attention that the category has received (looking at you, Natalie Portman), the winner will be Gerwig.

Analysis: This is a two-person race.  Many of these roles were actually rather limited in terms of allowing for any significant range or memorable moments.  Due to that, it all comes down to either Janney or Metcalf.  Janney had the more memorable character, so I give her the nod.

Analysis: This might be the easiest one to call in the whole field.  Jenkins and Dafoe didn’t really get to stretch their muscles.  Harrelson and Plummer were great, but Rockwell went above and beyond, nailing an incredibly complex role and making it all feel entirely authentic,

Analysis: Here we have another two-horse race.  This one all comes down to Day-Lewis and Oldman.  I give my own nod to Day-Lewis because there’s less of an imitation aspect to the performance.  I think voters will go the other way.

Analysis: In objective terms of performance, this is another category that comes down to two: Robbie and McDormand.  Robbie was absolutely transformative as Tonya Harding, but McDormand has really reached a lot of people on a personal level with her performance. 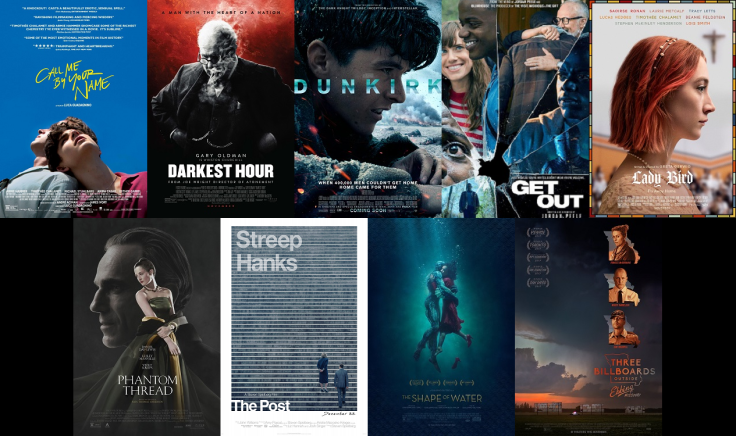 Analysis: Some great nominees, here, but it comes down to three movies outside Hollywood, California: Lady Bird, The Shape of Water, and Three Billboards outside Ebbing, Missouri.  The Shape of Water has a bit of controversy around it.  People love Lady Bird but it seems to be underperforming during this awards season. That leaves one.

WHEW!  That’s the end!  We’ll see how it all shapes up, this Sunday.  Thank you so much for clicking and reading.  Please make it worth the MANY hours that it took me to put this together and share it on social media and with your friends and family.  Thank you, again, enjoy the show, and say goodbye for another year, Emilia!