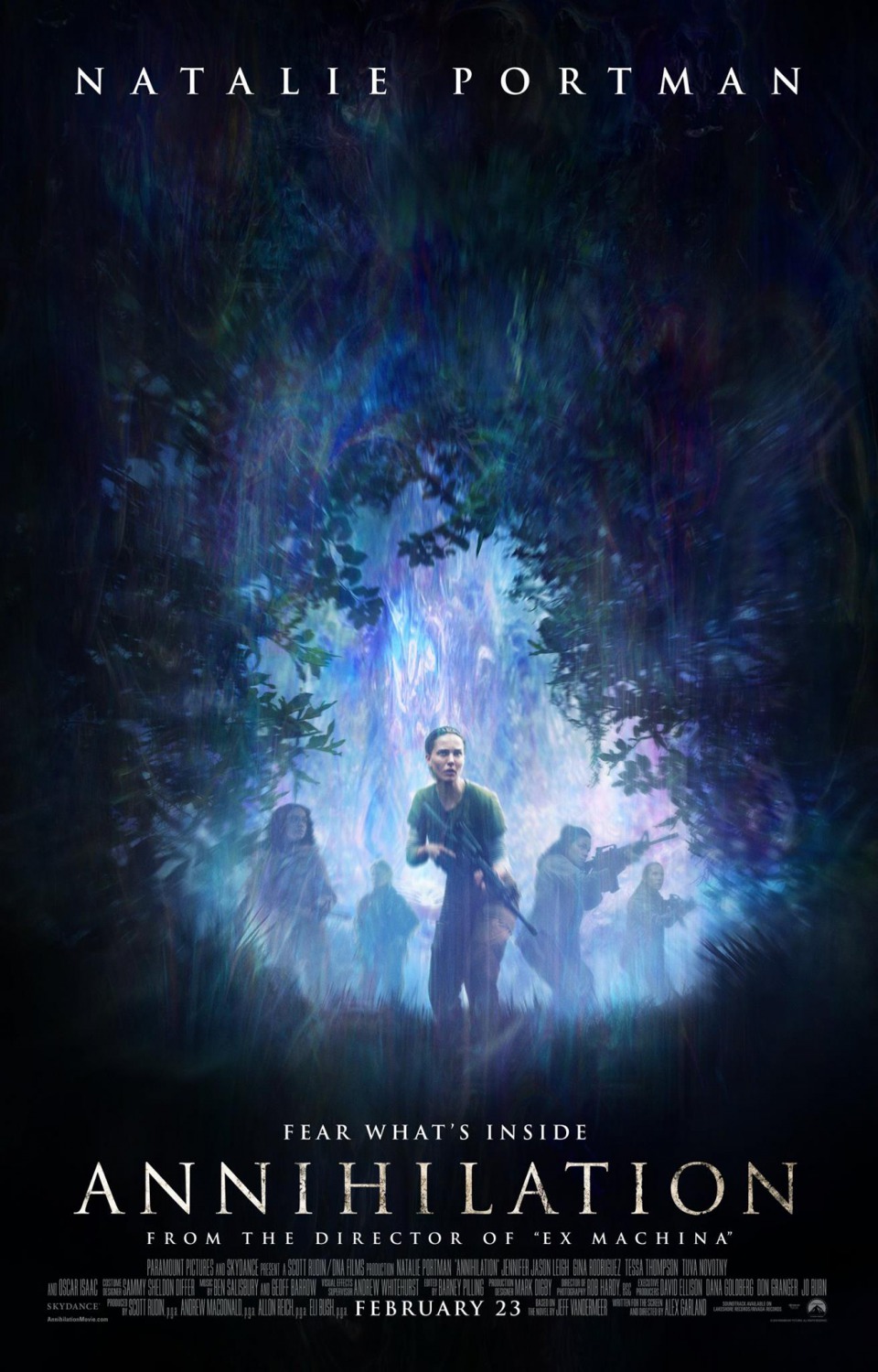 Annihilation is director Alex Garland’s second film.  He first wowed audiences (and me) with 2015’s Ex Machina for A24 Studios.  I consider that film to be the greatest pure science fiction film in recent years (maybe tied with Arrival) and so I’ve been looking forward to seeing what Garland next had in store for audiences in this film.  For this go-’round he attains a larger cast and a bigger budget, but spectacle is not where Garland’s strengths lie.  His themes and ideas have sparked the imagination of many (he wrote films before he directed them) and he always has something interesting to say.

In Annihilation, a mysterious energy field – dubbed the Shimmer – suddenly materializes around a lighthouse. As the Shimmer expands, it engulfs anything in its path, with the results and intentions unknown to anyone on the outside. After the government sends in a tactical team to recover any information and, a full year later, only one man named Kane (Oscar Isaac) returns from the expedition, Kane’s biologist wife Lena (Natalie Portman) joins a scientific volunteer group to enter the energy field and get to bottom of its origins and purpose, once and for all. 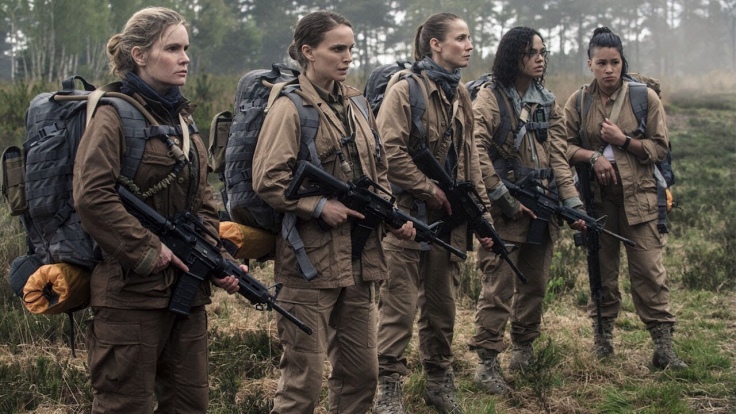 In the weeks leading up to the release of the film, I kept hearing comparisons between it and Darren Aronofsky’s mother!. The comparisons weren’t intended to equate the films in terms of content but rather in terms of style and effect and even more so in terms of expected audience reaction. Darren Aronofsky’s mother! was unique, thought-provoking, and flat-out weird: three things that most audiences have no interest in. Annihilation is also all three of those things, but far less weird (until the third act, that is) and arguably more mainstream. Both films are mysteries, as well, but Annihilation‘s mystery works more effectively on the surface, relying less on the audience’s own ability to manifest insight, which is likely the reason that there hasn’t been a vociferous outcry of anger towards this film such as Darren Aronofsky’s mother! had to weather.

I’m a bit torn about the conclusion to Garland’s Annihilation. The first two-thirds of the film are gripping and engaging, and – to me – seemingly crowd-pleasing as well. Garland’s sensibilities as on display in Ex Machina are in tact, here, as well. As in Ex Machina, there’s a sense of isolation and urgency. Something is brewing and, though exactly what it is isn’t apparent, it’s clearly going to pose a threat to our leads in some form or fashion. 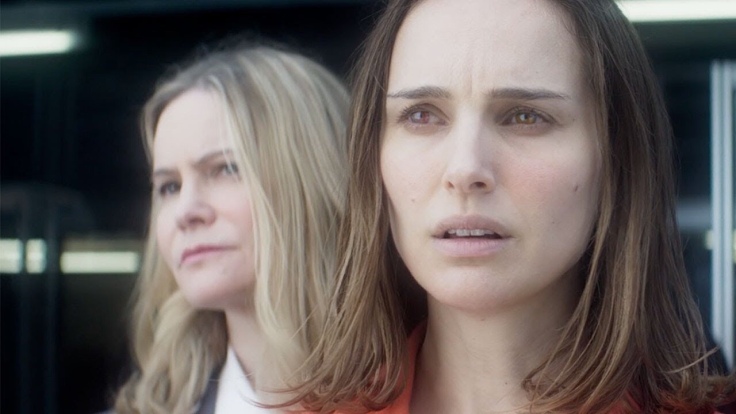 The same intelligence that Ex Machina is renowned for permeates Annihilation, as well. Not only are the characters intelligent, but so is the execution of the film. Every scene carries meaning and every line holds weight. This isn’t The 15:17 to Paris where the dialogue is so brutal that the viewer wants the cast to just stop talking. When Annihilation‘s characters speak, information is relayed, insight is provided, and everyone comes across as credible and authentic. Not one moment in the film is expendable or insignificant, and that’s a hallmark of great filmmaking.

Where the third act irks me just a bit is, again, not in the narrative turns or revelations, but in a major shift in tone. Up until this point, the movie had been very subtle and understated in its reveals. There had certainly been a couple of spectacular, pulse-pounding scenes leading up to the conclusion, but all of the events had been presented in a very palpable, grounded way, allowing it all to be processed as something that could be on the fringes of our own reality. And then: craziness.

Let me repeat that I’m fine with craziness. I even love it. And the explanation behind the Shimmer and everything we see as the viewer is perfectly acceptable to me, as well. Perhaps it’s the hasty change with which information is revealed. Throughout most of the film, the communication of information is done in a slow, steady stream, giving time for the viewer to consider each morsel before filing it away for later consideration. Then, with no warning, we are given so much information at once that we fall behind and we find ourselves watching what feels like a completely different movie. I’m not saying I did or didn’t like it. I’m saying I was surprised by it and need time to consider it.

What I don’t need time to consider is how amazing the film looks and feels. The production and creature designs are outstanding. Every time the group (comprised of five females, by the way, which is commendable) reaches a new place within the Shimmer, I instantly wanted to join them and begin exploring. For video game fans, the inside of the Shimmer feels a lot like a wilderness area would in a “Final Fantasy” game. And those creatures are simply spectacular. One of them is the most fascinating and terrifying movie monster since the Nun from The Conjuring 2. And the scene in which it is featured provides the most intense, nail-biting thrills since the Nun, as well. I can’t compliment the art teams behind Annihilation enough and they, alone, would have made the film worth seeing, even if it had nothing else to offer.

But, thankfully, that’s not the case, as Annihilation has plenty to offer. For the initial ninety minutes, I was certain that the movie was going to clock in as my favorite film of 2018, so far. It still could; I just need time to process the climax. A second viewing might help, as well. No matter the outcome of that, Annihilation still manages to double as both an adrenaline-pumping horror-thriller and intellectual science-fiction. I think the marketing did this film a disservice by attempting to position it as a generic science-fiction action flick à la Aliens. In fact, the trailer and TV spots did little to excite me, personally. Only my knowledge of Garland’s previous work had me eagerly anticipating the film. But Annihilation isn’t in any way generic. In both its genre elements and its artistic ones (including the nature versus nurture theme), Annihilation hits the mark, offering plenty of brain food while also managing to thrill and excite. I look forward to seeing what Alex Garland brings to us next.