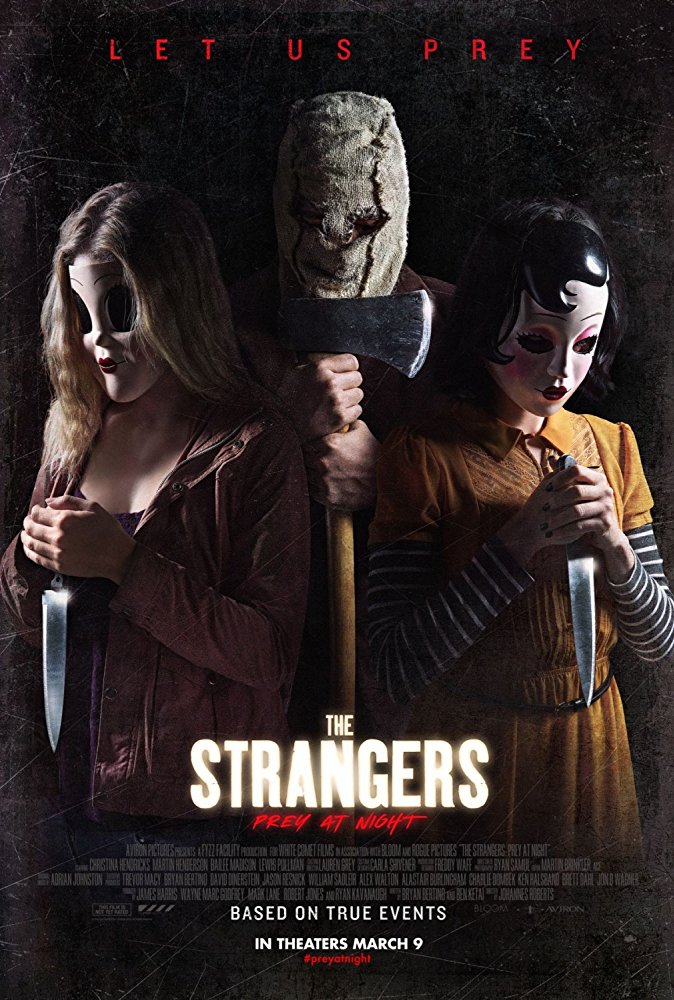 Ten years after The Strangers snuck into theaters, this follow-up by director Johannes Roberts (47 Meters Down) creeps its way into a very crowded March, hoping to find an audience who is starving for some horror.  As much as I love horror and suspense, I actually wasn’t much of a fan of that original 2008 film.  Most seemed to love it at the time, but Bryan Bertino’s initial descent into this particular franchise consisted of a lot of build and very little follow-through.  So often, the Strangers would lurk from the shadows and then . . . do nothing.  The end result was that I stopped empathizing with the theoretical victims and found myself hoping that the Strangers would attack just so something would finally happen.

So, I sat down for Prey at Night with the hopes that those particular pacing issues wouldn’t plague this loose sequel.  With a new director in the form of Roberts, who handled suspense pretty well in last year’s shark thriller 47 Meters Down, there was really no good reason to expect that they would and, fortunately, that assumption was correct. 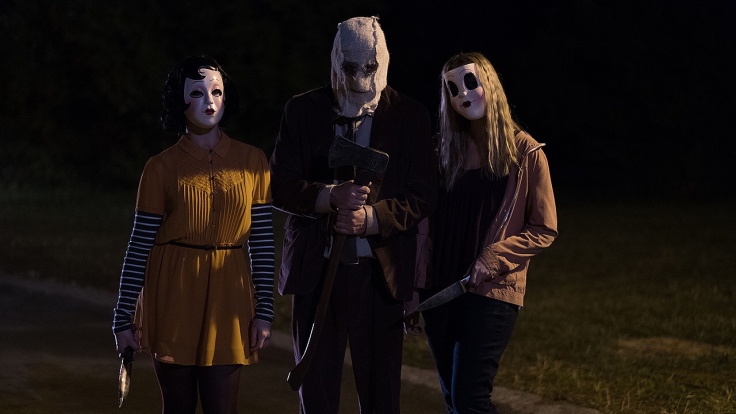 The premise here is simple (which is typically the best route in the horror genre): when parents Cindy and Mike (Christina Hendricks and Martin Henderson) make the decision to send their problem-causing daughter Kinsey (Bailee Madison) off to boarding school, they all set out, along with Bailee’s brother Luke (Lewis Pullman), to drop her off and hopefully set Kinsey on a proper path towards maturity and responsibility. But when they make a stop along the way, the family find that they have been caught up in the murderous games of the Strangers.

This series of films is advertised as being “based on true events” but the veracity of that claim is tenuous at best. Regardless, this is exactly the kind of story that we all fear will happen to us or to someone we care about and it’s also exactly the kind of story that could. That’s where the appeal of this series lies: the films are theoretically scary because they’re believable.

Maybe I’ll lose much hope of ever becoming a full-fledged mainstream critic for saying this, but I thoroughly enjoyed this second stab at The Strangers. The new Dollface (Emma Bellomy) and her crew take a much more aggressive approach towards their brand of terrorizing than did their predecessors. Horror fanatics should find plenty to revel in as the runtime is short and the pacing is quick. It takes little time for the primary narrative (as thin as it is) to get underway and for the “fun” to begin.

Once the film hits the ground running, it simply doesn’t let up. The atmosphere is moody, creepy, and exactly what the target audience is looking for in a film such as this. There are jump scares, unsettling ambiance scares, and psychological scares, and they all deliver as desired. It’s rare that I jump at a horror film, but this one got me at least twice. There are some truly disconcerting visuals, as well, and Roberts doesn’t rely on graphic blood and viscera to sell any of it. Yes, people die, and, yes, it’s a violent movie. But its effectiveness rests in its suspense, not in lazy and easy gore.

In addition to that, the cast all deliver powerful and authentic performances. Not only are the family plausibly terrified, but a couple of them even manage to fit in a moment of touching poignancy as they begin to come to grips with the situation unfolding around them. Initially, I thought I would be rooting for them to die – particularly the teen siblings. But, I’ve known many teens in my line of work, including hundreds of troubled teens when I, myself, worked at a boarding school. And Kinsey and Luke are portrayed realistically as teens who want to appear hard on the outside but are genuinely good people, underneath. By the time the family found their lives on the line, I was firmly in their corner and that is an absolute must for a good horror film.

I also found the narrative to be far less predictable than most horror movies (or even movies, in general) tend to be. Sure, there are certain pillars of horror that can’t be avoided. Obviously, people will die on both sides, and the like. But the events didn’t transpire in the ways that I expected or would have thought to have them play out on my own.

This all isn’t to suggest that the movie isn’t without its flaws. The biggest issue lies with the family and the laissez-faire approach they take to the nightmarish events as they initially get underway. More than once, a victim simply allows themselves to be attacked. They don’t fight back, they don’t struggle, they don’t resist in any way.

Lots of people make fun of horror films for regularly featuring characters who don’t make the smartest decisions in the moment. Well, I hate to break it to those people (I don’t, really) but that’s actually good writing as most people won’t think clearly in moments of high stress. But that isn’t what happens, here. In this film, on multiple occasions, fight or flight simply fails to kick in and that is not realistic or believable. Nor is there good reason for it, as the way some of these characters simply resign themselves to their fates is in no way necessary for the plot to resolve itself nor beneficial to the intensity or suspense of the moment.

That trend eventually dissipates, but it definitely interferes with the flow of the film. Other than that, The Strangers: Prey at Night is an excellent adrenaline rush of a horror experience. Its simplicity works in its favor (I needed a good palate cleanser), its cast engages the audience, and Roberts’s direction and editing ensures that the film delivers in the meaningful ways in which it’s intended to deliver. Maybe this is a Paddington 2 situation where the original installment could be worth a second look. Either way, this follow-up, while flawed, hits the spots that matter most and provides a fun, twisted escape at the movies.