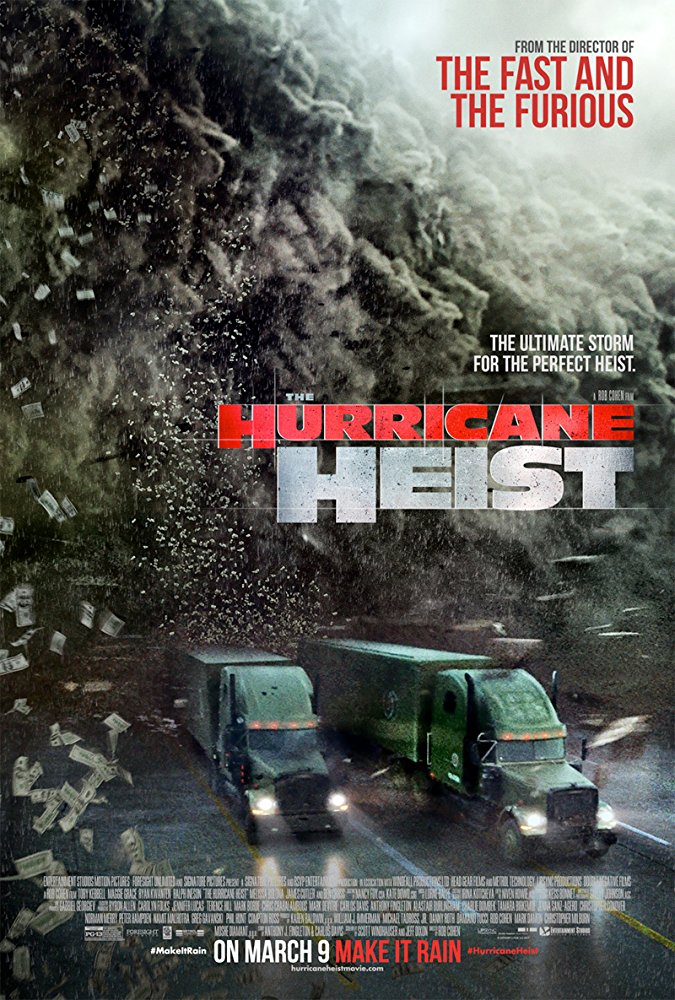 Once upon a time, a film like The Hurricane Heist would have been a must-see box office phenomenon.  It would have gotten a prime summer release date (though release date hardly matters, anymore, as we’ve seen), a huge marketing campaign, and the biggest stars who were willing and able to participate.  Money would have been no object, it would have easily made a gigantic profit, and its place as a cable staple would have been firmly established.  And it wouldn’t have even mattered if the movie was any good.  But in the modern landscape of cinema, The Hurricane Heist finds itself with niche headliners and virtually no advertising push while being dumped alongside nonexistent fanfare up against a slew of much better-positioned films and potential blockbusters, all in the wake of the juggernaut that is Black Panther.  How times have changed.

I have to say, I expected that The Hurricane Heist would be almost nothing but pure ridiculousness.  And it is, but not in as bad a way as I was anticipating.  While the film is in no way a modern cinematic masterpiece poised to become an all-time classic, with clips to be featured amongst the eighteen montages at any given future Academy Awards ceremony, it is neither the unmitigated disaster that its premise, title, and marketplace positioning would suggest it to be. 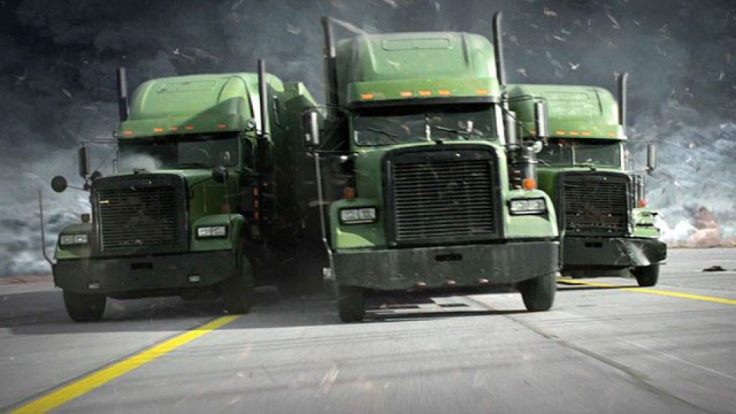 The story is exactly what the title suggests: a U.S. Treasury Mint facility is the target of a . . . you guessed it . . . heist as the thieves have timed their escapade to coincide with a massive hurricane to be used as a distraction.  Maggie Grace (nice to see her, for this massive “Lost” fan) plays the law enforcement agent who becomes aware of the impending crime and takes it upon herself to stop it.  Working alongside her is meteorologist (because, why not?) Will, as played by Toby Kebbell.

To my immediate recollection, this is Grace’s first big lead role, after taking on strong supporting parts in the aforementioned “Lost” and the Taken franchise.  She slides nicely into the position, seeming comfortable and feeling quite natural.  There’s little denying her charisma and she’s very good at being natural and believable (at least when she isn’t trying to convey that she’s a sixteen-year-old as in the first Taken film).

I have a negative association with Toby Kebbell, due to his unfortunate miscasting as Doctor Doom in Josh Trank’s Fantastic Four (you can see that #ThrowbackThursday column here) so it’s to his credit that I found him acceptable, here.  Yes, he throws on one of the worst, most overblown southern accents I’ve ever heard, leading me to wonder if either he or his dialect coach (if the studio sprung for one, at all) have ever even been south of Washington D.C. and east of the Mississippi River.  But, if one can get past that, his Will is an affable enough guy and, like Grace, Kebbell succeeds as coming across naturally.

Beyond our leads, the title of the film tells you everything you need to know.  I happen to also think that the title hurts the film, to a degree, because it just sounds so silly.  As I said, the film, itself, does not come across as ludicrous as that title does.  The film was originally titled Category 5 and I personally feel like that would have worked much better.  Though “The Hurricane Heist” leaves little room for misunderstanding what the film is about (though you never know.  I was once discussing Snakes on a Plane and someone just coming into the conversation asked me what it was about, as if there was a possibility of some deep metaphorical symbolism behind that title.), the alliteration and overly descriptive wording makes it sound like a painful SyFy movie.

It really isn’t that bad.  In fact, it’s no worse than any other reasonably generic spectacle film.  You take a hurricane, you take a heist, and there we go.  It’s a little more of a heist film than a disaster film, which did surprise me, a bit, but there’s no shortage of excitement, including some genuinely nail-biting, wince-inducing moments that are excellently staged by director Rob Cohen and his team.  But you have to expect some authentic excitement from the director of The Fast and the Furious (or so I’m told because . . . are you ready for this? . . . I’ve never seen that movie).  There are some pretty fun and even downright spectacular stunts, as well, and much of it is done practically, adding to the impressive nature of it all.

I know you probably aren’t going to see this movie.  And I know you clicked on this column expecting and hoping that I was going to tear it apart.  Honestly, that’s what I was expecting, too.  Sorry to disappoint.  Look, The Hurricane Heist is in no way the pinnacle of quality filmmaking.  Amidst the spectacular action and stunts are gaping holes in logic – obvious holes.  Though time and effort is put into giving the characters some semblance of weight, there are no subtle messages or undertones.  Nobody grows or improves as a person.  Nobody learns anything that they can carry with them into the future and use to craft a better life for themselves and those around them.  The performances are solid but the roles don’t provide the opportunity for the cast to do anything special.  And, outside of a couple of instances, there’s nothing particularly fresh or groundbreaking, even with regards to the effects and action.

But Cohen and the film are both aware of their place.  The goal is to provide escapist entertainment.  And, to a degree, they succeed.  But the world has largely moved on to requiring more of their blockbusters than just action; they want relatable, memorable characters and sharp, biting dialogue.  They want something that they haven’t seen before, rather than a slight twist on Twister (that was deliberate.  Not gonna lie.).  That’s why this film isn’t the monumental deal it would have once been.  It’s fine, considering its goals.  But “fine” just isn’t enough, anymore.  Despite that, I enjoyed much of it – especially towards the end – as I suppose it rose above my rather dismal expectations, rather than taking those low expectations and going even lower, such as . . . well, you know.  If you don’t want to head out and invest money in this one, that’s fine, though there are worse ways to spend your moviegoing time.  But if you do happen to catch it on television, one day, stop and give it a chance.