From director Scott Speer comes teen romance Midnight Sun.  Targeting the same audiences as films such as the Twilight series and heartbreakers like Me Before You, the film spotlights a pair of fresh faces in the form of up-and-comers Bella Thorne and Patrick Schwarzenegger (the son of Arnold Schwarzenegger and Maria Shriver, though he kind of looks like Armie Hammer, to me).  Also in the vein of Me Before You, this story features a pair of star-crossed lovers, one of whom suffers from an affliction; in this case Thorne’s Katie, who is unable to go out into the sunlight (or else she sparkles, right Twilight fans?  No, I made that up, that’s not true.  She dies.).

I would go so far as to suggest that it was the resounding success of the aforementioned Me Before You (over $208 million worldwide on a $20 million budget) that allowed this film to enter into production.  Movies such as this one are extremely cheap to produce and, when they hit big, it’s easy to make a profit.  Heck, sometimes it doesn’t even need to hit “big”.  So, it’s easy to understand why this one was worth the risk.

I made a Twilight joke above but the disease afflicting Bella Thorne’s Katie is very real (known colloquially as “XP”, short for “xeroderma pigmentosa”).  Those who attain it typically die young as they easily acquire skin cancer by minimal exposure to the sun.  It’s a rare condition and Bella Thorne has been quoted as saying that she took this role largely in an effort to increase awareness of the condition.

That’s noble but one of the problems with the film is that the disease is represented as a prototypical Hollywood Illness and not realistically.  There are several different methods for dealing with this condition that can help with daily life, yet none of them are attempted or even addressed in the movie.  It’s a sign of inexperienced storytellers when the authenticity of a potentially serious issue is sacrificed in order to artificially compound narrative drama.  The drama of this particular situation doesn’t require scriptwriting steroids in order to carry weight.  Better writing could have easily allowed for narrative suspense while not betraying the intent of the film. 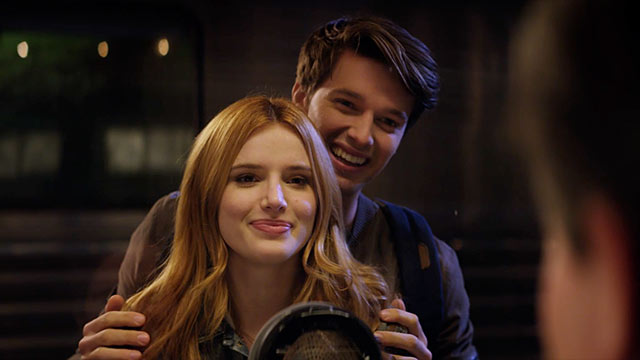 Truth be told, practically none of the film comes off as authentic.  From beginning to end, the story is filled with Hollywood conventions and tropes, making no effort to circumvent any of them.  The most obvious of these is the “young girl with a perceived flaw who needs others to validate her own worth” cliché.  It would have been nice if Katie had been found her confidence by the time we meet her and instead we could follow her on a journey of informing the world around her regarding who she is and of what she’s capable.  Alas, we instead trail her through an inauthentic “relationship” (they have one formal so-so date before proclaiming it the best night of their lives and declaring their love for one another), speaking inauthentic dialogue, forcing inauthentic humor, with, again, an inauthentic representation of a disease.

The two leads don’t help matters much.  Patrick Schwarzenegger is as wooden as Buzz Lightyear’s best frenemy.  He means well (and I’ve seen worse) but his performance got me to the point where I stopped simply wondering if he is able to emote while acting and began to question if he is capable of feeling genuine emotion, at all.  While Thorne gets better towards the end of the film, the pair of them spend the majority of the runtime acting like they think they should act instead of owning each moment, feeling it as if they are living it, and being sincere.  It’s not all bad news, as Rob Riggle gives perhaps the best performance of his career as Katie’s father Jack.  But he, alone, isn’t enough to turn the tide. 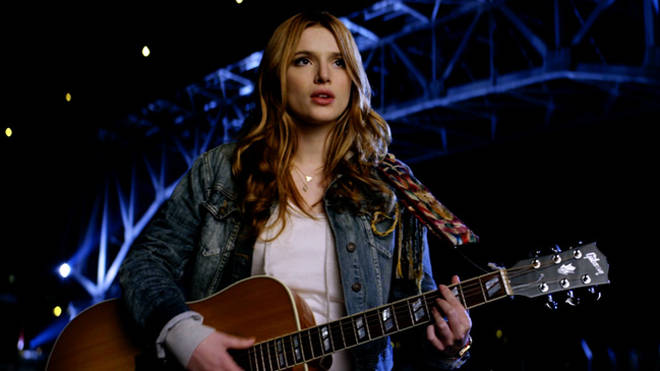 When speaking of the film’s authenticity, the relationship featured here is of the kind that is inauthentic in such a way that it can actually set young (or otherwise) people up for unrealistic expectations and damage them in their real attempts at building a sustainable social life.  For all the talk we hear about how the physical looks of movie stars can lead the typical impressionable teen down the wrong path, with a relationship like this one – forming unnaturally quickly with no complications or complexity – being portrayed as something that’s not only plausible but probable, a dangerous seed can often be planted in the mind of a young romantic with little to no life experience.  It’s important in a film that supposedly mirrors reality to do so on all levels, especially when aimed at a younger audience.  In real life, this relationship would not have gone so smoothly so quickly.

That is indicative of another issue that the film has: its laziness.  Not only does the relationship between Katie and Schwarzenegger’s Charlie lack complexity, but so do the narrative and the characters.  Clichés abound and, even when the film puts forth something to latch onto (such as the way Katie inspires those around her or the idea that life is made up of the little things), the audience is beaten over the head with it, ensuring that it’s not missed and that no one has to think too hard to squeeze any subtext out of the film.  The movie could have ended about five minutes sooner than it did and at least left the audience with some poignancy, but it insists on carrying forth and not leaving anything up to ambiguity.  Again – lazy.  The songs that Thorne performs are mediocre and lazy.  The humor is also lazy, with attempts by the characters to be funny not being witty enough to laugh at and attempts by the script at awkward humor not being (say it with me) authentic enough to laugh with.  It’s all just very unimaginative, simple-minded, and pedestrian.

There is a good film buried within the premise of Midnight Sun.  Unfortunately, Speer and his team were unable to find it.  There is admittedly a minute charm about the picture, but it’s smothered by its lack of ingenuity.  I enjoyed seeing Riggle do something meaningful for a change, and Thorne has the potential to be notable with more experience.  But Midnight Sun fails at virtually everything it sets out to do.  This story deserves a more thoughtful presentation, but thought was left at the door for this one.