Write what you know.

Spike Jonze’s Adaptation. is one of those highly regarded films that I just never took the time to watch until now.  Nominated for four Academy Awards and winning one (Chris Cooper for Best Supporting Actor), the film has a stellar reputation among film lovers – even the ones who love to hate Nicolas Cage (who was nominated for Best Actor for his performance, here).  Alas, it’s also another example of a beloved and well-reviewed film that was a financial failure, unable to earn even twice its budget back in worldwide box office receipts.  So let’s take a look at the film and why that might have been (other than the obvious fact that mainstream audiences have little interest in fresh or challenging films, as I outlined here, so long ago.  Although I failed to support it, as well, in this case.). 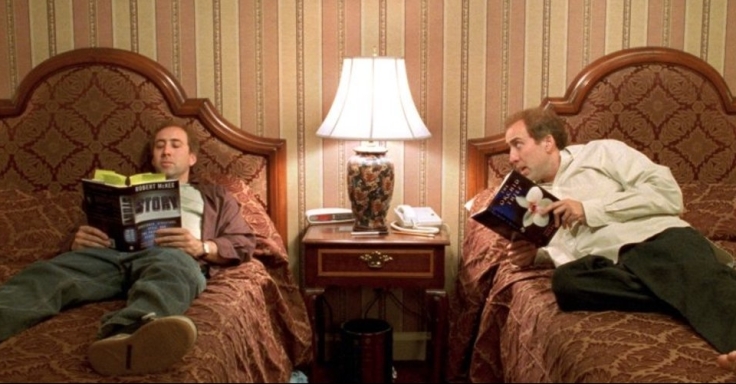 The story is a wild one.  Written by Charlie Kaufman, Adaptation. tells the story of Kaufman, himself, as he struggles to adapt Susan Orlean’s novel The Orchid Thief into a motion picture.  Nicolas Cage plays both Kaufman, along with Charlie’s twin brother Donald, who doesn’t exist in real life.  All of the other main players in the attempted real-life adaptation are represented here on-screen, as well, with Orlean being portrayed by Meryl Streep.  The whole thing is very meta and it’s often difficult to separate fact from fiction, though that ends up being part of the point as well as much of the fun.

The further into Adaptation. I got, the more ashamed I felt at not having watched it before now.  There is a lot I want to talk about with regards to this film, but first and foremost is how much I personally identified with the primary protagonist, Charlie Kaufman.  We aren’t exact clones of one another (I have a sense of humor and am generally more upbeat), but the way Charlie’s brain works is almost exactly the way mine does.  His life experiences – particularly those of a social nature – are also nearly identical to mine.  Charlie – at least this cinematic version of him – has been trained to not believe people who say they care for him or that they believe in him or that he’s capable of greatness.

Charlie’s brain never stops, with a constant internal monologue that analyzes every single person, interaction, and stimulus he experiences.  If he isolates from all of that, then he begins to analyze himself, his own abilities, and his own value.  And then he makes the leap to how he fits into the world at large and where his current status will lead him the next day, the next week, the next year, and for the rest of his life.  Then, the next moment that becomes available for self-reflection will start the process over again and he will re-evaluate his entire life and worth.  And it never stops.  This is what it’s like to be me.  Maybe it’s what it’s like to be everyone, I don’t know.  I can only speak for myself.  And that is the Stephen Davidson experience.  Every single day.

Nicolas Cage gives the performance of a lifetime, here, and earned his Oscar nomination.  Streep earns hers, as well, and Cooper is nearly unrecognizable – in appearance as well as in presence.  Had I not known to be looking for him going into this viewing, I absolutely would not have recognized him.  His Oscar win was well-deserved.  All of the primary cast have exceedingly difficult, nuanced, and complex roles and all deliver above and beyond expectations.  Cage, in general, gets a bad rap due to his penchant for overacting.  There’s no doubt that he has often been guilty of that, but in Adaptation., he reminds us that he genuinely possesses tremendous talent and can meet his potential under a director such as Jonze, who reigns Cage in when necessary.

Adaptation. is also the perfect response to those self-professed know-it-alls who claim there is no originality in Hollywood.  Setting aside their monumentally false claim that there are no films outside of adaptations and sequels, this film addresses the idea that said adaptations and sequels are easy, requiring no talent or creativity to write.  For anyone who knows anything about storytelling, that’s obvious.  But so many people think they know about movies simply because they’ve watched a handful.  They’ve never put themselves in the shoes of someone who does this for a living; they’ve never studied the art form; they’ve never ascertained why certain things work and others don’t.  Adaptation. does some of that work for them.  No successful film can be lazily or easily written, even if they are springboarding off of a story that already exists.  Filmmaking is hard for all involved, whether they be in front of the camera or behind it.

But it’s also important to note that the title of the film has a double meaning.  There’s the obvious, surface-level interpretation regarding Kaufman’s efforts to adapt Orlean’s novel, but the heart of the film centers around Kaufman’s inability to adapt to his social environment because, as difficult as adapting a book for film can be, adapting to life is much more difficult for some.  Maybe even for most.  Again, while I partially know which aspects of the film are true and which aren’t, I don’t know entirely.  And, Kaufman is brave enough, here, to write what he knows, as all writers are taught to do.  And he knows nothing better than himself.  He either portrays himself with brutal honesty or degrades himself for narrative and thematic purposes (as he does with Orleans and Cooper’s John Laroche).  Either way, it’s commendable and had to have been a very difficult creative choice to make.

The ending of the film is one of the most ingenious finales I’ve ever witnessed.  Viewers will fall into two distinct camps, here: those who get it and those who don’t.  Viewers who are engaged and thinking about more than just what their eyes are seeing will understand the mastery at play.  Those who aren’t will be taken aback and reject it.  But the climax could not have been any better or more appropriate for this particular tale.

The fact that Adaptation. didn’t win Best Picture is mindboggling, but not as mindboggling as the fact that it wasn’t even nominated.  Kaufman was nominated for his screenplay, as well, but also failed to take that prize home, which was equally criminal, if not more so.  Consider this: the screenplay was so convincing and blurred the lines to such a degree that Kaufman was nominated alongside his twin brother Donald, who Kaufman created for the screenplay and who never actually existed!  That’s a win, folks!  And then, as previously discussed, the film also failed to reach audiences and make a profit.  But perhaps it’s more poetic that way.  After all, the film is ultimately about coping with life’s disappointments.

Perhaps for the Hollywood elite, it hit a little too close to home.  For some, that may be a turnoff.  For me, it increases my appreciation.  We all feel alone in life, at times.  I often feel that way.  And films like Adaptation. remind me that, though it usually doesn’t seem as such, there are people out there who understand and identify with me and can relate to my own personal experience.