I had intended to see Deon Taylor’s Traffik on two separate previous occasions but ended up putting it off due to Infinity War fever (see that review here).  If I had forced myself to see this film when I wasn’t in the mood for it, I would have gone it with an underlying and unfounded resentment towards it and that wouldn’t have been fair.  After all, the reviews for it are bad enough already.  But, even with that, I liked the trailer and still wanted to see it and give it a fair shot.  After all, audiences seem to like it (as of the time I’m writing this, it has a surprisingly high 8.0 rating at IMDb, for what that’s worth – which might be little, these days) so there seems to be some disagreement.  Having now seen Traffik, I understand why, as the film even seems to be at odds with itself in a search for its identity.

In the movie, Brea and John (Paula Patton and Omar Epps, respectively) head to the mountains for a romantic getaway only to find themselves on the wrong side of an angry and determined sex-trafficking ring.  Along with their fellow friends and couple Malia and Darren (Roselyn Sanchez and Laz Alonso, respectively), Brea and John must not only fight for their own lives but for the lives of the innocent women who are being held captive by the ring, as well.

Despite possessing a cast of moderate size, Traffik is Paula Patton’s vehicle.  The narrative is presented from her perspective; we see what she sees, we think what she thinks (ideally), and we feel what she feels.  Patton does a mostly-fine job of carrying the weight of the film on her shoulders.  She shines during the more downplayed moments, appearing to have little to no difficulty in coming across as natural and authentic.  However, at times when she is required to show intense anger or sadness, she struggles.  This only seems to be the case during the first half of the film, as she unquestionably feels more comfortable in the latter scenes.  Maybe this makes no sense.  Maybe the movie wasn’t even filmed in chronological order and she filmed the earlier scenes last.  I don’t know.  All I do know is that, on screen during those earlier moments, Patton appears to be extremely self-conscious.  There’s no reason for her to be, though, as she proves later in the film.

The rest of the cast is fine, never really being pushed.  I do want to mention, though, that Laz Alonso’s Darren is the most thoroughly unlikable character I’ve seen in a film, this year.  That includes all of the villains and antagonists that have graced the screen in 2018.  That includes the villains in this very film.  That includes Thanos.  Darren isn’t the worst person to be depicted in film – just extraordinarily unlikable.  In contrast to traditional antagonists, Darren fakes his way through life, pretending to be one person when he’s really another.  He doesn’t even treat his own friends with basic decency and I have no idea why any of them keep him around.  To be clear, Darren isn’t supposed to be endearing.  But the fact that our protagonists associate with him by choice doesn’t speak well of them. 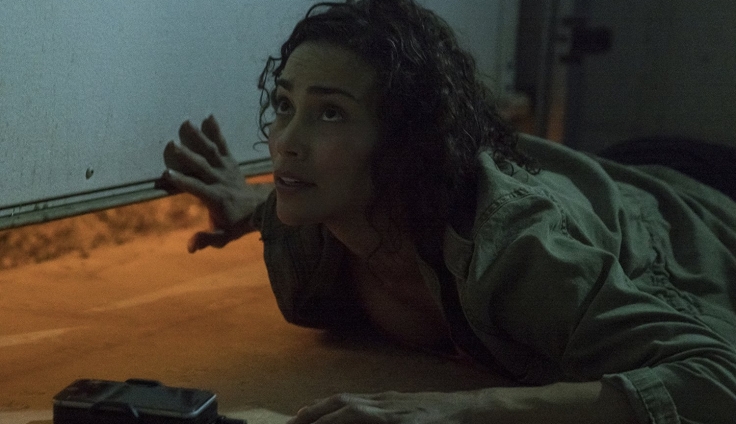 Aside from Patton, the film is dependent upon its script and director Deon Taylor to work, and I still can’t determine if it’s a success or not.  By that very admission, I suppose I’m suggesting that it’s very much not a success, but I don’t consider the film to be entirely without merit.  As a suspense thriller, it’s rather effective, with well-crafted mood and atmosphere and acceptable pacing (it takes a few minutes to rev up, but it gets there without too much delay).  And it does bring attention to the oft-overlooked problem of sex trafficking, even as it’s coincidentally been in the news, lately, thanks to the alleged shocking involvement of former “Smallville” actress Allison Mack in a sex trafficking ring of her own.

But at the same time, Taylor can’t seem to determine if he wants the film to be a public service announcement or entertaining schlock (and I use that word lovingly.  Nothing wrong with a little schlock.).  The apparent message of the film was evident early on (the name of the film, after all, is Traffik, silly spelling or not) but as I found myself enjoying the suspenseful nature of what was playing out on the screen, I felt an immediate twinge of guilt.  This sort of thing is actually happening.  Am I supposed to be “enjoying” this filmgoing experience or not?  I honestly have no idea.

And then there’s the third act twist that isn’t a twist.  It’s a predictably-Hollywood overused plot device that I saw coming in the first act (and you will, too).  It’s not that the story point doesn’t make sense; it actually kind of does.  But it’s been done so many times that, by now, Taylor and other filmmakers should be making a point of navigating around these sorts of tropes in order to give audiences something different and unexpected while staying true to their creative goals.  It can be done.  It could have been done here.  But Taylor got lazy under the guise of maintaining artistic integrity.

So, I guess Traffik is a guiltily enjoyable, utterly average film.  It’s captivating and easy to pay attention to, though it also suffers from an identity crisis, at war with itself over what it’s setting out to achieve.  Patton shows some chops, after powering through a couple of weak moments, and Taylor has a good eye, but the subject matter deserves a stronger commitment and a deeper focus in order to carry any measure of substantial weight.  Fans of thrillers will probably find something to enjoy here, though they may be questioning what that says about them, later.