It hasn’t been all that long since Star Wars: Episode VIII: – The Last Jedi stormed into theaters and thrilled most audiences and angered a very vocal few by staying true to the characters in spite of themselves and delivering a surprising story that wasn’t quite what anyone expected.  How.  Dare.  They.  (That review is here.)  Now, less than six months later, we have a new Star Wars film in the form of this prequel Solo: A Star Wars Story.  The timing follows Disney’s recent release strategy of one Star Wars film per year, alternating between so-called “mythology” films, such as The Last Jedi, and stand-alone tales akin to Rogue One (which I reviewed here).

These stand-alone stories serve as a palate cleanser after a chapter with huge revelations and implications as well as an appetizer to help audiences remain patient between the main story’s chapters.  They also allow the filmmakers more freedom as there are essentially no limits to the narrative possibilities.  In the first Star Wars Story, Rogue One, we were introduced to a brand new assortment of characters and presented with a surprisingly relevant and shockingly resonant tale that I still hear people regularly praise in everyday movie conversation.  Sadly, this second Star Wars Story has been plagued by negative press for more than a year, now, first after its original directors, Phil Lord and Christopher Miller, dropped out due to creative differences, swiftly being replaced by Ron Howard.  After that, the rumor mill couldn’t be stopped, with whispers of Alden Ehrenreich being a horrible actor, the studio being displeased, and test screenings going poorly – without any of those whispers being substantiated in any way.

At this point, if you’re putting any real faith into those sorts of conveniently-timed smear campaigns, you only have yourself to blame.  Having said that, my own anticipation level was somewhat tempered for this one, despite the fact that the perfection that is Emilia Clarke stars, front-and-center.  For one (and this is probably just me), Disney strayed from its December release pattern for these Star Wars films, which I have enthusiatically enjoyed and has been very beneficial for the series.  A full year between films both gives us audiences time to foster anticipation and allows Star Wars to dominate the holidays while Disney uses Marvel to rule each summer.  Secondly (and this is probably also just me), I would much prefer these Star Wars Stories to focus on new characters, as Rogue One did, than characters such as Han Solo, who we’ve already spent a lot of time with and have come to know well.

But none of that matters.  All that truly counts is what happens once the lights go down and the film rolls.  And, from my perspective, Solo far surpassed virtually all of my expectations.  This is an old-fashioned action-adventure film designed to thrill, entertain, and surprise; Howard and Disney deliver on all fronts.  Worry not about Ehrenreich.  While he doesn’t do a Harrison Ford impression as Han Solo, and the two actors certainly don’t look alike (to any of my own four eyes, at least), he carries the same swagger and general demeanor that Ford did in establishing the iconic character.  I had no trouble buying that this was the same person we got to know, forty years ago.  He makes the same jokes and the same mistakes as the Han Solo we all love, but he is also developing the same strengths, and we’re seeing those at their genesis. 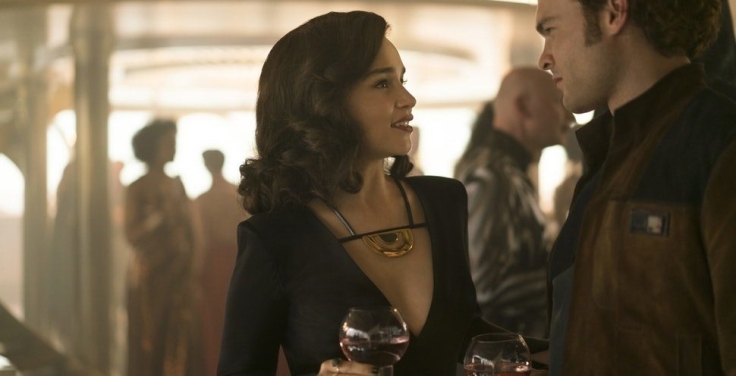 The rest of the cast – both as performers and as characters – do what they’re there to do and they each do it well.  None of them are pushed to their limits, but each bring a little something extra to their respective parts.  Emilia Clarke does small, subtle things throughout the film to give us additional insight into Qi’ra (the most complex character in the film) beyond what the script has to offer.  As Lando Calrissian, Donald Glover is as smooth as one of Lando’s many capes, and the film likely won’t be hurt as Glover rides the wave of momentum initiated by his “This is America” music video.  Woody Harrelson is perfectly cast as Han’s mentor Beckett and Harrelson is one step closer to catching up to Samuel L. Jackson as the Hollywood star in the most big-money franchises.  Speaking of, Avengers star Paul Bettany exudes charisma and menace as villain Dryden Vos.  And then there’s the token droid, L3-37.  L3 is the first female droid and, voiced by Phoebe Waller-Bridge, she’ll likely be the most talked-about character in the entire film.  Following in the footsteps (or track marks) of BB-8 and K-2SO, L3 steals scenes like they’re torrented episodes of her co-star’s “Game of Thrones” series and she will both delight and infuriate all the right people.  If she makes you mad, you deserve it.  And then Chewbacca is Chewbacca, which is always a great thing.

While the central narrative is a fairly basic heist story, it’s accentuated by all sorts of Star Wars goodness.  The creatures and aliens feel very much as though they’re ripped from the original trilogy and will certainly please old-school fans.  They even appear to be mostly done using practical effects (or convincing visual effects.  Who can tell, anymore?  No, you can’t; you’re not fooling anyone.)  The actions scenes are grand and inventive.  The dialogue and character interactions are entertaining and memorable.  And while there’s a little bit of Foregone Conclusion Syndrome due to the fact that we know many of the characters’ ultimate destinations, the script combats it with the new characters.  After all, we know Qi’ra, Beckett, and several others aren’t around for the original trilogy; we just don’t know why.

There are also plenty of surprises, which is unexpected for a prequel such as this.  Of course, if they were expected, I suppose they wouldn’t be surprises, would they?  But if you think you know exactly where it’s all headed, you’re wrong.  The film also answers multiple decades-old questions (including at least one that no one ever really thought to ask) and that added level of discovery is palpably enjoyable.  And then there’s one Big Surprise Development (it deserves the capital letters) that no one saw coming.  For the record, I liked that surprise.  BUT . . . it also creates irreconcilable issues with the overall franchise timeline.  If that sort of thing bugs you, then this will definitely have you grinding your teeth.  But, either way, it’s so fun and unexpected that it’s hard not to enjoy it on some level.

So, try not to be like those Last Jedi haters and don’t take it all too seriously.  I had a blast with Solo and I would have enjoyed it even if Emilia Clarke hadn’t been in it (though not as much, of course).  I had to settle for a standard 2D viewing, tonight, because I’m up early in the morning.  But, when I can, I’m going to try and catch an IMAX screening (hopefully 3D) and see this one the way it was meant to be seen.  Regardless, with Solo, Disney has a film likely to please Star Wars fans of all ages and generations.  Last week, I was mildly disappointed.  This week, I walked out with a smile on my face, feeling the Force flow through me.

Like us on Facebook!  And spread word of the new Movie March across your own personal galaxy!