To the utter dismay of misogynists everywhere, Ocean’s 8 hit theaters over the weekend while I was busy with family and delivered the goods at the box office, earning more in its debut weekend than Ocean’s Eleven did back in 2001.  (Sure, some will be quick to play the Inflation Card, but I’m still sitting on an idea for a column about why inflation doesn’t matter in terms of box office grosses.  I’ll write that column whenever I feel like it.)  It’s clear that Ocean’s 8 is scratching a particular itch and I personally can’t take anyone who claims to be a film lover at their word if they aren’t raring to see this cast play together, on-screen.

Sandra Bullock portrays Debbie Ocean, the felonious sister of George Clooney’s Danny Ocean from the trilogy of Ocean’s films that began in 2001.  Following in her brother’s footsteps, Debbie has an idea for a jewel heist to put all other jewel heists to shame but, as she gathers a capable team of women to assist her, it begins to appear that Debbie may have other, more hidden motivations at play.  Director and co-writer Gary Ross (The Hunger Games) has assembled a cast to die for to support Bullock in her lead role in the form of Cate Blanchett (Thor: Ragnarok), Helena Bonham Carter (the Harry Potter series), Mindy Kaling (The Office), Rihanna (Valerian and the City of a Thousand Planets), Sarah Paulson (American Horror Story), Awkwafina (Neighbors 2: Sorority Rising), and as their unwitting celebrity assistant Daphne Kluger, Anne Hathaway (Les Misérables).

Though that’s a healthy mix of established star power and up-and-coming talent, one can’t deny the appeal inherent within that particular talent pool.  Bullock’s Debbie is the clear lead, with Blanchett’s Lou not far behind.  Anne Hathaway gets to have some fun as Hollywood socialite Daphne Kluger, playing into the persistent (and unsubstantiated) whispers about her real-life personality.  And, to my surprise, it’s YouTube sensation Awkwafina who turns out to be the scene-stealer of the bunch.  Whether it’s by design or by her own doing (it’s probably a combination of the two), her character of Constance gets almost all of the genuinely funny moments and she delivers on them with a clueless earnestness and perfect timing.

On that note, the film is mostly a straight-up heist thriller with a light tone.  It’s been co-branded as a comedy in many places, but I wouldn’t quite take it that far.  There are funny moments (again, mostly from Awkwafina, yet Hathaway gets her share, too) but it’s more of a comedy in the Shakespearean sense, meaning that it’s simply not a tragedy.  As far as the content is concerned, the script is sharp enough to hold the viewer’s attention for its duration, but it doesn’t offer much beyond what one would expect from a heist thriller.  It’s fun and it’s entertaining, but it’s not reinventing the wheel. 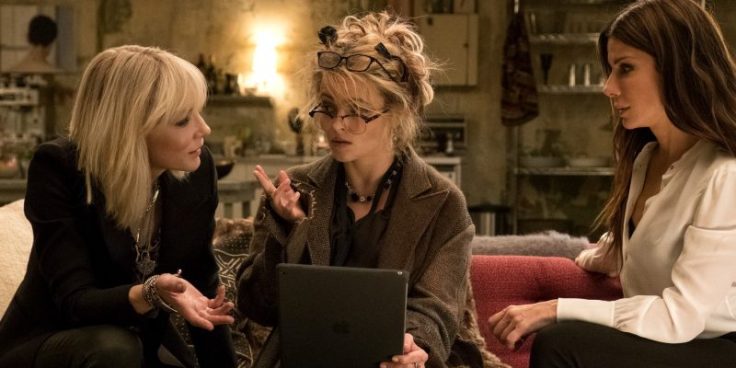 Where Ross and Warner Brothers aim to spice up the proceedings is in their choice of using a group entirely comprised of females to pull off the heist.  Of course, when the original announcement for this film was made and the premise was revealed, there was outrage everywhere from entitled sexists who want to dictate everything and believe the world of Hollywood exists solely to cater directly to them.  Just as they whined about the 2016 all-female Ghostbusters reboot (which was pretty great, though you’ll still never get them to admit as much.  My review is here.), they threatened to boycott and sabotage Ocean’s 8 solely because of the sheer GALL that Warner Brothers chose to use only women for the lead roles.

The fact that this crime caper is being executed exclusively by women is addressed within the narrative, with Debbie stating that women can pull it off more easily because of how overlooked and underrated they are.  That’s hard to argue with.  And let’s not underestimate the box office power of women, either.  In its opening weekend, the film made more than its predecessors and it did so on a smaller budget.  And female-driven films such as this one are often less front-loaded than their testosterone-fueled competition, so I expect the film to do quite well for itself, in the long run.

Despite the fact that there isn’t much new to Ocean’s 8 aside from its female ensemble, it’s still a fun time at the movies.  And let’s not pretend that most audiences want freshness or thought-provoking cinema, anyway.  So, truthfully, Ocean’s 8 should generally be a crowd-pleaser, if a relatively immemorable one.  Still, there’s a thrill in watching these talented women interact and play off of each other as their respective characters concoct and then execute their elaborate plan.  Sometimes, a film that’s pure, simple fun and can serve as a nice escape is just what the doctor ordered and Ocean’s 8 serves beautifully in that role.